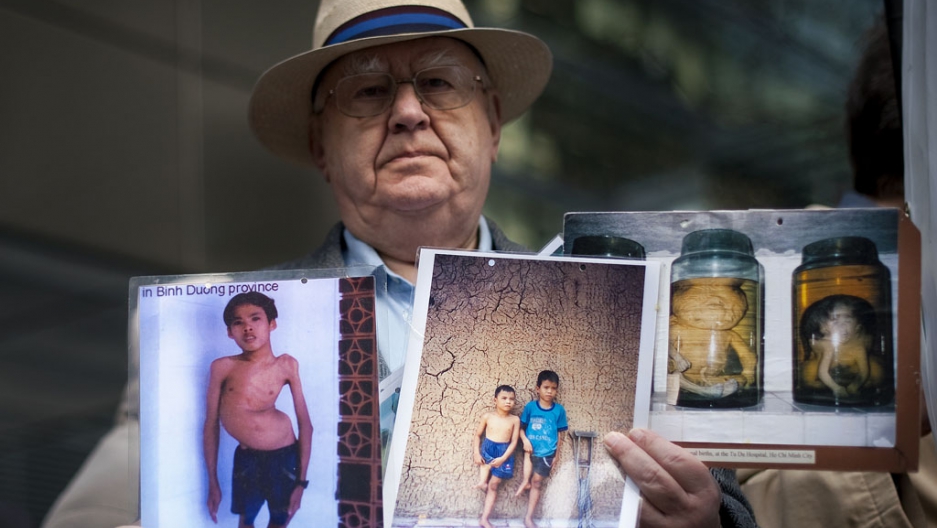 A protester against Dow Chemical's sponsorship of the London 2012 Olympic Games holds up photographs outside the venue of the final International Olympic Committee press conference in central London on March 30, 2012.
Credit: Ben Stansall
Share

The organizers of London’s 2012 Olympics call them the “Green Games” — a monument to best sustainable practice within the sports world.

The Vietnamese government says the organizers should tell that to the hundreds of thousands of children born with cleft palates, mental disabilities, hernias, lung, larynx and prostate cancer, missing limbs and extra fingers and toes.

Vietnam joined the growing chorus of protest against Olympic sponsors accused of "green-washing" their past sins earlier this month. In a letter obtained by GlobalPost, the Ministry of Culture, Sports and Tourism castigated the Lausanne-based International Olympic Committee (IOC) for green-lighting Dow Chemical as a major Olympic sponsor.

Dow produced about one-third of the 80 million liters of Agent Orange defoliants sprayed over southern Vietnam, during what the Vietnamese call “The American War.” The Vietnamese Red Cross estimates that up to 3 million Vietnamese have been affected by Agent Orange, including at least 300,000 children born with birth defects.

Vietnam’s Ministry of Foreign Affairs estimates are much higher. It says 4.8 million people were exposed, resulting in 400,000 deaths and injuries and about 500,000 children born with defects, many of which are still being born to this day — some four generations later.

“Agent Orange … destroyed the environment, claimed the lives of millions of Vietnamese and left terrible effects on millions of others, who are now suffering from incurable diseases. Hundreds of thousands of fourth generation children have been born with severe congenital deformities,” wrote Hoang Tuan Anh, Minister of Culture, Sports and Tourism in a letter to the IOC.

“Dow Chemical has expressed indifference and refused compensation for victims of Agent Orange, as well as their responsibility to clean up contaminated areas. Dow also continues to destroy the environment. In 2010, US Environmental Protection Agency listed Dow as the second worst polluter in the world,” the letter said.

Vietnam has unsuccessfully brought legal action against Dow and other Agent Orange producers in US courts. But activists say that the Communist state, which estimates the war claimed up to 2 million civilians, is caught in a legal bind. The producers of Agent Orange blame the US government for its use, while sovereign immunity shields Washington from prosecution in American courts.

This despite UN resolutions introduced starting in 1966 charging that the US was violating the Geneva Protocol on the use of chemical and biological weapons. A Manhattan court ruled in 2007, that although the herbicides contained a known poison, they were not intended to be used as a poison on humans. The ruling found that because there was no “intent to poison humans” they could not be considered a chemical weapon in violation of international law.

More from GlobalPost: London protesters gear up for Olympic Games

US helicopters and planes sprayed about 20 percent of southern Vietnam with the defoliants over a 10-year period. The goal was to strip the North Vietnamese of jungle cover and limit access to food supplies. A less reported aim was to drive rural Vietnamese who may have been sympathetic to Hanoi into US-controlled cities in what was then South Vietnam.

Millions of acres of farmland were destroyed, a move which overwhelmed Saigon with millions of poor rural migrants, and created severe health, food and sanitation crises in the city.

“It’s ironic that Dow is allowed to sponsor sporting events including Paralympics athletes when it is responsible for creating generations of severely disabled children and refuses to do anything to help them,” wrote a Vietnam Association of Victims of Agent Orange/Dioxin spokesman in an email. “Allowing such a company to sponsor the Olympics and Paralympics — a cultural event of global magnitude, is an affront to the conscience of humankind.”

Dow, the IOC and the London Organizing Committee of the Olympic and Paralympic Games ignored repeated requests for comment.

Dow Chemical inked a 10-year deal with the IOC in 2010. The agreement calls for the US-based outfit to fork out $100 million every four years as a chief sponsor of the Summer, Winter and Paralympic Games.

Dow envisioned a global sales bump of about $1 billion by promoting, ironically enough, a raft of environmentally-friendly products. They have said they will follow through with their plan to provide a plastic decorative wrap around the Olympic stadium prior to the opening ceremony and specialty stadium seats.

But it was the $11.25 million contract doled out to Dow for the 336 giant panels that will make up the decorative wrap that first sparked controversy. The Commission for a Sustainable London 2012, a watchdog body charged with overseeing the Games’ environmental credentials, was rocked when commissioner Meredith Alexander resigned last month in protest over Dow’s awarding of the stadium contract.

Campaigners believe that Dow also has ongoing liabilities relating to the 1984 Union Carbide disaster in Bhopal, India, that led to an estimated 20,000 deaths and serious injury to tens of thousands more. Dow bought Union Carbide and contends it should not be held liable for damages stemming from the plant’s deadly gas leak.

"The modern Olympics was founded here in the UK to promote peace and understanding between the peoples of the world. The Olympic values are all about celebrating our common humanity," said Alexander following her resignation, in report by The Guardian.

"But the Olympics is also big business. There is an expensive machine behind the Games that is funded by corporate sponsors. Sadly when these sponsors are selected, money talks much more loudly than values."

“Dow refuses to accept responsibility. They state they were told to make the chemicals by the US government and will not and have not paid one cent in compensation,” writes Len Aldis, secretary of Britain-Vietnam Friendship Society, in an email to GlobalPost. “Despite their record, money talks. The IOC should cancel Dow's sponsorship of the Games.”