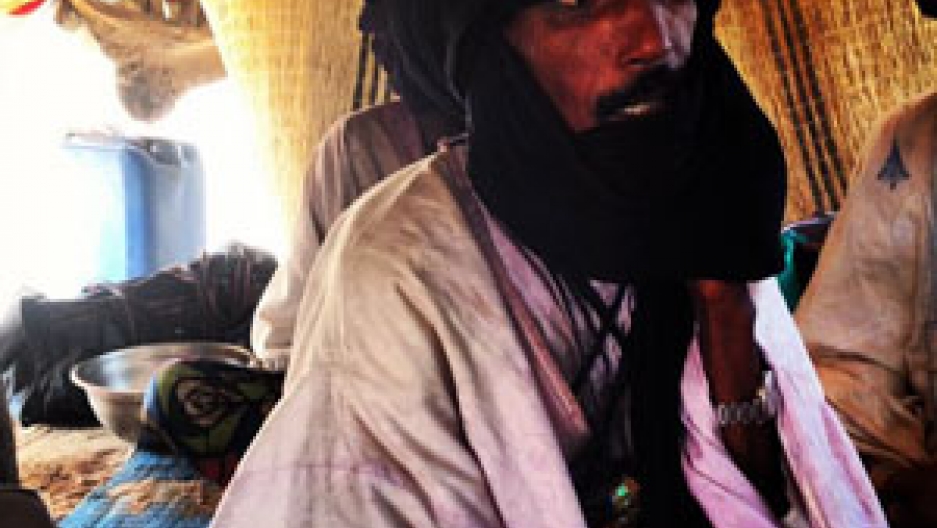 Share
Mali is in the grip of an unprecedented political crisis. It's one of the most serious crises since the landlocked West African country gained independence from France in 1960. Soldiers staged a coup in March but cannot agree on a way forward for the country. Meanwhile, Mali's Tuareg rebels have taken control of the north of the country, in alliance with Islamic militants Marine Olivesi reports from neighboring Burkina Faso, where many Tuaregs have taken shelter from the violence in their home country. Many also wish to escape the Islamists' brand of Sharia Law. The Sahel reserve stretches into the Northern tip of Burkina Faso, a land of dry bush, bare trees and patches of sunburnt grass giving way to sand. Shacks made of sticks and a patchwork of drapes and carpets dot the yellow horizon. Tuaregs fleeing fighting between Tuareg rebels and government forces in north Mali have flocked here in the tens of thousands. They're part of the 300,000 people who have been displaced by the conflict since January, according to the State Department and the UN Refugee Agency. Many in this stretch of Burkina Faso have been here before, and they've settled back into what has become a forced second home – once again. A 69-year old Tuareg says he moved back under the same tree where he'd spent almost three years in the mid-1990s. Another Tuareg, Yaya Ag Mohamed, was a kid the last time his family fled violence in north Mali. "I started elementary school here in Burkina Faso" he said. "Today, I'm a father of two, and here I am again, a refugee once more. We're pulled back into the same situation, at every stage of life." Four Tuareg rebellions have broken out since Mali gained independence 52 years ago. Each time, scores fled the military crackdown against Tuareg fighters and civilians. But in April, Tuareg rebels drove Mali's authorities out and proclaimed independence for the Azawad, the Tuareg name for Mali's Northern region. Tuareg fighters didn't manage this on their own. They joined forces with a loose coalition of Islamist groups. They shared a common enemy, but not the same long-term goals; Tuaregs fought for a state, Islamists for the imposition of Sharia law. Idoual Ag Bala, a veterinarian at the refugee camp, calls the Islamists' attempt to impose a radical form of Islam 'colonial.' "What Islam are they going to teach me? I'm already a Muslim, and that's enough, thanks God!" he said. "We don't want Sharia law. Our culture is steeped in a moderate and tolerant Islam. Their Islam is an import from Pakistan and Afghanistan, and we don't want it." Al Qaeda in the Islamic Maghreb has thrived in the region in the past few years. Now, the Al Qaeda franchise operates unopposed amidst North Mali's chaos, and new Islamist groups have emerged there as well. In Gao, North Mali's most populous city, young people demonstrated against a newly enforced ban on watching TV, listening to music and playing video games. Locals say armed groups opened fire on the protesters. Tuareg refugees say there's a lot of confusion over where the extremists come from, and how many they are. But Idoual, the veterinarian, says what they do know about them is alarming enough to keep refugees from returning home. "Americans are scared about Islamists. The French are scared about Islamists. Everybody is scared about these groups!" he said. "So why would we, poor African citizens, be any less scared? I'm scared!" Refugees who've just arrived at the camp bring stories that stoke the fears. Mohamed ag In'Tahma crossed over the border last week with 20 relatives and two other families. He says they left their village because of the new rules imposed by Islamists. They brought clothing with them, he says, a burka-like covering for the women, long clothes that cover elbows for the men. "Men can't greet women on the street," he said. "No one dares go out any more. If you're caught doing something wrong, or wearing something inappropriate, they threaten to beat you if they catch you again." Mohamed says Tuareg rebels, who support a secular republic, are starting to speak out against Sharia, but they aren't strong enough to fight back. He says most locals believe a clash between Islamists and seculars is coming – yet another reason for civilians to flee. Fatoumata Oylet Aybala, a women's leader at the refugee camp, says the best way for the international community to help defeat the Islamic militants is to recognize a Tuareg independent state. "Once our leaders are in charge, once we have a country, a government and allies, then we'll be able to fight for the traditions and values of the Tuareg people." But so far not a single country has recognized the breakaway state, and Mali could soon request help from West African countries to regain control of the lost territory. Refugees in Burkina know they might be here for a long time. Sitting on a bench in the afternoon heat, a group of young men listens to Tuareg music on a cell phone. They say at least here they're safe…. and they can still indulge in some cherished tribal tunes. This project was made possible by a fellowship from the French-American Foundation-United States. The views expressed are solely those of the author and do not reflect the views of the French-American Foundation or its directors, employees or representatives.