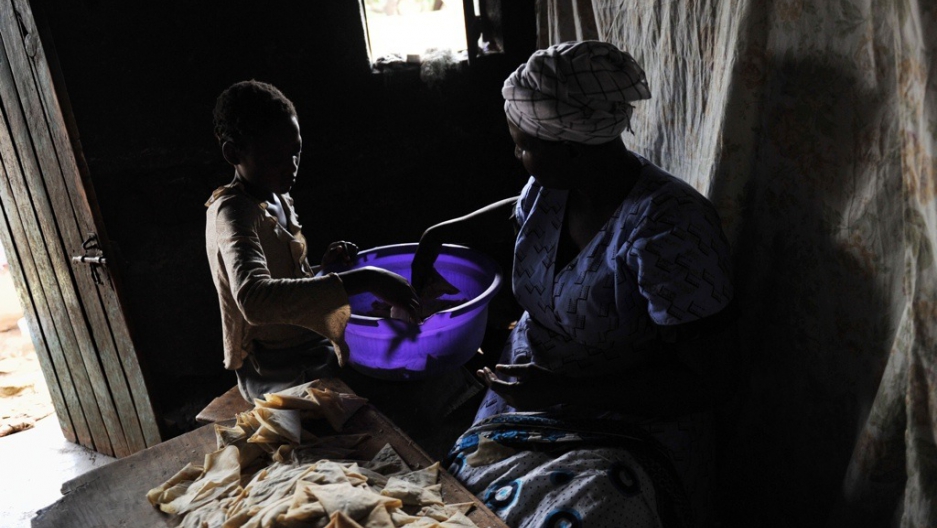 A Kenyan grandmother and her granddaughter prepare a meal.
Credit: Roberto Schmidt
Share

WASHINGTON — Nurturing is something we learn at an early age and often dismiss as a minor incidental until life circumstances get the best of us. For me this realization came a week into a three-week assignment on reproductive health in Kenya.

After several hours shooting video of the masses of local kids who inhabit the mountainside city of Kisii, I drove 45 minutes with my fixer, Samuel Siringi, a reporter for The Nation newspaper, to the rural compound where he grew up. Rain poured down and lightning struck close as we parked the car and climbed the quarter-mile path to his home in the dark.

Siringi is a health and population reporter, two important subjects in a country whose population is expected to double in the next 20 years. I wanted to see how his own upbringing in a large, impoverished family had inspired him to become a reporter, but I was so fatigued that I had chills and swollen tonsils, so it took every bit of strength to make the climb.

At the top of the hill, we entered the one-room, mud-walled, dirt-floored shack that once served as a home and birthing center for Siringi and at least 26 of his relatives. As my eyes adjusted to the light of the open fire pit inside, I found myself in the presence of two goats, a milking cow, and numerous relatives chatting in their native Kisii language as they excitedly prepared my chicken dinner.

I collapsed on the couch of the next house over, praying the cold medicine I purchased in the city would take effect. Feelings of self-pity and vulnerability quickly mixed with guilt and humility. Yes, my fever was spiking and I was in a remote location, but at least I had access to that medication. “What did these people have?” I wondered. “What do they do when they get sick?”

Siringi’s sister Margaret Nyanchera followed me in with a blanket, laid it over me, and then sat there staring and sighing helplessly. We could share only a handful of common-language words, so she did what any kind woman would do when she finds that a sad little alien has fallen out of the sky and landed in her humble abode. She plopped down beside me and began stroking my head and whispering soothingly until I fell asleep.

Nyanchera knew full well the need for nurturing amid vulnerable situations. Her mother Ebisiba Obonyo Siringi had 15 children. She and her brother Samuel are among the eight who survived. Nyanchera, whose name means “path” was given that title after her mother gave birth to her on the path we had just climbed. It was a miracle she made it, for Ebisiba had intended to hike to the town of Kisii 60 kilometers away.

An hour later Nyanchera woke me to eat. The chicken broth, the medicine, and the human affection nurtured me back to health. In the morning, Nyanchera waited for me outside the bucket shower stall with a drying sheet and my boots. As I climbed out of my rubber flip-flops, she stopped me, took the sheet, and began drying my feet, dabbing in between each of my toes just so.

An hour later, it became evident that Ebisiba, now an octogenarian, had become desperately ill, so we got her things together, walked her down that steep hill, and packed her in the car with Sam’s seven-year-old son Neville, and three other family members and friends who would all be joining us on a six-hour ride to Nairobi.

I couldn’t tell this elderly grandma that I hoped she wasn’t too miserable, so I just tried to hold her hand. At first she seemed annoyed, not really grasping back, but then she needed a bathroom. Custom wouldn’t allow her to mention this to her son, so she pulled me aside and whispered in my ear. I figured what she meant, so I took her to the privacy of the nearest bush on the side of the road while Sam and the other passengers ran an errand. When she was finished, I tucked her back inside the car to wait.

All was fine until the car alarm unexpectedly went off, and we were stuck with that horrible noise. We looked at each other with a flustered gaze until we finally broke down in laughter. During the rest of the journey, Ebisiba would grasp tight whenever I reached for her hand.

I suspect physical affection is the one thing just about every Kenyan child figures he or she can count on in this life, and that’s probably why Neville felt compelled to stick his head into the front seat and rest it on my shoulder whenever he got sleepy. I stroked his head the way Nyanchera had done for me.

As we rode through the rain toward Nairobi, I felt an overwhelming sense of comfort and gratitude for the warm, welcoming touches this Kenyan family had bestowed upon me.

It would be unfair to say that rural Kenyan families like the Siringis are happy with their circumstances. In fact, I found it alarming to overhear foreign tourists suggesting that Kenya’s poor “don’t need much” to be happy. Their warmth can be a distraction from the bigger issues — the pregnant mothers who die on the long trek to the nearest midwife or doctor, the young children who absorb deadly parasites through their bare feet as they play. But I must admit, these rural Kenyans have something we in America sometimes lose amid our modern medical remedies and concerns of invading other people’s space.

Humans need all kinds of things — adequate food and shelter, medicine, access to technology that eases their physical load — but the act of nurturing is something that can improve one’s sense of well-being, and we all have the human capacity to administer it.

Julienne Gage is a Washington-based freelance journalist and multimedia producer. She is currently serving as the coordinating producer for the International Reporting Project’s 2012 Kenya Bloggers Trip. The delegation will visit Kenya in June to investigate a wide array of reproductive health issues.