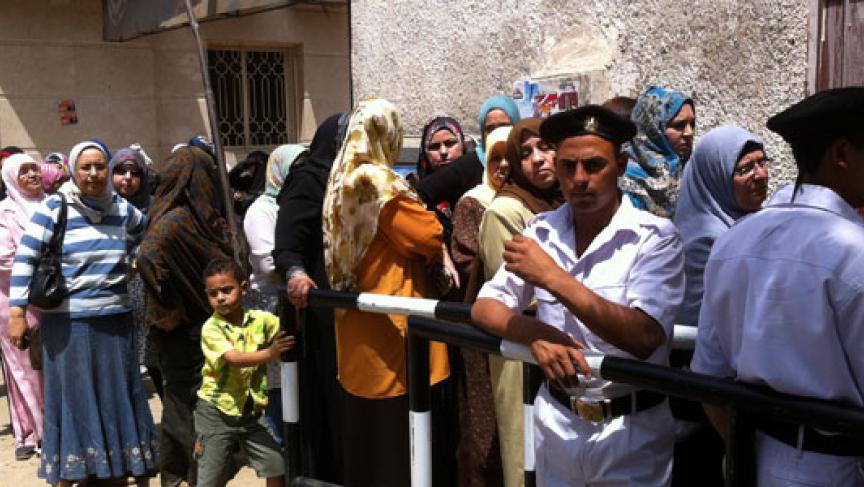 Police officers control the flow of people into polling places in Egypt on Thursday. (Photo by Matthew Bell.)

Egypt completed the voting process on Thursday in what is its first truly competitive presidential election.

Millions of people turned out to vote all across the country. The official results are expected in the coming days. But in the meantime, there are questions about just how free and how fair this election will actually be.

Tempers started to flare when the army officer asked the women to move along, saying they’re breaking election regulations by engaging in campaign activities on voting day. The women held signs that urged people to remember the martyrs of the revolution. The women said they were not supporting any specific candidate and should be allowed to stay.

Things calmed down pretty quickly, though, when the army officer let the women have their way.

It’s just one small example in a long list of alleged election violations.

In a crowded office in downtown Cairo, young volunteers at an organization called Muraqba switched back and forth between their cell phones and laptops. They started up a hotline to take calls from Egyptians to report suspected election violations.

Yosra Salah says the group has received hundreds of calls since Wednesday.  “We’ve had calls about people campaigning near polling stations – and even inside where the voting takes place.”

They’ve also gotten calls about voters filling out more than one ballot, and about officials opening polling stations late or closing them early.

For the most part, though, the reported violations have been relatively minor. Talking to voters, nearly everyone has high hopes this will be a truly fair election.

But some have doubts. Izzat Mustafa, a banker, wore a sharp business suit and stood on the sidewalk outside of a polling center near downtown Cairo.

He said he dearly wants the process to be legitimate, but there are problems, especially with voter rolls. Some people who want to vote can’t find their names, he said, and others shouldn’t be there at all, including army officers and police officers – both are banned from voting. There have also been reports of dead people showing up on voter rolls.

At the precinct, judge Osama Mohamed Bakahr, who was in charge, said he was taking these alleged infractions very seriously.

There are independent observers monitoring the Egyptian election process as well, including 50 representatives from the Arab League. Former president Jimmy Carter is also leading a delegation of monitors. But a western diplomat I met inside a Cairo polling station – who did not want to be named – told me the effort falls short of meeting international standards. She said the Egyptian government did not start working with election observers early enough and there simply not enough monitors in the country.

For some Egyptians though, the problem goes beyond how election officials and monitors are operating on the ground. Nobel Prize winner Mohamed El-Baradei says the whole episode is taking place under a cloud of uncertainty. That’s why he said he won’t be voting at all.

“I am not taking part in the election because I do not believe that there is a level playing field, that we should have had a constitution first, that they find the basic values under which every Egyptian is going to live under, that defines power of the president that we have to elect. Right now we are voting for a president that does not have his job description,” he said.

But that doesn’t mean the job won’t be filled. Despite some skepticism, much of the Egyptian public seems eager to get started with a new era by choosing a new president. Results are expected this weekend.

If, as expected, no single candidate wins 50 percent of the vote, there will be a runoff election next month.