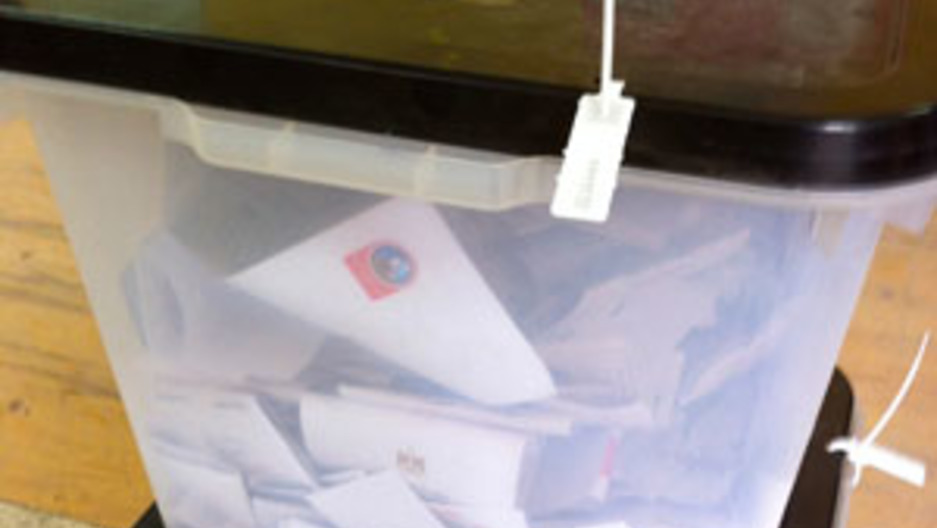 Share
The results are not official yet. But the presidential race in Egypt seems to be coming into focus. Egyptian voters this week seem to have narrowed down a field of 13 candidates to 2. The men will go head-to-head in a run-off eleciton in mid-June. One of them is from the Muslim Brotherhood's 'Freedom and Justice Party.' The other served as Hosni Mubarak's last prime minister. So, after more than a year of revolution, unrest and confusion, the presidential race boils down to this: an Islamist will run against a member of the old system. Both candidates are something of a shock. There was speculation that the Muslim Brotherhood had made serious mistakes and would suffer at the polls. For starters, it had promised not to put up a presidential candidate. And then, its first choice for the position was disqualified. Egyptians disparagingly referred to the Brotherhood's second-choice, Mohammed Mursi, as a "spare tire." But as the votes were counted at 13-thousand polling centers around the country late last night, the Brotherhood's man seems to have come out on top. The Muslim Brotherhood's Egyptian TV channel this afternoon showed dramatic scenes from the uprising, to show that he represents the hopes of the revolution, while his rival represents the old system under Hosni Mubarark. That man is Ahmed Shafiq. He's a former minister under Mubarak and a favorite candidate of Egypt's military rulers. His campaign message is about restoring order. His strong showing comes as a surprise to many observers. Even as he made a late surge in the polls, Shafiq was considered to be somewhat of a long-shot. On numerous occasions, Shafiq encountered protestors at campaign events. And when he cast his vote on Wednesday, the candidate was surrounded by a mob and had shoes thrown at him. Shadi Hamid is a Middle East expert with the Brookings Institution. He said the two choices represent opposite sides of an extreme, and a repeat of Egypt's past. "There's no doubt this is a very stark choice," Hamid said. "Complete opposites in a way. And it's almost like we're going back in time, the same kind of divide between regime and Brotherhood. And liberals now and revolutionaries find themselves in a very difficult position." And they are the big losers here: the people who celebrated the fall of the Mubarak regime, but fear the rise of the Islamists. Hisham Kassem is a long-time newspaper editor and opposition activist. Sitting on his living room couch in his Cairo apartment, Kassem's body language said it all. He looked like he'd been punched in the gut. "It's probably the worst outcome of the election I could have imagined," he said. Kassem admited that this result, the Brotherhood's man versus Mubarak's man, comes as a complete shock. "I don't think I can vote in the run-off. I don't want ever to think I gave my voice to either of the candidates," Kassem said. But it's not surprising that the law and order message from Shafiq seems to have registered with most Egyptians. Again, analyst Shadi Hamid. "The revolutionaries in Egypt haven't been popular for more than a year, so this isn't a new thing at all," Hamid said. "I mean, there were times when the military would go in and clear Tahrir Square and people would be cheering. The ruling Military Council has spent day and night tarring revolutionaries, accusing them of foreign funding, calling them traitors, that's what Egyptians have been hearing non-stop for the past year, and that has been very effective." Now faced with two candidates from polar opposite ends of the spectrum, Egyptians who find themselves in the political center have a tough decision to make. Choose between the lesser of two evils. Or don't vote at all. The final round of voting is in three weeks.