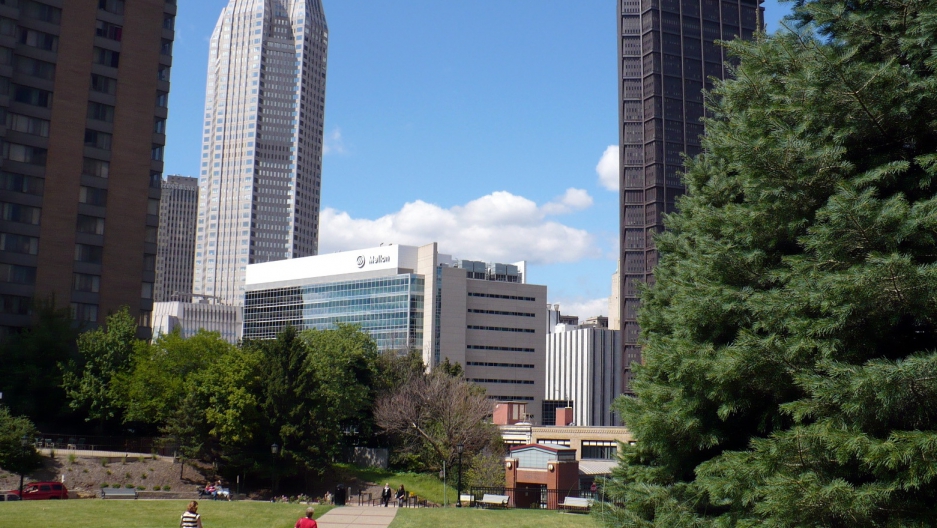 PITTSBURGH, Pa. — “Don’t tell anyone how wonderful Pittsburgh is,” said a woman I was introduced to only as “Cousin Susie.” “It is Pennsylvania’s best-kept secret. We don’t want hordes of tourists coming in.”

Looking around the city, I don’t think Cousin Susie has to worry just yet.

Not that there’s anything wrong with Pittsburgh, really.

Joe Biden seems to like the place. Last week the vice president stopped by a popular local BBQ joint called, appealingly, Hog father’s, and delivered an impassioned but folksy attack on the 1 percent designed to raise Pittsburghers’ blue-collar hackles against the wealthy Republican challenger, Mitt Romney.

But Pittsburgh is a bastion of liberalism in a state whose interior — the large area between Philadelphia and Pittsburgh — has been famously compared to Alabama.

It is, after all, home to three world-class universities: the University of Pittsburgh, known to all as “Pitt”; Carnegie Mellon University, and Duquesne. They are fierce competitors, though: Pitt’s central building, the 42-story Cathedral of Learning, is called “The Height of Ignorance” by CMU students.

Pittsburgh also boasts the Penguins, the Steelers, and the Pirates, although I am not exactly sure which team belongs to which sport.

But as I sit at a trendy bistro on the leafy outskirts of the city on a sunny morning, sipping a fairly decent latte and contemplating an extensive brunch menu, I never for a moment thought I was in Paris. Or New York. Or Dubuque, for that matter.

My dining companion is an old friend from grad school, who is now a professor at one of the three universities. He is not a Pittsburgh native, but has lived in the area for 20 years, and has agreed to be my Virgil on a tour of the town.

The first topic under discussion is, as always these days, politics. The presidential elections are on everybody’s mind, it seems. Pennsylvania is technically a “swing state” — meaning it could go to either candidate. The electorate has chosen Democrats in six of the last 10 presidential elections, and recent polls have Barack Obama comfortably in the lead, at 47 percent to his rival’s 39 percent. But Mitt Romney is working hard in Pennsylvania, and Dan, my friend, is a bit worried.

“Looking at Pittsburgh or Philadelphia, it is hard to imagine that Obama would not win,” he said, as we picked at our omelets and toast. “But just go out to, say, Chambersburg, and it becomes much easier in a hurry to imagine it.”

“It does not matter what the facts are,” said Dan. “They just know that Romney is a ‘job creator’ and that lower taxes on industry are good. They somehow feel that they will benefit. Small business owners laugh at this, but the working class — especially the unemployed — believe it.”

Pittsburgh itself, he says is doing okay. It was not hit as hard as the rest of the country by the subprime mortgage crisis, partly because housing prices were always lower here. Pittsburgh’s major financial crisis came in the 1980s when the steel industry collapsed.

Even today, says Dan, there are areas nearby that have been hit hard by the crisis and have never recovered.

“Go out to Monessen, and you’d think you were in Yekaterinburg circa 1990,” he said. Dan and I actually were both there at that time – a dying city of what was then the collapsing Soviet Union.

Once a bustling steel town, Monessen now has a population of under 8,000, according to the 2010 census.

City politics are, well, interesting. The mayor is Luke Ravenstahl, a relative youngster who took office in 2006 at the age of 26. Even now he is known to the locals as “Mayor Opie.”

Ravenstahl is a Democrat, as are most Pittsburgh mayors. The last Republican assumed the office in 1933.

The city runs on patronage, something that people tend to be proud of rather than the reverse.

“There is no such thing as ‘corruption’ here,” laughed Dan. “Instead, it’s just ‘oh, let’s hire Joe for that. He’s such a nice guy, he does a great job.’ If he happens to be your brother-in-law, well, that’s just a coincidence.”

Dan the professor is a pretty effete intellectual by Pittsburgh standards. For one thing, he is a trained linguist, and is careful about his grammar.

“People here refer to themselves as “Yinsers,” he sighed. “It comes from the plural of ‘you’ — sort of a Pittsburgh variant of ‘y’all.’ They’ll say ‘are yins coming over tonight?’”

“They embrace their own lack of culture,” he said.

The state governor, Republican Tom Corbett, is trying to balance the budget by slashing funds for education; social programs are also undergoing a “haircut.”

But there are things that Dan enjoys.

“Race relations are pretty good here,” he pointed out. “Partly this is because there are still distinct ethnic neighborhoods. Pittsburgh used to be overwhelmingly Catholic, and people clustered around their parishes. The Poles stayed together, the Ukrainians did the same, and so on. This, of course, means that there is still some segregation, with areas that are largely African American.”

Incidents, while not unheard of, are few.

After more than 20 years in Pittsburgh, though, Dan is a bit sour on the whole American Dream.

“I am a full professor, but I’m driving an old car, living in a one-bedroom rental apartment, and my retirement funds are going into my gas tank,” he said. “When it comes to the American Dream, I think we’re dreaming.”