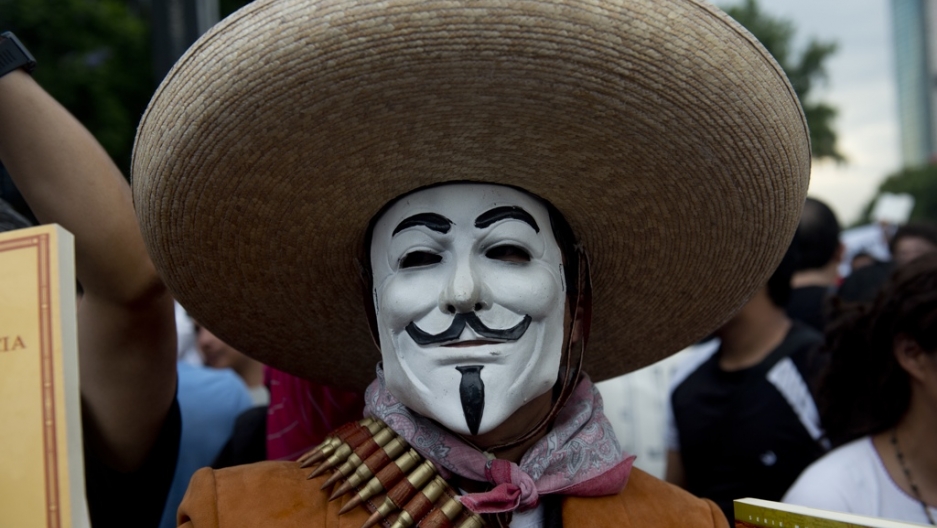 A Mexican University student dressed as a revolutionary and using an anonymous mask, takes part in a protest against Mexican presidential candidate for the Institutional Revolutionary Party (PRI), Enrique Peña Nieto, and media company Televisa, that does not hide its support for him, on May 23, in Mexico City. Thousands of university students marched along different main streets towards Zocalo square announcing a new student movement called "I am 132."
Credit: Yuri Cortez
Share

Young Mexicans are protesting their country's media for shamelessly plugging a telegenic young candidate, Enrique Peña Nieto, as Mexico’s great hope for the July 1 presidential election. He rules the polls with double-digit leads over his rivals.

Peña Nieto may look handsome, but boy does he come with a lot baggage. Leave it to the country’s youth to point that out. Thousands of students took to the streets of Mexico City this week to cry out: Don’t believe the hype! On Saturday, security officials tallied 46,000 of them, CNN reported, and as many as 15,000 hit the streets again on Wednesday.

Peña Nieto belongs to the Institutional Revolutionary Party, or PRI, which ran Mexico for seven uninterrupted decades until 2000. Mexico scholar John Ackerman describes PRI as “the Mexican version of the old Soviet Politburo." In an LA Times opinion piece, Ackerman writes that the party’s “networks of corruption and illegality” have only deepened.

This week, PRI had to suspend the membership of a former governor of the border state of Tamaulipas, who’s been accused of taking millions of dollars in bribes from drug cartels, the Associate Press reported.

Wednesday's student march in Mexico City came after an incident at the capital city's Ibero-American University, where a crowd of students heckled the presidential hopeful. His party blamed that clamor on outside influence, saying the protesters were "infiltrated" and "manipulated," BBC Mundo reports — and that really riled up the students.

Students posted a video of the jeering onto YouTube whose title translates as "131 Ibero students respond." They aimed to prove it was in fact free-thinking students who are angry that the party that ruled over their parents' generation could soon take power again. Students created a Twitter hashtag #Marchayosoy132 — I am 132 March — and took to the streets.

Mexican university students wear cardboard TVs on their heads and hold signs that say "Mexican, raise your fist and your voice."

The protesters weren't all university students. This man holds signs with images that illustrate Mexico's escalating violence. About 50,000 people have died from drug-related killings since President Felipe Calderon unleashed a military assualt on powerful drug cartels. Today, many Mexicans are growing numb to the carnage, The New York Times reports.

"As long as the media keeps lying, we will keep talking," reads this sign.

Anonymous meets Pancho Villa? This dressed up Mexican protester carries the Spanish edition of "The Independence of Nations" by historian and Boston University professor David Fromkin.