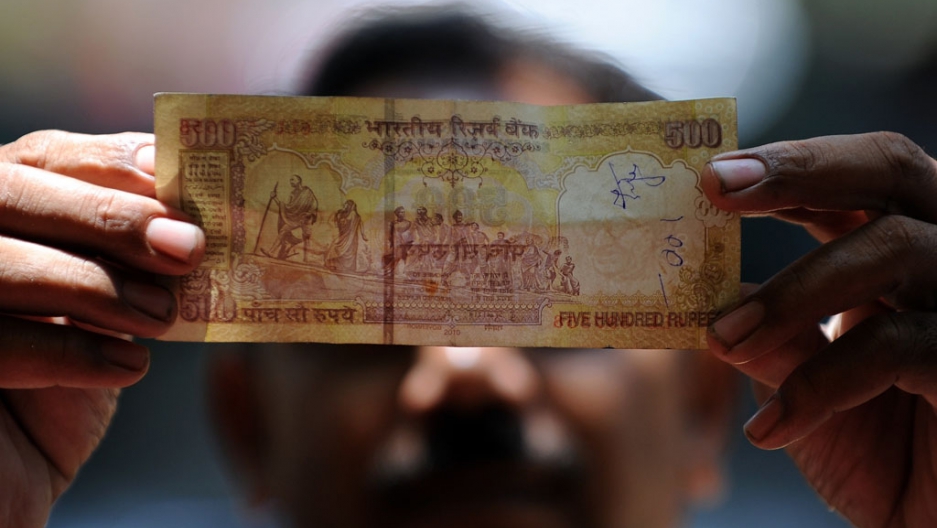 A shopkeeper holds a 500 rupee note at a roadside food stall in Mumbai on May 7, 2012.
Credit: Indranil Mukherjee
Share

COIMBATORE, India — Combating charges of “policy paralysis,” Prime Minister Manmohan Singh raised India's gas prices by the steepest amount ever on Wednesday, in an effort to woo back foreign investors and slow the fall of the plummeting rupee.

But the sudden, bold, and much needed move could well put an end to hopes of a third term for his United Progressive Alliance coalition — and could also lead to a call for early polls.

By hiking the petrol prices charged by India's state-owned oil companies nearly eight rupees per liter — or more than 10 percent — the government will dramatically reduce fuel subsidies, and thus reduce the fiscal deficit. But even though that is exactly the move that economists and investors have demanded to signal that Singh is willing to make the hard choices needed to get India's economy, and the rupee, back on track, he is already facing demands that he reverse the decision from his coalition partners.

This could be the beleaguered prime minister's moment of truth. If he faces down his recalcitrant allies, Singh could once again emerge as the hero of reforms who averted a financial crisis and put India on the path to rapid growth in 1991.

If he caves to political pressure, he could erase any achievements he has made since taking office in 2004 and send India's flagging economy spiraling. Sticking to his guns might bring down the government, forcing snap polls. And rolling back yet another policy would virtually ensure his Congress Party's failure in the next scheduled election.

For now, however briefly, the prime minister appears to have snatched victory from the jaws of defeat.

His most truculent ally, Mamata Banerjee of the West Bengal-based Trinamool Congress, has intimated that she has no plans to withdraw support for the government — despite her howls of protest over the petrol price hike. And though he has also criticized the petrol price hike, Mulayam Singh Yadav, the head of another powerful regional party that is not yet part of the UPA, was seated on the dais at a function celebrating the third anniversary of the coalition's second term on Tuesday, suggesting that Congress Party President Sonia Gandhi may already have secured Yadav's backup if Banerjee does pull out.

Still, the maneuver truly came at the eleventh hour. And it remains to be seen if it will be enough. The rupee continued to slide Thursday, setting a new record low of 56.4 against the dollar in intraday trading after closing at 55.98 the day before.

Meanwhile, unconfirmed reports speculated that a panel of government ministers will meet Friday to discuss a possible hike in diesel and kerosene prices — a move that would be even riskier politically.

How did we get here?

Since the UPA's second term began in 2009, economists and investors have been clamoring for new financial reforms that will reduce India's budget deficit and stimulate its now slowing growth. But corruption allegations that forced Singh to remove his former telecommunications minister and brought tens of thousands of protesters onto the streets weakened his Congress Party's mandate.

As a result, the prime minister was not able to push through any significant financial reforms during his government's two-year, post-election honeymoon period.

Meanwhile, despite concerns about a rising budget deficit, his government passed laws enshrining universal education as a basic right and expanding a government food subsidy to cover three-quarters of the rural population and half of city dwellers — which some estimates say will cost nearly $20 billion.

Singh's “Report to the People” at the UPA anniversary function on Tuesday heralded as achievements four bills aimed at curbing corruption by making the government more efficient and transparent — including one designed to create national- and state-level ombudsmen, which was demanded by anti-corruption activist Anna Hazare last year.

But all four are still far from being passed.

Worse, opposition from Banerjee's Trinamool Congress — a new coalition partner for the UPA in its second term — forced Singh to roll back a move to allow direct investments from big foreign retailers like Walmart through executive fiat in December, killing his only significant attempt at economic reform and sparking accusations of “policy paralysis.”

"Managing the economy has become almost synonymous with managing the coalition,” said Pai Panandiker, president of the RPG Foundation, an independent think tank.

“They [Singh and Congress Party President Sonia Gandhi] are not able to manage the coalition,” Panandiker said, referring to the opposition to economic reforms from Congress Party allies like the Trinamool Congress. “That is why they they cannot manage the economy. That is the crux of the whole problem.”

Factory output fell by an unexpected 3.5 percent in March. Foreign institutional investors — that is, fund managers in the US and Europe — pulled $140 million out of Indian markets in April, exacerbating a plunge that has seen the rupee plummet more than 10 percent against the dollar since March 1. And though most analysts say it's too soon for comparisons to the balance of payments crisis of 1991, what few measures Singh's government has taken have served only to throw gasoline on the fire.

“The final trigger came with the political outcomes in Greece and in France,” said Shubhata Rao, chief economist at Yes Bank. But the foundation was laid by "the measures introduced in the budget, which weren't really global-investment friendly.”

Breaching an unheard of 56 against the dollar this week, the rupee has been hitting record lows on a daily basis. Some say it could be headed for 60, raising the specter of a vicious cycle and a possible crisis if foreigners abandon Indian markets wholesale. But as recently as this January, when investors were looking forward to a possible rate cut from the central bank and a bold new budget from the finance ministry, it was Asia's best performing currency.

Why did it all go south? Following the disastrous rollback of the move to open the market to retailers like Walmart and Carrefour in December, Indian business leaders and global investors were hoping for an investment-friendly budget in March, if not some measures to reduce the fiscal deficit.

Instead, Finance Minister Pranab Mukherjee formulated new tax rules that made India even less attractive for investors. With the General Anti Avoidance Rule, he sought to tax investments routed through Mauritius and other tax havens — a move that made India a less attractive destination for foreign capital by reducing prospective returns.

And he proposed a retrospective amendment to the tax laws that circumvents a recent Supreme Court ruling and will force Vodafone to pay some $3.5 billion in taxes and penalties associated with its 2007 acquisition of Hutch Telecom.

Though implementation of the General Anti Avoidance Rule has been delayed until 2013, the message sent to foreign institutional investors, as well as companies seeking to make acquisitions or other direct investments in India, was that the rules could be rewritten at any time.

With the most pessimistic analysts predicting that the rupee could fall as low as 60 before Singh's move to hike petrol prices, the danger was growing that stasis would spin into crisis. So far experts agree with the finance minister that it's too early to press “the panic button.” But because perception can be as important as hard economic data in determining the flow of investment, the tipping point is impossible to predict.

“A panic comes when there is a substantial outflow of foreign money — what is called hot money,” said Panandiker. “If foreign institutional investors sell here to take money out, what happens is that there's a crash in the share market, and the money going out will also result in a fall in the value of the rupee.”

The result is a vicious cycle. The more the rupee drops, the riskier investing in India becomes, because the risk of currency depreciation compounds the risk of a drop in share prices.

So at some point, the further the rupee drops, the more money foreign investors pull out of India, and the more money investors pull out, the further the rupee drops. The only thing the central bank can do then is to intervene directly to buy rupees and try to prop up the currency's value to break the cycle. But there's a limit to how much the Reserve Bank of India can spend.

The good news — and the reason most analysts remain guardedly optimistic that India can get back on track — is India's central bank has much more in its kitty today than it had in 1991.

Prior to the 1991 balance of payments crisis, which spurred the liberalization of the economy responsible for India's rapid economic growth, the country's forex reserves had dwindled to $1.2 billion, hardly enough to finance three weeks of oil and other imports. Today the central bank has around $290 billion in reserves to play with.

But the bad news is that a substantial dip in those much larger reserves could still have dramatic effects, said Panandiker.

“If it starts unloading the reserves, that can create a kind of panic situation,” Panandiker said. “If the outflow is about $10 billion, then this kind of crisis situation comes.”

According to Crisil's Joshi, the central bank has wisely stuck to the sidelines so far, as intervening and failing could be far worse than letting the rupee find its own bottom. But nobody can predict what might happen in the future.

“It's like going to a doctor. He can tell you that your blood pressure is rising, your sugar levels are dangerous, and you probably are getting clots in your arteries, but he can't tell you exactly when the heart attack will happen,” Joshi said. “With the economy, the parameters are becoming worse, just like the patient I was talking about. When will it translate into a heart attack [like 1991]? I don't think anybody can say.”

One thing is clear, though: It's time for the patient to make some lifestyle changes — which is exactly what Singh has prescribed.