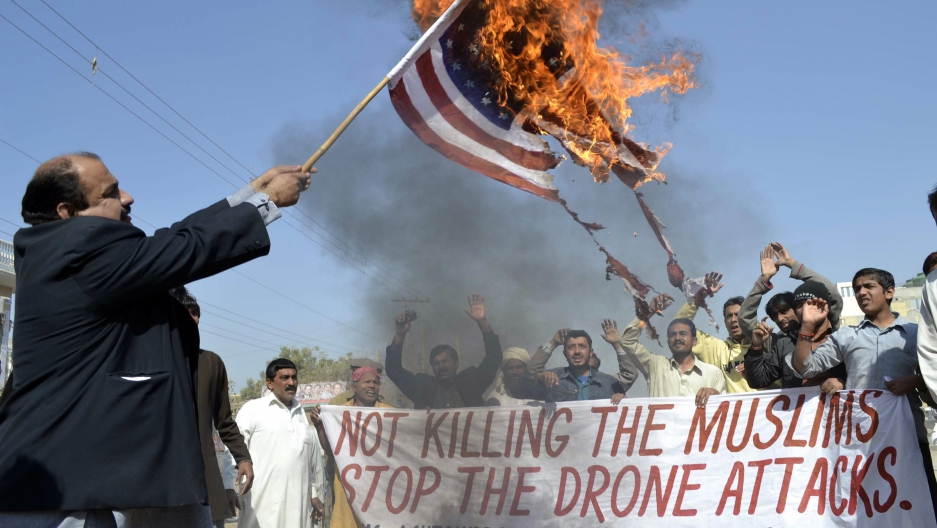 A Pakistani protester holds a burning US flag as they shout slogans during a protest in Multan on February 9, 2012 against the US drone attacks in the Pakistani tribal region.
Credit: S.S. MIRZA
Share

A US drone strike hit a village mosque in northwest Pakistan early Thursday, killing at least 10 people, according to reports.

It was the second drone strike within 24 hours in the North Waziristan tribal area.

Four suspected militants were killed yesterday in a drone strike on a compound near Miranshah, the main town of North Waziristan, the Press Trust of India reported.

The strikes comes at a time when diplomatic relations between the US and Pakistan have worsened over Pakistan’s refusal to reopen NATO supply routes shut down last November.

President Asif Ali Zardari left the NATO Summit on  in Chicago without announcing any move to reopen supply lines for foreign forces in Afghanistan.

Islamabad has rejected pressure from Washington to mount a military offensive in North Waziristan, PTI reported.

US and Afghan officials say the area is a safe haven for the Haqqani militant network, Taliban and Al Qaeda.

In the Thursday attack, a pilotless drone fired two missiles in the attack against a militant hideout in Khassokhel village near Mir Ali, the Associated Press reported.

The AP quoted officials as saying most of those killed were Uzbek insurgents.

Local tribesmen said 10 bodies were pulled from the debris and that efforts were underway to retrieve others, NBC News reported.