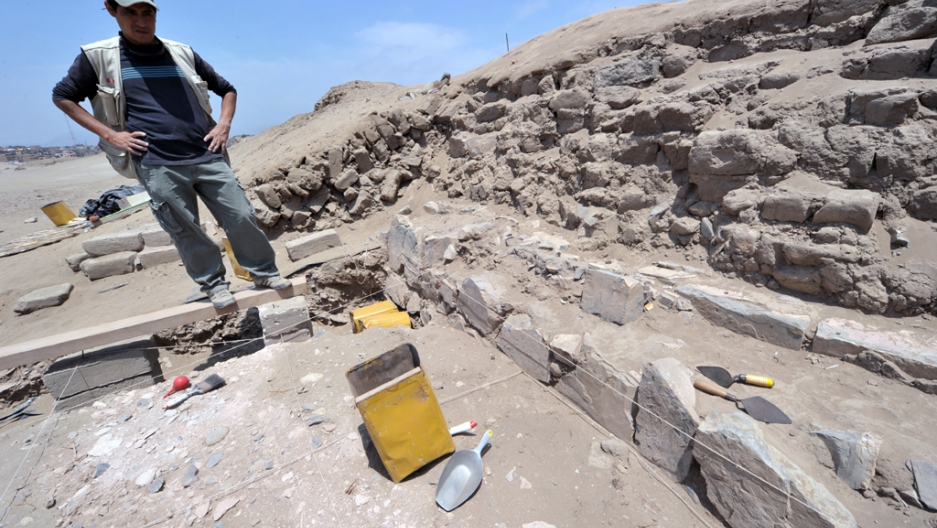 Archaeologist Jesus Holguin visits the excavation site at the Inca Sanctuary of Pachacamac on Nov. 9, 2010, where the remains of six canines and four children were found, in the coastal desert strip 30 km south of Lima.
Credit: CRIS BOURONCLE
Share

Belgian archaeologists have discovered a massive 1,000-year-old tomb in Peru containing more than 80 skeletons and mummies, many of them infants.

The 60-foot-long, oval chamber was uncovered at the site of Pachacamac,‭ ‬about 20 miles south of Lima, and was covered with a roof of reeds supported by shaped tree trunks, Discovery News reported.

Pachacamac was ruled by the Ychsma lords from 900 A.D. to 1470 and was rich with temples, plazas and mud-brick pyramids with ramps, according to Discovery.

The intact tomb was unearthed in front of the Temple of Pachacamac, somehow surviving the intense pillaging during the colonial period, the University of Brussels announced on its website.

A dozen newborns and infants were distributed around the perimeter, while the main chamber was separated into two sections separated by a wall of mud bricks that served as a base for yet more burials, UPI reported.

Seventy skeletons and mummies were found inside those sections, representing both sexes and often accompanied by offerings including copper and gold artifacts, masks and ceramic vessels, according to UPI.

Archaeologist Peter Eeckhout and his colleagues have been excavating at the site for two decades, focusing primarily on Inca storage facilities and a more ancient cemetery, the Los Angeles Times reported.

Research suggests many of those buried there might have traveled to the temple in search of a cure for several serious diseases. It is not yet clear whether the infants died naturally or were sacrificed, Eeckhout told the LA Times.