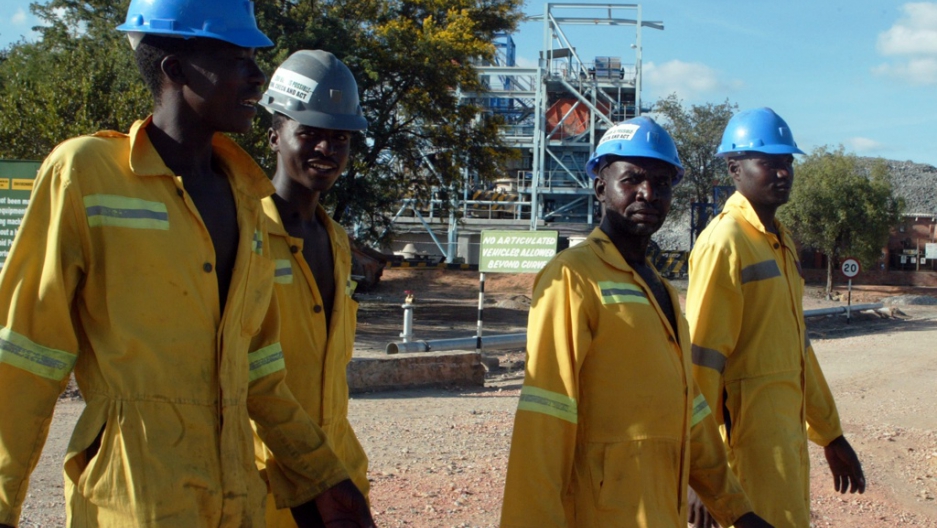 Workers at the Mimosa Mine in Zvishavane, on February 16, 2012. 65 miners were rescued after being trapped in the Mimosa mine for nearly 24 hours.
Credit: Jekesai Njikizana
Share

Some good news from Zimbabwe.

At least 65 miners were rescued after being trapped underground for almost 24 hours, reported Zimbabwe's NewsDay.

The miners were stuck 330 feet underground at the Mimosa Platinum Mine in the central town of Zvishavane, 200 miles southwest of Harare, on Monday evening when a conveyor belt collapsed and caught fire, blocking the exit shaft. Twenty miners were pulled out of the shaft quickly but 65 others were stuck underground. They moved to refuge bays before they were rescued, according to Bloomberg Businesseek.

Rescue teams came in from surrounding mines to help evacuate the trapped workers and put out the raging fire, reported the state-owned Herald newspaper.

The trapped miners used safe breathing aparatus while beneath the earth, but they may have been exposed to toxic gases that could cause longterm health problems, according to the Herald report.

Mimosa Mine is the second largest platinum mine in Zimbabwe. It is jointly owned by the Mauritius-registered Aquarius and South Africa's Impala Platinum known as Implats. Zimbabwe has the world's second largest deposits of platinum after South Africa.

Zimbabwe is working to improve its mining safety. Last year at least 23 miners died, most of them in small-scale mines where safety regulations are not strictly enforced, reported The Zimbabwean.