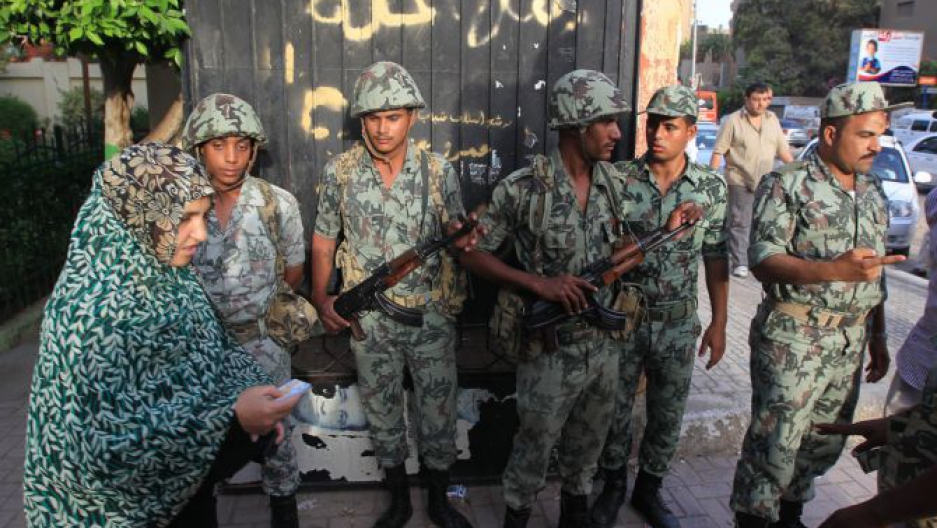 Soldiers stand guard as as Egyptian woman wait to enter a polling station in Cairo on May 23, 2012, during the country's first presidential election since a popular uprising toppled Hosni Mubarak. Egyptians vote in historic presidential elections contested by Islamists and secularists promising different futures for the country after the overthrow of veteran dictator Hosni Mubarak.
Credit: Mahmud Hams
Share

It is unwise to try to predict anything in Egypt these days, but there are several safe assumptions that can be made as Egyptians head to the polls Wednesday and Thursday to elect a civilian president in the first open and fair elections in Egypt’s 7,000 year history.

Watching the dramatic uprising of Tahrir Square unfold as it did last year with the toppling of Hosni Mubarak changed everything.

A place that was known for at least three decades for its unbearable stasis was suddenly and radically transformed by the ‘January 25 Revolution.’

And now, 15 months later, it’s hard to overstate the momentousness of this election: What a new presidency and, eventually, a new constitution will mean for the role of the powerful Egyptian military going forward and what it will means for the civil rights of women, religious minorities, and a strong but dormant labor movement. The extent to which the Islamists — both the political party of the Muslim Brotherhood and the more puritanical Salafist movement — will shape the constitution and the future of the country.

With so much at stake, it is almost impossible to predict where this still ‘unfinished revolution’ is headed right now. But at the risk of being wrong, here are three safe assumptions:

The first is that this election will not produce a winner. The contest is almost certainly headed for a run-off vote starting June 16. Some analysts would argue that current polling, if it is even remotely accurate, mathematically guarantees that no candidate can receive the required 50 percent of the vote to win in this round of voting. If a candidate fails to take 50 percent, as the election rules state, then the two top candidates are to face each other in a run-off. So don’t hold your breath. Just wait for June.

The second is that this will ultimately be a contest between the old guard and the Islamists. Although there are five leading candidates among the 13 names on the ballot, there are really only two choices available in this election. That is the “falool,” Arabic for “a remnant” of the old regime. Or there are the Islamists who have emerged from the vast power base of the Muslim Brotherhood.

The third assumption is that the struggle for the future of Egypt has always been about the powerful grip the military holds over the country and has held for the last 60 years. So even the most optimistic of souls presume the Supreme Council of the Armed Forces, the group of generals who have been handed the direct rule of Egypt and its 80 million people during the period of transition from the uprising to this election, will not let go of its power – and its sprawling financial empire – any time soon.

Okay, so to get back to what is going to happen in this election, which will take place over the next two days. Counting all of the paper ballots by hand is expected to take closer to a month.

On the ballot, there are three leading “falool,” or “remnant” candidates who represent the old guard. They include:

Amr Moussa, 75, a former foreign minister under Mubarak and a former secretary-general of the Arab League. He has pitched himself as an elder statesmen who has sufficient separation from Mubarak. He points to his international standing and global contacts as a strength in helping to lead Egypt out of the political and economic crisis it has been since Mubarak was forced to step down. Most polls, including the venerable Al Ahram Center for Strategic and Political Studies, have Moussa as the front runner but  his critics say he is an undeniable product of the regime.

Ahmed Shafik, 70, a former Air Marshal in the military and the last Prime Minister to serve under Mubarak in the dying days of the regime. He proudly boasts that he is on good terms with the Supreme Council of the Allied Forces and has vowed a strict crackdown on protesters. He seems to be appealing to a yearning in many more conservative corners of Egypt for an end to the climate of uncertainty that the revolution and rolling demonstrations have produced.

Hamdeen Sabahi, 57, leader of the Dignity Party, which harkens back to Gamal Abdel Nasser and his pan-Arab nationalism. He has some standing as a former part of the opposition. But in a historical sense he is even more old guard than Mubarak loyalists as his party romanticizes the very beginning of what turned out to be 60 years of military rule under former military officers who empowered a vast army to enrich itself through its own financial empire and allowed it to control almost every aspect of daily life.

And there are two leading Islamist candidates:

Mohamed Mursi, 60,  of the Muslim Brotherhood is the more conservative Islamist candidate who the Brotherhood put up after rethinking the idea of holding back to consolidate its power in parliament and trying to appear not to be coming on too strong.

Neither one of these two choices – not the old guard nor the Islamist – bodes particularly well for the Egyptian people who came to the streets demanding change and the end of a police state. At first, the military was on their side in this struggle, but then the military forcefully exerted its power. And none of the leading candidates from either the old guard or the Islamist have voiced any clear plan to push the military to fall in line under a civilian government and its democratic institutions.

The choices before the electorate also seem to run up against American diplomacy in the region which should be aligned with the pro-democracy yearnings of the protest movement.

I would emphasize the word “should” be aligned with the pro-democracy movement when speaking of American diplomatic interests. It is not clear that American foreign policy “is” aligned with these forces. The United States has been fairly criticized for being late in recognizing the sweeping call for change in the Arab world, a series of events that began as brush fires in Tunisia and Egypt that caught on in Yemen and then Libya and that is now an inferno in Syria and burning out of control.

On this day as Egyptians head to the polls in the first free election in the country’s history, the US finds itself in a difficult position. It wants to support an orderly democratic process for this key ally and the most populist nation in the Arab world.

But it remains to be seen whether the US will push the military – and whether it will use the $1.3 billion in financial assistance as leverage – to relinquish its grip on government as it has vowed to do when a new president is sworn in. It also remains to be seen whether the US will  engage with the Muslim Brotherhood if they take the executive branch in addition to the clear plurality in parliament which it has already clinched with some 40 percent of the total seats.

The quiet hope inside the American Embassy, political analysts say, is a return to stability, a safe candidate from the “falool,” a ‘remnant’ of the old regime who will not challenge the authority of the military and challenge the US to face the long-standing hypocrisy of calling for democracy while preferring stability.

And if this acquiescence to the past stasis and a bow to the authority of the Egyptian military is indeed what the American diplomats want, they are likely to get their wish.

So right alongside the three presumptions, there is also one great but fading hope. That is, that the Egyptian people, who have seen the life sucked out of this revolution upon which they had hung so many hopes, will find a way to restore their faith in their country’s capacity for change, perhaps further down the road, by turning out in huge numbers at the polls. With long lines for voting reported in the working class warrens of Alexandria and the elite pockets of wealth in Cairo and the vast underclass of the rural villages of Upper Egypt, there is good reason to hang on to that hope.