If you haven’t been to Toronto in a while, you might not recognize the place. The skyline is starting to look a lot like Manhattan. And it’s not just the new buildings that resemble New York. So do the housing prices.

Real Estate agent Kevin McCarthy showed me around “Museum House,” one of Toronto’s many new luxury towers. A 2000-square foot, two-bedroom and den suite is listed at $2.1 million CAD.

“The finishes are of the highest quality. Features such as every suite has direct elevator access, and you step out your front door, and there are world class dining, and shopping, and theater, there’s everything here,” said McCarthy, showing me around.

Good living... if you can afford it. The penthouse goes for a cool $12 million CAD. (The place is pretty awesome.) And McCarthy says apartments like this haven’t been staying on the market long. 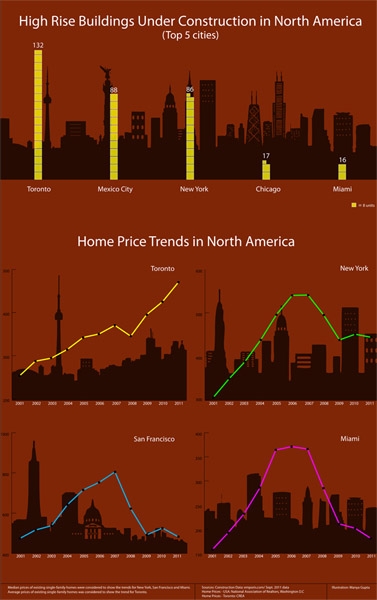 Amy and Chris Poole are looking for something a bit more modest. They’ve been on the home hunt since October and are currently living in a small rental with their two-year-old daughter. Most of their possessions are in storage.

“I mean, this is not our furniture; this is a furnished executive rental,” said Amy. “We want our stuff, we want to unpack our belongings. We want our home, we want to plant our feet.”

Amy and Chris have lost out on four offers and backed out of three others. They say competition at open houses is so intense that they’ve seen things get physical. Chris described a recent open house they attended.

“The listing agent is backed into the corner by the fireplace, and somebody is standing there being quite loud saying, ‘I’m going to work with you, I’m to make sure we get this property, whatever it takes, 120, 130 percent over asking, I’ll do it,’ just to try and intimidate everyone else.”

Amy added, “That was actually the last open house we went to because you just walk through and everyone is sizing each other up, giving each other bad looks.”

Toronto prices are being driven by a perfect mix–record-low interest rates, lack of inventory, and a stable Canadian economy.

Chris says he’s just not willing to pay above a certain amount for a three-bedroom place. He and Amy got uncomfortable when I asked how high they’re willing to go. But Chris said, “It’s over a million, but it’s not too much over.”

That’s a lot of money. And Chris is worried that he’s potentially investing in a bubble, a bubble that could go pop.

Home prices in Toronto have appreciated about 85 percent over the past decade. The market took a short, moderate dip in 2008, but has marched steadily northward since then.

Ask economists and housing experts where they see home prices heading in the next few years... there’s no consensus.

“My forecast is, this year, probably price growth of 2 or 3 percent. 2013, probably a price decline of about 4 percent decline,” said Craig Alexander, chief economist with TD Bank.

The big fear in Toronto, and even more so in high-flying Vancouver, is this: Is Canadian real estate at risk of an American-style collapse?

Phil Soper says no. He says Toronto today is not like the US a few years ago.

“The rate of price appreciation is much less than you see in the United States, or in countries, such as Ireland that had real busts. The Irish situation, for example, from trough to peak, (was) four times as great a price appreciation as we see in Canada today.”

Soper says the rise in home prices in big Canadian cities like Toronto has been slow and steady–Toronto is the tortoise that’s moved ahead of the hare. And now, real estate in greater Toronto is suddenly more expensive than metro San Francisco or the New York area. (It’s hard to say that with absolute certainty though, as Toronto calculates home prices by average, whereas American real estate figures use median. Remember, this is also metro areas, so New York City, for example, is not limited to pricey Manhattan.)

Craig Alexander with TD Bank doesn’t see an American-style meltdown here either. He says the US housing collapse largely happened because of problems within the American banking system.

“At the peak of the US housing bubble about 40 percent of all mortgages being originated were sub-prime loans, in other words, high-risk, high-leveraged loans. Well, in the Canadian context, the mortgages are all income tested, the sub-prime market is probably about 3 percent of the total market. We aren’t seeing a lot of high-risk lending going on.”

I suggested to Alexander that this was shaping up into a far less sexy story than I envisioned.

But David Madani with Capital Economics wasn’t so sure that Canada and Toronto’s housing market is a boring story.

“We use the word bubble. We’re not afraid to use that word.”

Madani sees a lot of common factors between what happened in the US in the 2000’s and Canada today.

Toronto is putting up the most high-rise buildings–that’s anything from 12 to 39 floors–of any city in North America: 132. By way of comparison, the top US city is New York. It’s building 86 high-rise towers.

Amy and Chris Poole, the young couple looking to buy a place, are well aware of all of the construction in Toronto.

“Standing from our balcony there, we can see 14 cranes,” said Chris.

Chris has heard the warnings that Toronto is building too much too fast. But he said he knows the other side of the argument, “where I’m like maybe we are behind what London, New York, what San Francisco is all about. Maybe this is sustainable, maybe this is the way things are going to be for a while. It’s hard to tell.”

Most economists and real estate insiders do agree that real estate values in Toronto will almost certainly be higher in 20 years. So for a young couple looking to invest for the long-term, there’s really no bad time to buy. That is, if there’s something they can afford to buy.

A version of this story also appeared at BBC News.