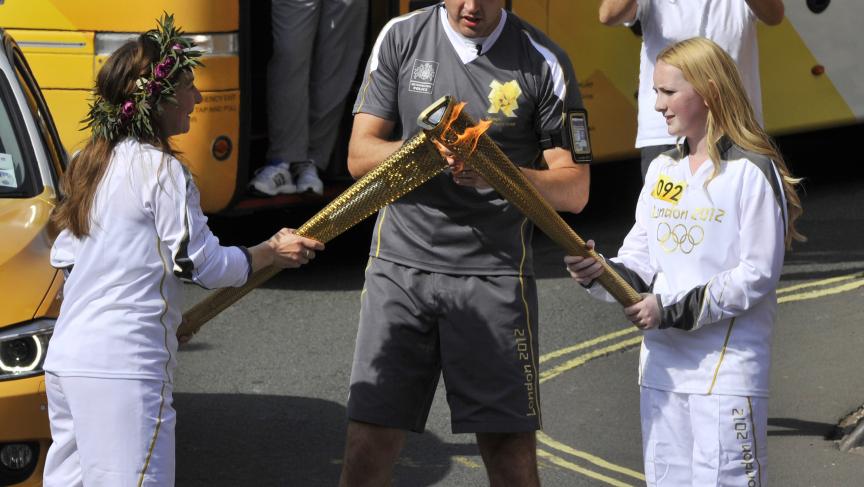 Sarah Milner Simonds transfers the Olympic flame from her torch to the next torch bearer in Dunster, U.K., after running her leg of the Olympic Torch Relay. (Photo by Toby Melville/Reuters.)

The Olympic flame is making its journey around Britain.

For 70 days, 8,000 runners will pass the flame from one torch to another, until it makes its way to London for the start of the 2012 Summer Games.

It’s considered an honor to carry the torch. You have to be nominated, though you also have to shell out a few hundred bucks for the torch and the official relay outfit.

Well, not so much that a few torchbearers aren’t trying to cash in. A quick search of eBay’s UK site shows a number of official torches for sale. One one, the current high bid is more than $55,000.

Jason Murphy, 19, carried the torch, and he’s not happy some of his comrades are selling.

“You are a torchbearer, and I think you should bear that for life,” Murphy said. “You’re there to look after the torch. You’ve had the privilege of passing that flame on. I think it’s very disappointing that people are selling that torch.”

Other torchbearers are a bit more understanding. Richard Burbedge suffers from cystic fibrosis, and underwent a double lung transplant. He personally wouldn’t sell the torch he carried, but he sees why others might.

“If someone is content with the memory from the day, of the fact that they carried the torch, and if they’re happy to not have a torch in the corner of the living room, or their fireplace, or wherever they choose to have it in their home,” he said, “I guess that’s personal preference, to be honest.”

Charity — that’s why Sophia Cowburn put her torch up on eBay. She says she wanted to raise money for a good cause.

“For me, personally, the charity Invictus is very close to my heart. It was set up in memory of my brother, and I wouldn’t have gotten the opportunity to run with the torch had I not set up the charity with my family, and been representing it,” Cowburn said. “So for me to give something back, it’s a massive, massive thing.”

When the bidding closed on Cowburn’s torch, it appeared that the winning bid was more than $180,000. But the bid, it turns out, was a fake.

Others running for charity think it might be better to keep the torch — to take to schools and community centers to raise awareness.

Julia Immonen will carry the torch in the coming days.

“I absolutely won’t be parting company with it. I just think it belittles the spirit of the games,” she said.

One thing’s for sure — with 8,000 runners and 8,000 torches potentially for sale — the chance of making money, for charity or otherwise, may be decreasing sharply in the days ahead.

For its part, the London Olympic organizing committee has said the torches are the personal property of the individual runners, and it’s “their choice to do with them as they wanted.”