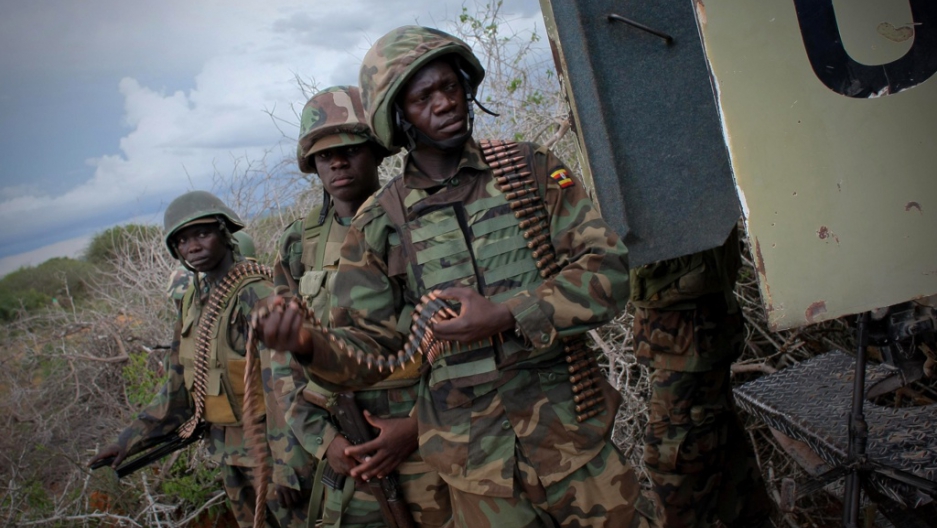 Soldiers in the African Union Mission in Somalia (AMISOM) walk in front of an armored personnel carrier on May 22, 2012, during a joint AMISOM and Somali National Army (SNA) operation to seize and liberate territory from the Al Qaeda-affiliated extremist group Al Shabaab in the Afgoye region west of Mogadishu. AMISOM Force Commander Lt. Gen Andrew Guti announced the beginning of 'Operation Free Shabelle' aimed at bringing security and economic revival to the 400,000 people of the Afgoye Corridor and beyond in the Lower Shabelle region of Somalia, located to the south and west of the country's capital Mogadishu.
Credit: Stuart Price
Share

NAIROBI, Kenya — A long-threatened offensive is underway just outside Mogadishu as African Union and government forces try to evict Al Shabaab, the Al Qaeda-aligned Islamist rebels, from the town of Afgoye 20 miles northwest of the capital. On Wednesday morning the assault entered its second day.

This should be cause for celebration: the pushing further back of extremists who have helped bring misery to millions of Somalis. But the problem is that to reach the Islamist stronghold troops have to pass through something called "the Afgoye corridor," the world's largest concentration of internally displaced people, a sprawling roadside shanty that is home to an estimated 400,000 people.

Announcing its offensive on Tuesday the AU force, known as AMISOM, said the aim was "to help the largest concentration of displaced people in the world."

"Early this morning, the African Union Mission in Somalia (AMISOM) and the Somali National Army (SNA) launched a carefully planned operation to bring security and stability to the people of the Afgoye corridor, west of Mogadishu," said an AMISOM statement.

Related: Why not recognize independent Somaliland?

Wafula Wamunyinyi, a senior AMISOM official added, "The Afgoye corridor holds one of the biggest concentrations of internally displaced people in the world. We are helping them by building security so that they can share in the economic revival of the capital. They will now be able to access humanitarian services and eventually return to their original homes in Mogadishu."

This is premature and disingenuous. As soon as the offensive began fearful residents were reported fleeing their homes as artillery fire flew overhead. There was little information on civilian or military casualties on the first day of fighting although an Al Shabaab spokesman claimed the rebel group had killed 30 soldiers.

On Wednesday morning an AMISOM commander claimed to have found the corpses of 40 Islamist fighters along the road.

AMISOM has brought an unusual peace and security to Mogadishu since ousting Al Shabaab in August, and is only now beginning its push outside the city in a bid to defeat the insurgents who still control large parts of southern and central Somalia. Despite the improvements, suicide attacks and roadside bombs remain a regular and deadly occurrence in the capital.

More from GlobalPost: A symbolic step toward a normal Mogadishu