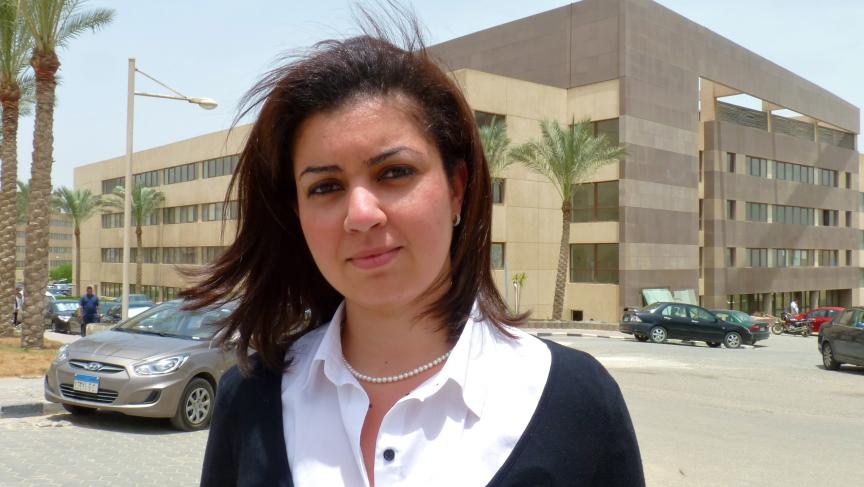 Maram Kaff works in an upscale office park on the outskirts of Cairo.

Editor's Note: This is one part of a series from PRI's The World on global issues of class. For more pieces from this series, visit TheWorld.org.

Egypt's uprising was a diverse one, crossing demographic and socio-economic lines.

But Egypt’s middle class played an especially important part in last year's revolution. Businesspeople, college students, civil servants and professionals all took enormous risks by taking to the streets and demanding an end to the repressive 30 year reign of Hosni Mubarak.

It only took 18 days. And they succeeded.

In the meantime, events in Egypt have been messy. The longer term impact of the revolution for Egyptians — including the diverse swath of people from the middle class — is far from clear. And that's something 26-year-old Maram Kaff says she’s well aware of.

Kaff lived and breathed the revolution. Kaff lives with her mother in one of Cairo's suburbs. The area is called Moqattam. A 30-minute drive from downtown Cairo, it is urban but comfortable. There are rows of apartment buildings, some nicer than others. Retail shops. Restaurants, including a KFC.

The apartment the pair share has the middle class essentials. Wireless internet. Shelves of books in Arabic and English. A nice view from the seventh floor living room window. If weather is clear, you just make out two ancient pyramids in the distance, perhaps even built from ancient stone from Moqattam. Kaff explained she first became involved with political activism after Jan. 25, 2011.

That was the day the demonstrations started.

See pictures of Egypt's Middle Class in action at TheWorld.org.

“I was at work,” Maram said, “doing nothing, just sitting like that on my Blackberry.”

From the office, she followed the progress of that day’s protests on Twitter and Facebook. She was riveted. And two days later, Kaff and her mother decided they would join in.

“We bought masks," she recalled. "We started reading, because people from Tunisia were giving us advice, like, ‘do this, don’t do that. Bring Pepsi with you, it helps with the tear gas.’ We packed one backpack and medical supplies and stuff like that.”

“As soon as the prayers ended, a man stood up and shouted ‘Ash-shaʻb yurīd isqāṭ an-niẓām,’” Kaff said. The people want to bring down the regime. “And the first few times, I couldn’t shout. I couldn’t shout because I was so welled-up with tears. I couldn’t, I wasn’t able to talk.

That first day, Kaff says she and her mom marched toward Tahrir Square. All afternoon, demonstrators clashed with riot police. They saw dozens of people with injuries, including someone they knew who was shot in the face and nearly lost an eye. Eventually, the tear gas got to be too much. And they retreated to a friend’s house.

For the next two weeks, Kaff and her mother went back and forth: from home — to feed the cat and change their clothes — to Tahrir Square, to be part of the protests. When she went back to the office at the bank where she works, Kaff said her co-workers disapproved of what she and the other revolutionaries were trying to do.

“We were three revolutionaries in the whole floor and everyone was looking at us like we had the black plague or something like that,” Kaff said, with a laugh.

They said the revolutionaries would corrupt the country and bring chaos. This was something that Hosni Mubarak had said. Kaff said she would respond to that kind of criticism by telling them when the house is rotten, it has to be demolished before you can start over.

"You have to have chaos [first], to have a really good government," she said.

But powerful forces in Egypt were already pushing back.

Late last summer, Kaff provided a running commentary as she drove through Tahrir Square. The military had just cleared the area of demonstrators by force. There were rows of armed soldiers, riot police and their vehicles. It was a real show of force.

“It feels like someone is violating my home,” she said, without hesitation.

Violating her home, she said, because during the revolution Tahrir felt like the safest place in all of Egypt.

At the time, Kaff was still very much engaged in the revolution. She was going to demonstrations. And like many Egyptians, watching lots of late-night political talk shows on TV. But at the same time, she seemed to be feeling that the spirit of the revolution was coming under threat. And pulling back, ever so slightly.

Iman Ezzeldin, 55, is Kaff's mother. She lectures in drama and criticism at Cairo’s Ain Shams University. She has hair that’s light enough in color for some Egyptians to mistake her as a foreigner. Ezzeldin’s parents are from Upper Egypt and she grew up in the well-off Cairo neighborhood of Heliopolis.

When the revolution began last January, Ezzeldin was not entirely new to protesting. She had taken part in a campaign at the university to oust regime police from campus. But going into the streets to call for regime change was something very different. Much more risky. Ezzeldin knew she could lose her job. But she felt there was no choice. And after those 18 days of protests that brought down Mubarak, Ezzeldin said she and her daughter, along with so many Egyptians, achieved something that can never be taken away.

“I think it’s nothing but dignity. And dignity, it’s worth it,” Ezzeldin said. “I think it was either you live in dignity or you don’t deserve to live.”

She had high hopes for how the revolution might eventually improve her life.

“Salaries, you know, better education, better health, you can’t have it [all] in six months. It’s ridiculous to speak about something like that," she said.

Ezzeldin knows she is part of a political minority in Egypt. She is a Muslim who doesn’t wear a headscarf. She is not particularly religious. She is a divorced and a still-single career woman. Ezzeldin said her whole lifestyle might be threatened by the Islamists who now dominate Egyptian politics.

That lifestyle is unquestionably middle class. But it is important to point out that Egypt’s middle class also includes deeply conservative Muslims. They played their part in last November’s parliamentary elections. Islamist parties won 70 percent of the seats.

Now, plenty of middle class liberals, like Ezzeldin, now feel that the revolution was a mistake, because the Egyptian military and the Islamists are firmly in control, she said. But Ezzeldin says she and like-minded people should not be defeatist.

“We are less in number,” she said this spring. “But maybe we will depend on the loud voice. It’s just like in the parliament. Those liberals who are calling for a civil society and so on, they are the minority but they have a loud voice. So, I’m saying, I will use my loud voice.”

Ezzeldin and her daughter say they have been through highs and lows since the revolution. Speaking about the recent elections, Kaff said in some ways, they were a success. Lots of people participated and there was little violence. But Maram said the new Egyptian parliament is a bit of a joke.

“Sadly, sometimes it’s more of a comedic show than anything,” she said. “But then, I try to remember that this is our first trial at democracy, our first trial at a real parliament that was really elected by the people. I think it’s important for us to stay hopeful and to stay positive and to try to see what good could happen from all of this chaos.”

Back in March, Kaff said she planned to vote in the upcoming presidential election. She was disappointed that the liberal favorite – Mohamed el-Baradei – had decided not to run. So she was not sure who she would vote for yet. The truth is, Kaff said, the middle class in Egypt has a lot to worry about these days and that includes a very shaky economy.

“It’s easy to just say, ‘ah, it’s the revolution.’ Because frankly, it is because of the revolution. But you shouldn’t just look at this year’s bonus or this year’s raise,” Kaff said. “If this is done right, our children will have a better life in [every way].”

Out for dinner and drinks with some of her friends recently, including people she met during the revolution, Kaff joked about needing to get out and have a drink now, before the Islamists make alcohol illegal in Egypt.

She was kidding about the rise of the Islamists, mostly. But politics hardly came up at dinner.

And that was a big change.

Kaff said she rarely goes to demonstrations any more and doesn’t stay up late watching political talk shows on TV. She gets frustrated about where Egypt is headed and whether there will be a place in it for her.

She thinks, maybe at some point, she will just drop everything and leave Egypt. She could move to Canada, where her dad lives. But then, she does not want to give up on the ideals of Tahrir Square: dignity, freedom, opportunity.

So for now, Maram Kaff said she is focused on keeping her expectations realistic.