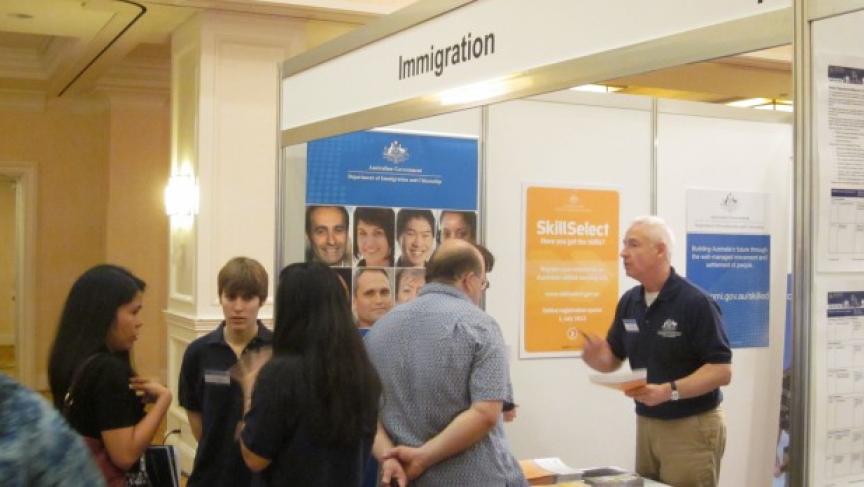 Potential employees talk to a representative of the Australian government at The Aussie Jobs Fair in Houston. (Photo by Jason Margolis.)

Are you an American plumber or electrician looking for work? Or perhaps a civil engineer? Want to possibly double your salary?

Well then, Australia is calling you.

A lot of people in Texas recently heard this call, literally, through radio advertisements and read about them in newspapers and magazines. Several hundred men pre-registered and showed up for the “Aussie Jobs Fair” last weekend in Houston.

Representatives from Australian companies were on hand, as well as government officials. Job applicants were encouraged to apply for multi-year or even permanent visas.

“We’re not that fussy at the moment, I have to say. Our focus is really trying to get the best people for as long as we can get them,” said Peter Speldewinde, an assistant secretary with the Australian department of immigration and citizenship. He runs the country’s migration program.

Speldewinde said Australia badly needs a “labor injection.” That’s largely to support the country’s booming minerals sector. Australia has a lot of valuable stuff in the ground, and a neighbor, China, that’s willing to pay top dollar to get it.

Speldewinde has been staging jobs fairs throughout the world. He said they chose Houston because their data shows about 130,000 people in the area are working in occupations they’re interested in recruiting.

“We know that the skill sets are exactly what Australian employers are looking for. We are hoping that some of the people will look at a time at a time in Australia as an opportunity to enhance their CVs," he said.

And, get a bigger paycheck.

“I’ve heard from multiple people that you can make a ton of money in Australia,” said 27-year-old Chase Thompson, who works on pipelines in Texas. “So I’m here to find that out. Apparently a lot of other people have heard that too.”

I asked Thompson if he could put what he’s heard into a number.

There are similar stories of young men striking it rich swirling around Australia, for example boilermakers earning $150,000 a year. Paul Howes, national secretary of the Australian Workers Union, said that's not quite right.

“Well, at the moment, if they’re a boilermaker earning a $150 grand, they’re underpaid. Because they’re earning about double that," he said.

Howes said these salaries reflect basic supply and demand. He said that the nation is screaming out for carpenters, plumbers, electricians, riggers and scaffolders. And now, Australia has no short-term option but to import its tradespeople.

“In terms of bankers and lawyers, at the moment, they’re a dime and dozen. And I would argue that one boilermaker at the moment is worth 10 lawyers for our economy. And that’s the reality,” he said.

Between Australia’s big paychecks and the fragile American economy, you'd think the hotel conference room in Houston would be filled with desperate job seekers. Not so. I didn’t meet a single person who was out of work, or even struggling to find work.

“I’ve heard the joke, if you can spell the word engineer, you can find a job in Houston these days,” said one civil engineer, who asked not to use his name. His boss listens to public radio, and he doesn’t want him to know he’s out looking for a new job.

The man said he was lured to the jobs fair by the prospect of more money and a little adventure.

“My wife and I have often talked about looking at relocating temporarily, just to see a bit more of the world. But a lot of the places where those opportunities are, are bit too much culture shock for her, going to China, or going to India, or going to the Middle East. It’s just a bit off the deep end from Houston," he added.

But he said, Australia, that would work. Ideally, this man said he’d like to relocate to one of the cosmopolitan east coast cities: namely Sydney, Melbourne, or Brisbane.

Unfortunately, for him at least, that’s not where the jobs are. Engineers and skilled tradespeople are mostly needed in Australia’s hot, dusty, lonely interior.

“It isn’t all rosy and beaches and surfing, and bikinis,” said Sarah Bligh, who was in Houston recruiting for Thiess Contractors.

She wants people to know what they’re signing up for, before they sign up.

“We do need to be realistic to people about the environment they will be living and working in, away all the time during the week and only home on the weekends. It’s not a bad lifestyle, but if you’re not aware of that when you go into it, then I think it wouldn’t be sustainable," Bligh said.

Still, if Americans want these jobs, best to apply soon. The Australian government has ramped up investment in training vocational workers at home. In a few years, those Australians should be ready to help fill the labor shortage.

In the meantime, there is another kind of job applicant Australia wants: trained military personnel. It’s cheaper for the Aussies to hire experienced jet pilots then train them themselves.