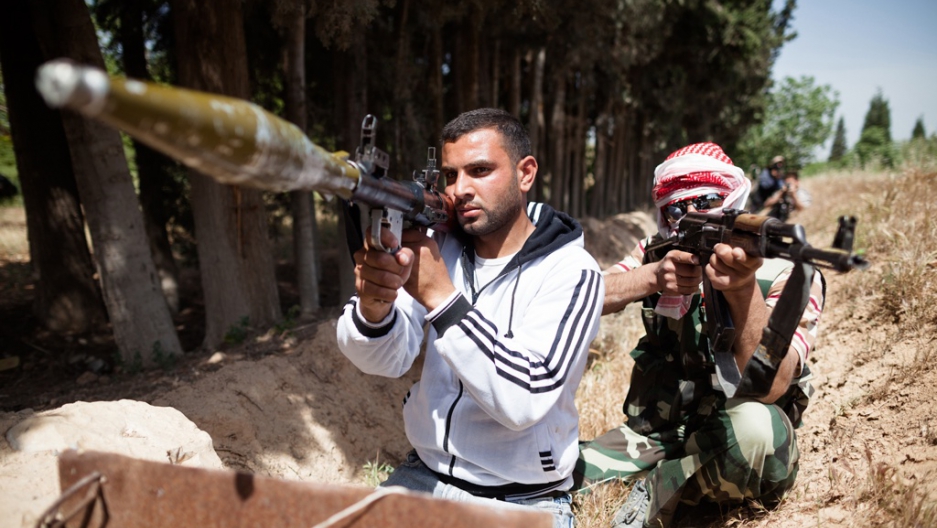 Members of the Free Syrian Army take part in a training session near Homs, Syria on May 10, 2012.
Share

IDLIB PROVINCE, Syria — By the time rebel forces here heard the news over the weekend that a car bomb in Damascus had killed the country’s top intelligence chief, the outside world already knew it wasn’t true.

Nonetheless, in a testament to the chaos, confusion and misinformation that governs the now 14-month old Syrian uprising, the rebel soldiers raised their Kalishinkovs above their heads and shouted Allah Akbar over and over again.

It would have been their biggest victory of the conflict if it had been true. Instead, it was a conflation of three different events that happened in Syria over the weekend.

First, on Saturday, there was a massive car bomb in the eastern city of Deir al-Zour, outside a military compound, that killed at least nine people — none of them high-level government officials.

More from GlobalPost inside Syria: Syrians losing faith in UN

Then, overnight on Saturday, gunfights broke out across Damascus. In the middle of it all, rebel commanders circulated rumors that six senior government officials had been poisoned by the Free Syrian Army, among them Asif Shawkat, the feared intelligence chief and brother-in-law of Syrian President Bashar al-Assad. State television quickly denied the report, as did a senior Free Syrian Army leader based in neighboring Turkey.

It might have been wishful thinking. Despite the presence of UN observers — who are in Syria to determine if a nominal cease-fire is succeeding — violence has only flared around the country.

It’s gotten so bad that the United Nations itself has been targeted. At least two attacks on UN convoys have taken place in the last week, one here in Idlib province and one in Douma, a suburb of Damascus, where a bomb exploded 150 meters from a convoy carrying the UN mission chief himself.

While most have blamed government forces for the attacks on the United Nations, it’s impossible to know for sure. It could just as easily be one of the growing number of foreign jihadist groups operating inside the country. It could also be the Free Syrian Army, which, like most Syrians, is frustrated that the world body has sought a political solution to the conflict that would allow Assad to remain in power.

Everyone has denied involvement in the attacks.

“After one year of revolution we do not want to negotiate with Assad,” said Ahmed Al Sheikh, a rebel leader in Idlib province who commands about 4,000 activists and 2,000 armed soldiers.

“We do not believe in the work of the UN. If the UN wanted to stop Bashir they could. In the beginning they wanted him to remain in power so they did nothing. Now they see that in time the government of Bashir will fall, so they are making some small actions. But in reality they want Bashir to remain.”

The rebel leader admitted that his battalion, like the government, has done little to adhere to the six points outlined by the UN peace plan.

Illustrating that truth, in a warehouse nearby, rebel fighters feverishly prepared bombs. As fertilizer and sugar boiled together in a large pot, a large metal tube was filled with explosives. In the corner, bombs made from old teakettles, barrels and 23mm bullet casings were set with wicks. Others made remote detonators from automatic garage door openers. The homemade explosives ranged in size from handheld devices to something resembling a 44-gallon drum, and another thinner metal casing around 1.5 meters in length.

“The army killed my brother with one of these,” said Humza, a 25-year-old rebel fighter as he held several bullet casings in his hand. “They tried to kill us with these bullets. Now we are turning them into grenades to throw back at them.”

More from GlobalPost inside Syria: Government walls off rebellious neighborhoods

Using such homemade explosives, rebels in Jebel al-Zawiya on Saturday carried out a mission against government soldiers they said was in retaliation for an attack the previous day in which security forces killed a rebel fighter and destroyed several homes.

In the early morning hours, rebel leaders called fighters in from surrounding villages to a remote area along the highway. About 100 fighters arrived by motorbike with many more traveling on the back of trucks.

They gathered and watched as the Syrian soldiers believed to be responsible for the first attack made their way down the road. The rebels detonated a makeshift roadside bomb, killing four government soldiers.

It’s nothing, they say, compared to what the government has done.

They pointed to the recent example of a family that was nearly obliterated by government shelling in the small town of Al Rami, also in Idlib province. After the bombing, a 2-year-old, whose parents and two siblings were killed in the attack, screamed in both fear and pain as a doctor stitched together shrapnel wounds across her face.

The rebels had rushed the girl, whose name was unknown, to a nearby town where she was treated in a secret medical room.

Few Syrians feel safe going to traditional hospitals anymore. Government forces, they say, regularly targeted them, arresting or killing anyone who might be sympathetic to the rebellion.