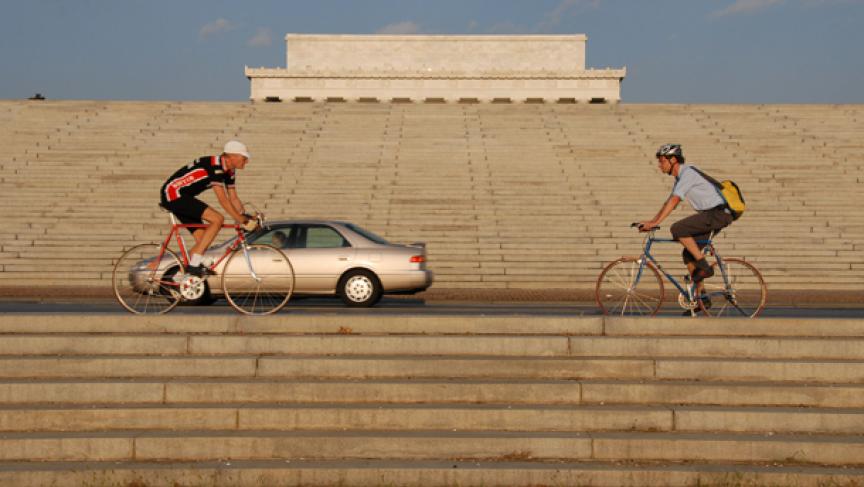 Across the U.S. three quarters of a million people regularly commute to work by bike.

That number is up roughly 40 percent in about a decade.

Davis, Calif., topped a recent list of cycling communities with 22 percent of workers commuting by bike. Boulder, Colo., came in second at 10 percent, Eugene, Ore., at 8.3 percent took third and Cambridge, Mass., rode in at just less than 7 percent.

Federal efforts have contributed to the increase of riders taking to bike paths.

Back in 2005, the federal Department of Transportation gave four places in the United States 25 million dollars each to improve their bike ridership and get people walking. Money for the "Non-Motorized Transportation Pilot Program" went to Columbia, Mo., Marin County, Calif., Minneapolis, and Sheboygan County, Wisc.

Marianne Fowler, the senior Vice President for Federal Relations at the Rails to Trails Conservancy, said the $100 million was money well spent.

"The purpose of this project was to see if we gave four communities sufficient funds, would it accomplish a mode shift and a change in people’s behavior from driving cars to walking and biking?" Fowler said. "And, of course, the answer is, resoundingly, yes it did."

In April, the transportation program reported their findings to Congress. Fowler said the pilot program was extremely successful in encouraging Americans to use transportation alternatives.

"In the three-year period, measured from 2007 to 2010, the four communities in aggregate showed a 22 percent increase in walking and a 49 percent increase in biking," Fowler said. "What this means is trips that would have otherwise have been taken by a car were converted and taken instead by walking or biking. And what those trips mounted up to over the three years was about 32 million vehicle miles averted."

The Sierra Club and the League of American Bicyclers released a report on May 18, National Bike to Work Day, highlighting the substantial financial savings of using a bike for daily transportation.

According to the report, the average annual operating cost of a bicycle is $308, compared to $8,220 for the average car. If American drivers were to make just one four-mile round trip each week with a bicycle instead of a car, Americans would save nearly 2 billion gallons of gas. At $4 per gallon, total savings would be $7.3 billion a year.

Fowler said the economic benefits of riding a bike are so profound because, after housing, transportation is the biggest expense for American families.

But despite these estimated savings, infrastructure to support biking and walking is frequently denounced as frivolous.

"Years ago, Bobby Kennedy had what was called the three percent solution," Fowler said. "Three percent of the transportation bill should go into investments in biking and walking. And right now, we’re sitting at about 1.7 percent. I would be happy in the next bill if we had a three percent investment in walking and biking."

One concern keeping some commuters in their cars is the high rate of bicycle accidents. But Fowler said the data generated in the pilot communities showed the rate of fatal accidents did not increase as more bikers took to the roads.

"Because of the great community awareness that was created, the driving community was actually looking out for bicyclists and pedestrians," Fowler said. "And obviously the more you have, the more accustomed you are to seeing people walking and biking, and so it had an overall safety impact."

Fowler is confident in the benefits of cycling. She thinks investments in bike paths and lanes offer significant returns.

"The savings aren’t just for one year or just for the three years that we’ve measured so far — they’re cumulative and they’re ongoing," Fowler said. "We’ve planted the seeds, the infrastructure has blossomed and it's there to be used into the future."