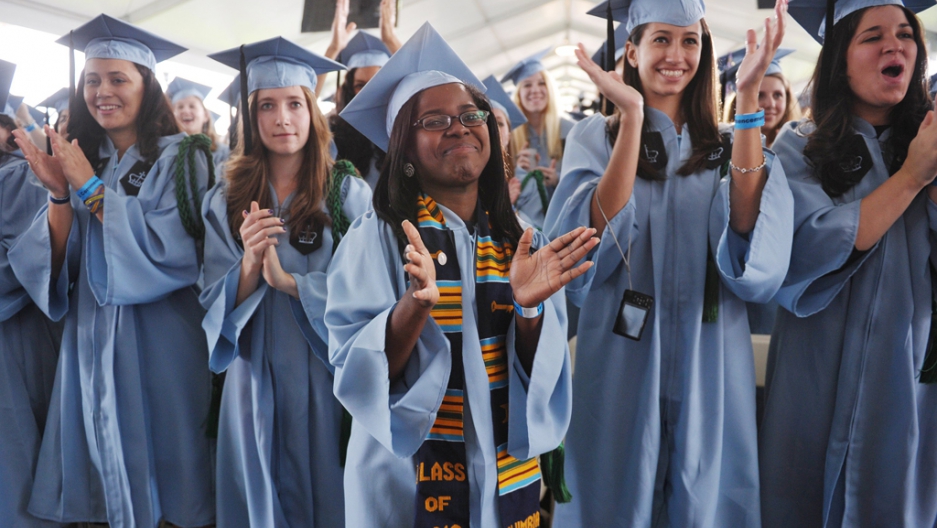 Graduating students applaud as US President Barack Obama speaks during commencement ceremonies at Barnard College May 14, 2012 in New York City. On May 22, 2012, a group of bipartisan senators proposed easing visa limits for highly skilled foreign students and immigrant entrepreneurs who could stay and create jobs in America.
Credit: MANDEL NGAN
Share

A bipartisan group of senators proposed legislation on Tuesday that would ease visa limits on highly skilled immigrants and foreign students, according to The New York Times.

Sen. Mark Warner of Virginia and Chris Coons of Delaware, both Democrats, joined their Republican colleagues, Sen. Marco Rubio of Florida and Jerry Moran of Kansas, to introduce the legislation which would be a break from both parties.

At a news conference, the senators said the ailing economy called for both parties to move beyond their positions of traditional positions on immigration, reported The Times.

The bill would let foreign students who hold post-graduate American degrees in engineering, math and science to remain in the country after their studies. It would also let immigrant entrepreneurs remain so they could start businesses and create jobs, reported The Wall Street Journal.

The Hill said the bill, named Startup Act 2.0, would also eliminate limits on how many work-based visas can be issued to workers from a certain country.

The Journal said the bill would also create a tax credit to encourage start ups to invest in research and development, and allow investors in start ups to avoid capital gains tax if they held their investments for at least five years.

The legislation could potentially make immigration an issue in the presidential campaign, as Democrats in recent years have pushed the DREAM Act, which would create a path to citizenship for illegal immigrants who came to the country while young and went to higher education or the military.

Rubio, frequently mentioned as a possible running mate for Republican presidential candidate Mitt Romney, has said he is working on his own version of the DREAM Act.

Moran said, "I would guess that 80 percent of my colleagues in Congress would agree with the visa provisions in this legislation," according to The Hill. He added, "And what I would encourage is that we not take the attitude or approach that unless we do everything, we can’t do anything."