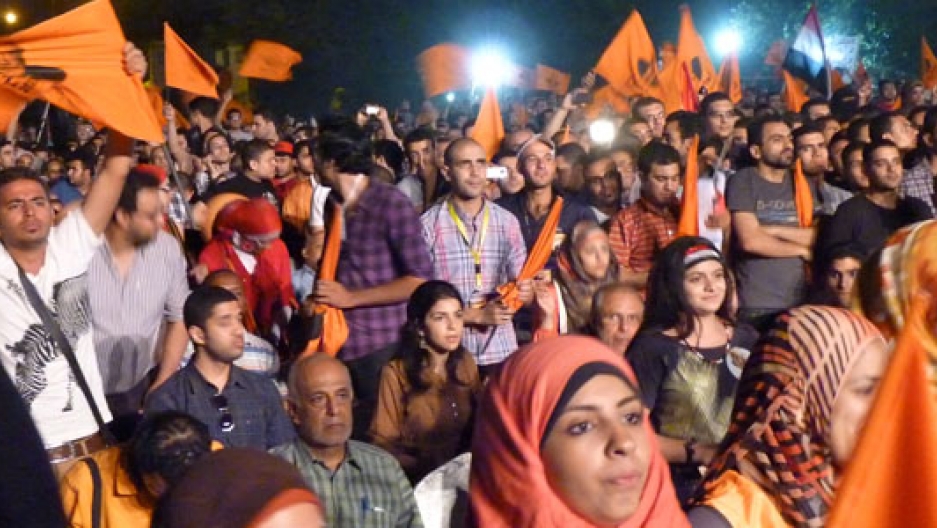 Egyptians attend a politica rally in Cairo ahead of this week's elections. (Photo by Matthew Bell.)

Tens of millions of Egyptians are set to take part in what’s expected to be the country’s first competitive presidential election.

Two of the leading contenders are Islamists. One has the backing of the powerful Muslim Brotherhood. The other is a former Brotherhood member. Both have strong Islamic credentials.

They’re seeking to portray themselves as the best choice for Egyptians who supported the revolution.

Drive northeast from Cairo for about two hours and the landscape changes from a vast lifeless desert into lush greenery. The city of Ismailia sits on the Suez Canal. It’s famous for seafood restaurants and mangoes. It’s also the place where the Muslim Brotherhood was founded back in 1928.

On the outskirts of Ismailia, down a dusty road, a little mosque hosts an influential Muslim cleric. Sheik Sayyid Ahmed Ali is a leader with the Salafi Call, an Islamic fundamentalist group whose ideological allies took some 25 percent of the votes in last year’s parliamentary elections. Ali is here to talk about one thing: the upcoming presidential race.

Judging from their clothes and their beards, the men sitting in rows on the crimson carpet here are poor and deeply religious, which describes a huge swath of Egypt’s population of 80 million people. The sheikh tells them it is their duty before Allah to vote this week.

“After being persecuted and imprisoned by the previous government,” he said, “the Egyptian revolution is our chance to revive Islam. We need a president to prepare Egypt for Islamic sharia law. We need a president who knows that Egypt is the greatest Islamic country in the world.”

It’s a straightforward, ultra-conservative message. But Ali, it turns out, supports Abdel Moneim Aboul Fotouh — the candidate who presents himself as an Islamist moderate.

In Ismailia’s city center, Aboul Fotouh’s supporters are having a small rally. Hamdi Mohamed Hassan is there, sporting a business suit and a Salafi-style beard. He’s with the political branch of Al-Gama’a Al-Islamiyya. In the 1990s, the group waged a violent campaign to impose Islamic rule on Egypt. It was declared a terrorist group by the United States. Many of the leaders were imprisoned. They renounced violence almost ten years ago. Now, just like the sheikh back in the mosque, Hassan is engaged in politics and he’s throwing his support behind Abul Fotouh as well. Abul Fotouh us a physician by training and a former Muslim Brotherhood leader.

“The real Islamic thinking,” Hassan said, “is to gather people around you. Islam has no racism and no exclusion. So we don’t need to exclude anyone. I believe Dr. Abdel Moneim Aboul Fotouh, that he’s belonging to this school of thought, to gather all people without excluding anyone and also, without making any compromises.”

On Friday night in Cairo, at least 15,000 gathered to see 60 year-old Aboul Fotouh. The rally was held in an upscale part of the city called Zamalek, at the Al-Gizeera Youth Club. Aboul Fotouh’s campaign aims to portray the candidate as the best choice for all those Egyptians who support the revolution, whether they’re conservative Muslims or not. One analyst describes him as the “Rorschach test of Egyptian politics.” The crowd was diverse. On stage with Aboul Fotouh were some well-known Islamist leaders, along with some Christians, women with no headscarves, socialists and secular liberals as well.

One of the leaders in last year’s uprising against Hosni Mubarak, Wael Ghonim of Google gave a full-throated endorsement of Abol Fotouh as the best hope for keeping the revolution alive.

Abol Fotouh’s supporters see him as a true independent. He spent many years with the Muslim Brotherhood. But he was forced out last year. At the time, the organization was against putting up a presidential candidate. Abol Fotouh decided to make a run on his own. For some conservative Muslims, though, that independence is also seen as a liability.

The Muslim Brotherhood’s presidential candidate, Mohamed Morsy led another mass rally of thousands last night in downtown Cairo. Speaking with people at the rally, it’s clear that their focus is more on the Brotherhood’s program and it’s grand plan than on Morsy himself. In fact, the engineering professor was the group’s second choice to run for president. The Brotherhood’s first choice was disqualified by the electoral commission. But that is beside the point for one voter who tells me his name is Ahmad.

“Islamic Sharia law, of course, is the most important issue,” he said. “We are Muslims. Allah provided us with Sharia as our constitution. And this is how we should be ruled.”

This idea that "Islam is the solution" to most of Egypt’s problems is definitely part of Morsy’s message. That might make him the preferred choice for more hardline Islamists. But it could also turn some voters off.

Last Fall, the Brotherhood’s Freedom and Justice Party won an astonishing 40 percent of the seats in the new parliament. Since then, the performance of the Islamist-dominated parliament has been a real letdown for many Egyptians. Polls suggest the Muslim Brotherhood’s support has fallen. So it’s an open question whether voters are willing to give the Muslim Brotherhood, which already dominates the legislature, the power of the presidency as well.

Elections are slated for Wednesday and Thursday with a run-off possible in June, depending on results.