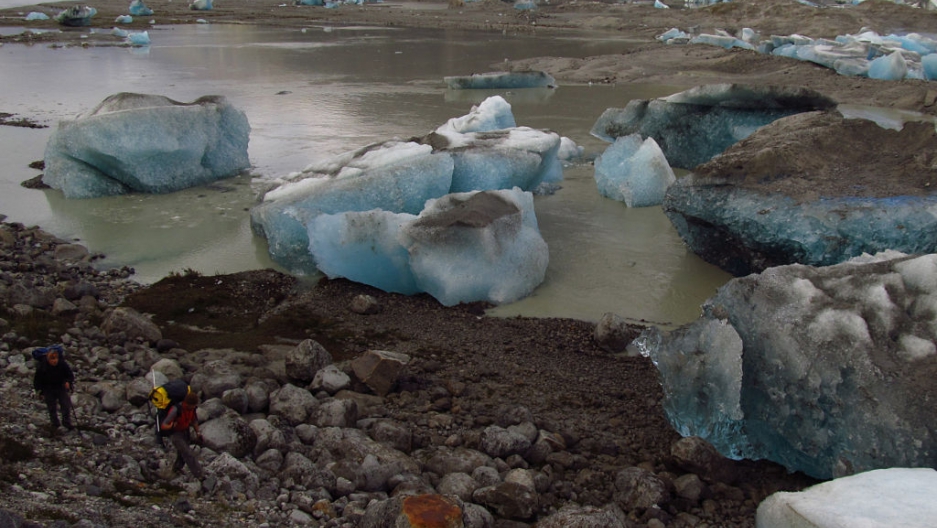 Two people walk next to ice blocks in the lake Cachet II in Aysen, Chilean Patagonia, 1700 Kms south of Santiago on April 6, 2012. Shortly before midnight of March 31, 2012 the lake with his 200 million liters of water began empty for second time this year. The lake disappeared completely due to rising temperatures driven by climate change, according to experts.
Credit: STR
Share

Lake Cachet II in Chile's southern Patagonia region was once an enormous, two-square-mile glacial lake. But now, the lake is empty. In a period in March that lasted less than 24 hours, the lake completely vanished, the Agence France Presse reported today.

This is actually the 11th time that the lake has drained since 2008, and scientists wonder if global warming is to blame. The lake's water comes from a glacier, but rising temperatures have made the glacier weaker. As a result, Lake Cachet II's 200 million cubic liters of water gushed out into another river, emptying Lake Cachet II's lake bed, the AFP said.

The United Nations Environment Programme has also said that glaciers on Argentine and Chilean Patagonia are “losing mass faster and for longer than glaciers in other parts of the world," Newsweek Magazine reported last year.

The most famous example of this occurred in 2007, when a five-acre, 100-feet-deep glacial lake in Chile's southern Andes region also completely vanished.

"The lake had simply disappeared," Juan Jose Romero, head of Chile's National Forest Service, told the Associated Press at the time. "No one knows what happened."