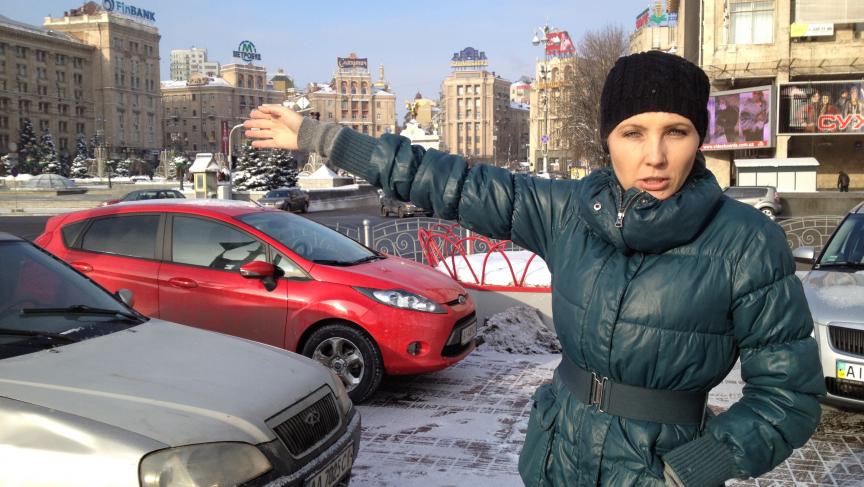 Like her country, Olena Koshil has been running non-stop for 20 years. At only 32, she manages a TV production company in Kiev. She speaks several languages and has been working in national TV since she was a teenager. In 2004, like many other urban professionals, she became involved in the political upheavals known as the Orange Revolution.

In November of that year, on Kiev’s Independence Square, Olena felt her life change for good. She was among thousands who crowded into the square to protest results of the presidential election.

“At one moment everybody understood that it’s the moment you can decide, and you have to take part,” Olena recalls. “And it was a very new feeling for me, for example, and I think for many people.”

That night, Olena and her husband Denis Samygin made up flyers and drove to the outer reaches of Kiev to paste them on bus shelters.

“Don’t go to work, just go to Maidan, because tomorrow, it’s our last chance,” Olena wrote on the flyers.

Olena and the other protesters believed the vote had been rigged in favor of a candidate from the industrialized Eastern part of Ukraine, Victor Yanukovych. The campaign had been incredibly bitter, and opposition candidate Victor Yuschenko had even been poisoned.

After two weeks of protests, the Ukrainian government allowed new elections to take place and that time, Yuschenko won.

Olena was thrilled—and for about a year, she says, the country seemed transformed. But slowly, she watched the energy of the Orange Revolution fade. Three years ago, when new elections came around, Ukrainians elected the candidate who’d been defeated in the Orange Revolution, Victor Yanukovych.

The new government has put some Orange Revolution leaders in jail. That’s upset the European Union, and upset the middle class Ukrainians, who want more links with Western Europe.  At this point, Olena is both frustrated and defiant.

But meanwhile, Olena has a lot to think about in her own life. She has two children. And a few years ago, she and Denis got a mortgage to buy in an apartment in a 100-year-old building in central Kiev. They renovated it to take out all of the Soviet-era touches. The closet-sized bathroom became…a closet. And the old kitchen is now the bathroom.

“It’s very great to have bath-ROOM,” Olena laughs. “Because ‘bathroom’—you have to have to have a room. To have a bathroom with a window, and so big, it’s like extraordinary.”

Olena says she and her circle of friends define “middle class” as having enough money to own an apartment and a car, and to travel abroad. She and her family live comfortably, but for Denis, this sense of comfort pretty much ends at their front door.

“What’s lacking for the middle class is any kind of social protection, as far as health care is concerned, or the legal system,” Denis says. What’s more, he says government bureaucracy makes it hard to run a business. He should know—he’s co-owner of a public relations firm. He says things are getting more corrupt again under the Yanukovych regime.

“More people are talking about how it's pointless to live here,” Denis says, “and it would be better to leave.” But he and Olena have no plans to go. They care too deeply about Ukraine.  After their children were born, Denis even switched from his native Russian to speaking Ukrainian all the time. Denis says this means his wife will usually get the upper hand when they argue, since she’s a native Ukrainian speaker.

Olena grew up in a provincial city southeast of Kiev. Her mother was a pediatrician, and her father an engineer. They were solidly middle class. Except this was the Soviet Union, so the middle class didn’t really exist. Olena remembers going to Soviet military parades with her family.

“From somewhere my father brought these balloons and I [thought] it was a miracle, these balloons. I liked it very much,” Olena recalls.

Balloons felt like a miracle because her parents didn’t have much. In 1991, when Ukraine became a new country, they suddenly had even less.

“My parents were not paid on their work. It was very difficult. There was no money, like there’s no money at all,” she says.

Still, Olena’s parents insisted that she to go to a good school in Kiev. Olena paid her rent in the city by bringing food from the countryside on a two-hour train ride. It eventually paid off: Olena got into university in Kiev and started working as a journalist. Within ten years, she went from hauling plucked chickens on the train to being a national TV editor.

Olena needed determination and energy to succeed in the face of historic change. But now things have started to slow down—and Olena’s not sure she likes that. She describes her current state, half-humorously, as a kind of stagnation, an “existential crisis.”

“Because everything has happened already,” Olena says.

Exciting as her life has been, Olena doesn’t want her children to feel the same pressures she did. Her daughter Sonja, who’s six, has a mobile phone, and 3-year-old Marco knows how to navigate a laptop computer. After Sonja asked for a dog for three years, Olena got her one.

And in the children’s bedroom, the floor is covered in balloons.