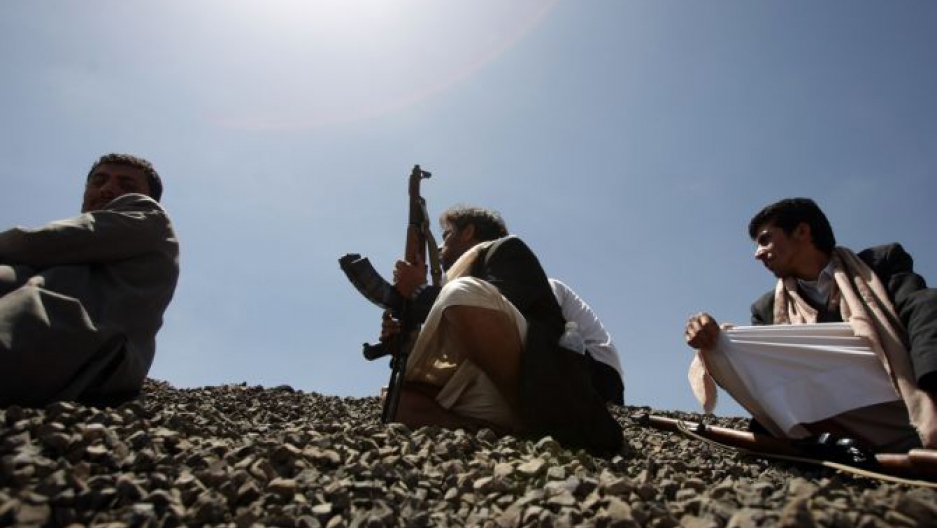 Yemeni armed tribesmen gather for a tribal meeting on the outskirts of Sanaa to discuss local conflicts on May 17, 2012.
Share

SANAA, Yemen — When a young suicide bomber, disguised in combat gear, blew himself up at a military parade rehearsal here on Monday, he killed at least 90 Yemeni soldiers.

He also blew a hole in US counter-terrorism strategy.

The United States has for years partnered with the Yemeni government in order to contain the local incarnation of Al Qaeda. But in the chaos sowed by a year of popular protests, which eventually led to the resignation of Yemen’s longtime strongman Ali Abdullah Saleh, Al Qaeda in the Arabian Peninsula has only gained ground.

Al Qaeda has wrested control of several southern Yemeni cities in the last year, governing a population increasingly sympathetic with the militants. A stepped up US drone campaign has, despite killing several high-profile Al Qaeda leaders, done little to stem the tide.

More from GlobalPost in Yemen: Where Al Qaeda rules

Regardless, in the day following the massive bombing, both the United States and Yemen reaffirmed their commitment to the strategy.

Newly-minted President Abd Rabu Mansour Hadi pledged at a recent meeting with US Counterterrorism Chief John Brennan that “the move towards the pursuit of terrorists is irreversible.”

And hours after the suicide bomb in Sanaa, Brennan phoned Hadi. They “reaffirmed the unshakable partnership between Yemen and the United States, and President Hadi pledged not to let terrorist acts interfere with Yemen’s peaceful political transition,” according to a White House press release.

However, the failure of Yemen’s military to protect its own ranks at the parade rehearsal may be a harbinger of challenges Hadi and Brennan will face in preparing a young, divided military for battle against a far more disciplined enemy that has proved itself capable of blending unnoticed into virtually any environment.

Amidst this uncertainty, Hadi is sending mixed signals. In a bold response to the suicide attack, the president fired four senior commanders and close allies Saleh, his predecessor. Later in the day, however, the president opted out of a highly anticipated national address at which he was expected to reassure a terrorized populace.

In an attempt to reassure the country's online audience, Yemen’s spokesperson in Washington tweeted, “No retreat, no backing down; the military parade will be held tomorrow in Sanaa, Yemen.”

More from GlobalPost: The logic behind The Drone Wars

On Monday, eyewitnesses watched the young bomber sneak through an amusement park on the western side of Saba’een Square, where the drills were taking place. He then scaled a wall and disappeared into a crowd of saluting cadets, who had just finished practicing marches they would perform Tuesday to commemorate Yemen’s 22nd anniversary of unification.

The blast sent thousands of soldiers fleeing for safety. Severed limbs, chunks of flesh and deserted rifles littered the asphalt tarmac in concentric circles around the charred bodies. One witness said he saw blood spattered on the grand stands, separated by a 10-lane highway from the amusement park.

Thousands of Yemenis were expected to fill those bleachers on Tuesday to celebrate their first National Unity Day since Saleh resigned. Saleh engineered the unification in 1990 and violently enforced it four years later in a short but bloody civil war.

While Yemen is accustomed to violent clashes between tribes, the government, separatists and militants, the bombing on Monday took everyone by surprise. The streets around Saba’een were filled with chaos after the bombing. Uniformed soldiers waved and shouted hysterically at pedestrians to turn back. Whining ambulances and honking taxis shuttled the dead and dying to hospitals, where staff said they were overwhelmed and underprepared for the atrocity.

Doctor Mohsin al-Dhahari at Sanaa’s police hospital said most of the patients were teenage boys. “We have dozens paralyzed from head to toe. We expect the death toll to rise,” he said.

Doctors without Borders reported it had been facing similar challenges in the south, where Yemeni ground and air forces have been storming Al Qaeda strongholds for the past two weeks.

“Teams have received increasing numbers of patients [who] all suffer bomb blast injuries,” according to a statement the group released on Monday.

Yemen’s defense minister, who arrived to Saba’een minutes after the explosion, was the target of the bomb, Al Qaeda said in statement. The group warned of further “retaliation” if the military continued attacking its so-called “Islamic Emirates” in the south.

The suicide bomb was the first pedestrian attack in Sanaa since April 2010, when a student in school uniform detonated his explosives belt near the armored car of Britain’s former ambassador to Yemen. The year before, bombers targeted a convoy of South Korean officials.

Yemeni Political Analyst Nasser Arabyee has been warning of such an attack in one of Yemen’s main urban centers.

“A car bomb was found in Sanaa last week,” he said, “right after [Al Qaeda leader Ayman] Zawahiri urged his Yemeni affiliate to increase the fight against Hadi and the US.”

“This is definitely connected to the American assassination attempt yesterday,” he added, referring to the two US military trainers who were shot in the resort town of Hodayda along the Red Sea.

Al Qaeda claimed responsibility for both attacks on its official Facebook page, citing retaliation against “crimes” committed by a resurgent Yemeni military since late April in south Yemen.

An emboldened CIA drone program launched last June has provided most of the firepower used against the Islamist militants. Indeed, in the 11 months since US President Barack Obama authorized the covert drone program, American forces have conducted some two dozen air strikes on Yemeni soil, which represents a fourfold increase over those carried out in the nine preceding years combined.