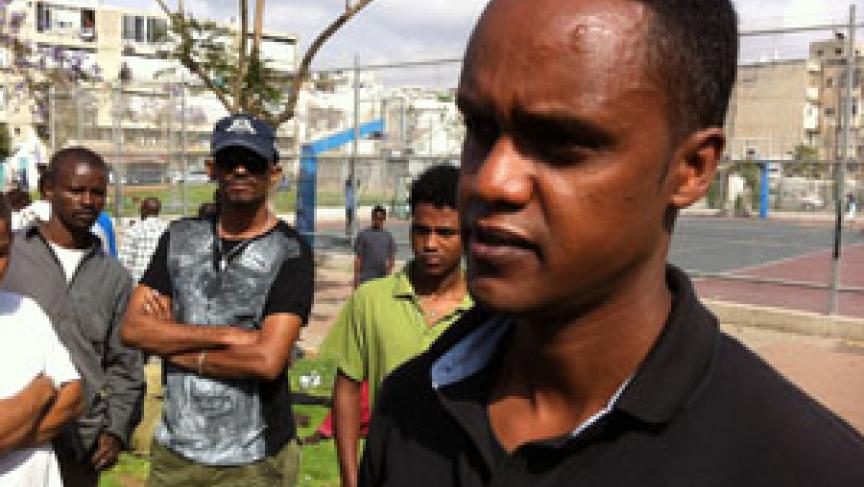 Tel Aviv is known for its beautiful beaches, beautiful people and care-free spirit. But the Hatikva neighborhood, on the city’s south side, has a very different reputation.

About 50,000 people from different African countries have come north from Egypt and across the Sinai desert into Israel, with half that number arriving in just the last couple of years. This neighborhood of south Tel Aviv is one of the places they’ve settled in large numbers. And some of the locals are not very happy about it.

A man who gave his name as Yeheskin sells shoes at the outdoor market. He said he was born in this neighborhood. He is a patriotic Jewish Israeli. And these Africans have ruined the place, he said. They are criminals, drinkers and freeloaders.

The solution, he said, is to put all the Africans on trucks and drive them back to the border with Egypt.

The idea is not too different from what Israel’s Interior Minister said this week. After four Africans were arrested in connection with the rape of a Jewish woman in Tel Aviv, the minister told Israel’s Army Radio that it’s time to get tough. He said most of the Africans living in the country are not legitimate refugees. They are criminals, he said — “infiltrators”. They should be detained and then given grants to help them leave the country. Other politicians have a more lenient view, but the problem isn’t going away.

The scene at Levinski Park in south Tel Aviv is a vivid example of the scope of the dilemma. Most African foreigners who enter Israel illegally get detained as soon as they cross the border from the Sinai. When they’re released, they are driven to the bus station near here and dropped off. Hundreds of them end up making the park their home. People sleep on blankets and live on food donations. They try to get whatever temporary work they can. But most African migrants are not given work permits.

Tedros Desta, 33, is one of the lucky ones. He left the political turmoil in Eritrea and came to Israel almost five years ago. He said he can’t go back home. It wouldn’t be safe for him. He managed to save up enough money to open a small clothing shop. Though he still can’t get a business license. Life here is better than it was in Eritrea, he said. But it’s not a good life.

“We came here to ask (to be) a refugee. We asked (for) asylum,” he said. “But (it's been) almost five years, we’re without any interview, without any status changing here. In 2008, they promised us ... an interview (to) decide whether we are a refugee or not, for every individual. But they did nothing about their promise.”

Another man from Eritrea – which is where most African migrants come from – said he didn’t come to make a life in Israel. Haile, 32, said Africans are coming to Israel for protection from a repressive regime back home. But they’re not getting it. And they’re stuck.

“We are less fortunate people. We need help. We know that,” Haile said. “But no one is now on our side. We are always crying. So, why don’t make dialogue with developed countries like in the West and in Europe, how they can resettle refugees from Israel to developed countries. These refugees are getting mad. Or, they are developing mental insanity from time to time. Because everybody become fed up. They are pessimists. They don’t have any hope at all.”

A root cause of that legal limbo is the fact that Israel has never developed a clear immigration policy for non-Jews. In the meantime, prevention is the priority. The government is building a new fence along the border with Egypt. In addition, a huge new detention facility is being constructed. But what to do about the tens of thousands of African migrants already living in Israel has become a contentious political issue.

Yesterday, a non-profit group that assists migrants said it received threatening phone calls. In recent weeks, a kindergarten for African children in Tel Aviv was gutted by an arson attack. There was at least one other attempted fire bomb attack at an apartment building where Africans live. Still, it’s not hard to find Israelis, like Yehuda Elimelech, who are sympathetic to the plight of the migrants. Elimelech manages a restaurant in south Tel Aviv.

“Here, those people, they’re people who want to live, to take care fo themselves and leave politics on the side. And you have to think,” Elimelech said, "what are you going to do with this problem.”

Of all people, Elimelech said, the Jews who’ve been through so much persecution, should be thinking about how to help these people in need.