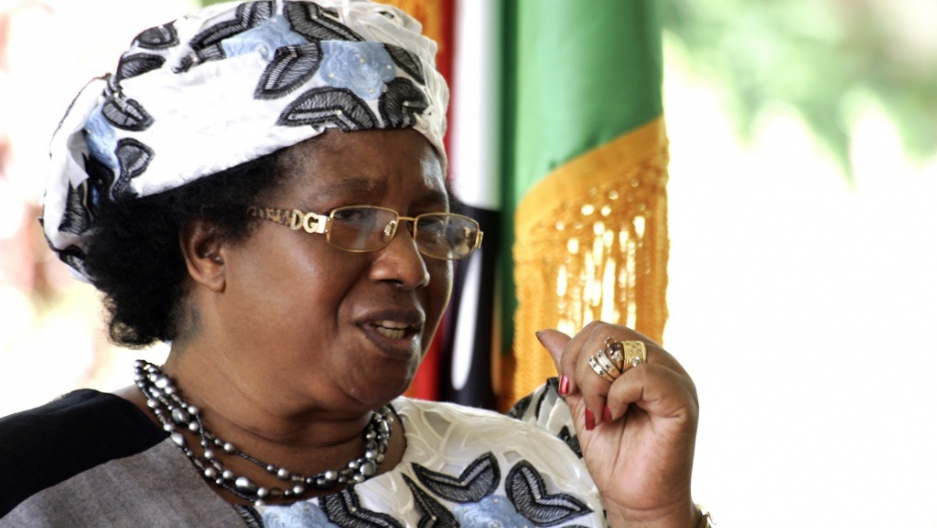 Malawi's new President Joyce Banda gives a press conference on April 10, 2012 in Lilongwe. Banda said she was pinning her hopes on donors to re-open aid taps after she started talking to them on possible resumption of aid frozen over governance and macroeconomic concerns. Banda was sworn in on April 7, 2012 just hours after officials confirmed the death of president Bingu wa Mutharika whose rule had sparked alarms over democratic freedoms and economic mismanagement.
Credit: Amos Gumulira
Share

She announced that she will work to overturn Malawi’s law which bans homosexual acts, reported the BBC.

Banda said she wants to repeal "bad laws" when speaking at her first “State of the Nation” address to parliament on Friday, May 18. She has the support of a majority of parliament, so she may well succeed in undoing the legislation that outlaws homosexuality.

Banda, 62, is shaping up to be one of Africa’s most interesting leaders. She became president on April 7 after the death of President Bingu wa Mutharika.
Banda was Mutharika’s running mate in the 2009 elections, but then fell out with him. Nevertheless when he died of a heart attack she was sworn in as Malawi’s new head of state. Banda is Africa’s second female president, after Liberia’s Ellen Johnson Sirleaf, who recently won reelection to a second term.

Banda quickly announced that she would be doing things differently from Mutharika, who had alienated donor nations, especially Britain. Banda reversed several of his policies. She devalued the currency, the kwacha, by 30 percent in a bid to get donor funding restored, reported AP. Many donors cut aid under Mutharika, accusing him of economic mismanagement and political repression.

She said she feared the "economic implications" if Bashir visited the country in defiance of an arrest warrant issued by the International Criminal Court on war crimes charges over the conflict in Darfur.

Malawi’s relations with donors have already improved thanks to Banda's actions and the British government, which had been extremely critical of Mutharika, is now urging other donors to restore funding as soon as possible.

Malawi is one of the poorest countries in the world, with up to 60 percent of its 15.4 million people living below the poverty line, according to the UN. Foreign aid used to make up a large proportion of the national budget.

Related: Why are so many Africans hungry?

If Banda succeeds in decriminalizing homosexuality, Malawi will join South Africa as the two countries in Africa where gay sex is not illegal. South Africa’s 1996 constitution prohibits discrimination against gays and allows same-sex marriage. However many ordinary South Africans remain homophobic and there have been several murders of gays in recent years.

Many Malawians and Malawian churches also disapprove of homosexuality. In 2010 two Malawian men were sentenced to 14 years in prison after they announced they would get married. Eventually they were pardoned by Mutharika on "humanitarian grounds only" but he said they had "committed a crime against our culture, against our religion, and against our laws," according to the BBC.

Other African countries are strongly against gay rights. Uganda has a bill before its parliament that calls for harsh penalties for homosexuality. At first the bill called for the death penalty, but the bill has since been changed to call for a sentence of life imprisonment.

In parts of Nigeria and Sudan that use Shariah law, homosexuality is punishable by death, reported the Irish Times. In Liberia, Johnson Sirleaf said earlier this year she would keep a law that makes voluntary sodomy illegal.

But not all African leaders are anti-gay.

The two ex-presidents went to Lilongwe, Malawi’s capital, in June 2011 as part of their campaign to reduce H.I.V. transmission.

“We can preach about behavioral change, but as long as we confine gays and lesbians into dark corners because of our inflexibility to accommodate them, the battle on H.I.V. and AIDS can never be won,” Mogae said.