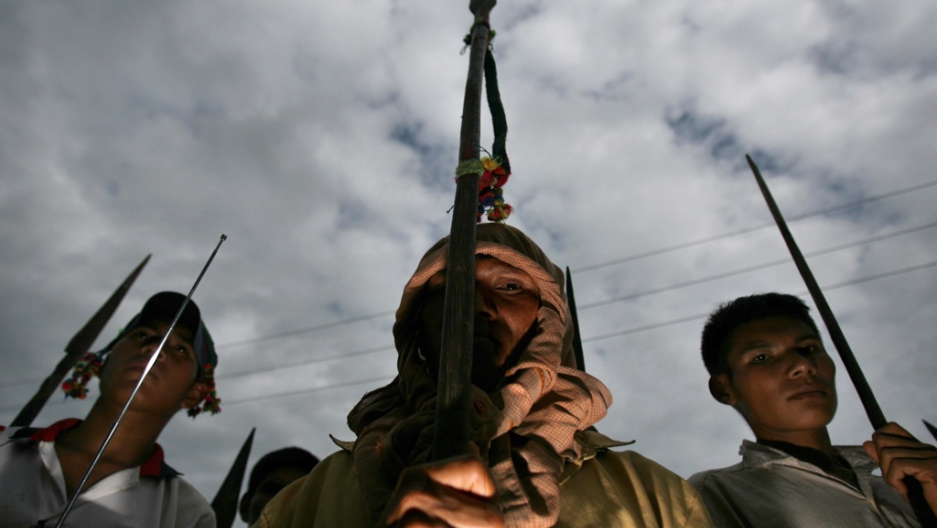 Road block: Peru's indigenous groups protested in 2009 against former President Alan Garcia's plan to ease restrictions on industries including mining and wood harvesting in the Amazon. That ended in the Andean country's bloodiest conflict in nearly two decades with 35 dead from clashes between protesters and security forces. A new plan to cut a big road through the Amazon likely will be met by a hard fight as well should it pass Congress.
Credit: ERNESTO BENAVIDES
Share

LIMA, Peru — The Peruvian congress is set to debate putting a road through a remote, protected part of the Amazon that is home to some of the last fully isolated indigenous tribes anywhere in the world.

The highly controversial freeway would cut through an indigenous reserve and a national park in the jungle departments of Ucayali and Madre de Dios, on Peru’s southern border with Brazil. It would link the towns of Puerto Esperanza and Inapari.

Environmental and indigenous groups fiercely oppose the road, fearing it will pave the way for illegal loggers, poachers and land squatters to devastate both the rainforest and the native communities who live there.

“It is not illegal to do this in Peru, but it completely contradicts the laws protecting uncontacted tribes, as well as environmental laws,” Rebecca Spooner, of Survival International, a British group that supports tribal peoples around the world, told GlobalPost.

“Officially declaring the road 'a national necessity' is basically exploiting a legal loophole to override the normal protections in place in national parks and reserves, which state that roads should not be built.”

The draft bill appears to have a real chance of becoming law. It has been signed by 30 of the 130 members of Peru’s single-chamber congress. They include Rolando Reategui, the spokesman of the right-wing opposition Fujimorista grouping, the second largest with 37 seats.

It was drafted in April but has flown under the radar of national and international media until now, a relatively common occurrence in Peru thanks to congress’ lack of transparency.

“This shows, once again, the lack of respect towards the culture, rights and stated wishes of the native population of the Peruvian Amazon,” Roger Muro, lawyer of local indigenous federation FECONAPU, told GlobalPost.

The local population is more than 90 percent indigenous and overwhelmingly opposes the road, he added.

But the text of the bill argues that the poverty of local indigenous and settler communities can only be addressed if they are integrated with the rest of Peru by a road link. Currently, the region can only be reached by light aircraft or boat.

The text claims the region of 5,000 people (excluding the isolated tribes) suffers infant mortality at a rate of 32 percent and illiteracy of 34 percent. The bill criticizes green groups for not acknowledging that “in this world there exist national parks such as Yellowstone … which are crossed by super highways that allow millions of visitors.”

It also argues that a road is needed to “consolidate” the border zone with Brazil. The text claims that many local families prefer to cross the frontier to give birth to their children on Brazilian soil. That would allow them better access to certain benefits a Brazilian nationality can offer, including schools and hospitals.

The main driving force behind the proposed road is a Spanish missionary, Father Miguel Piovesan, who has been working in the region for more than a decade.

He declined a phone interview with GlobalPost but, by email, asked: “Is the possible impact of a land connection less than the impact and suffering that the current state of isolation causes?”

Many local indigenous communities reject that argument, as well as the notion that integration with the rest of Peru is even desirable.

“No one can oblige us to draw closer [to the rest of Peru],” Alfredo del Aguila, from the Purus indigenous reserve, told La Republica newspaper recently. In addition to that reserve, the road would also bisect the Alto Purus National Park, the largest in Peru.

If congress approves the bill authorizing the road, it would also appear to violate Peru’s new Law of Prior Consultation, which stipulates that indigenous communities must be consulted before infrastructure projects are built on their land. That measure was signed into law by President Ollanta Humala last year in the highly symbolic location of Bagua, a town in the northern Peruvian Amazon.

In 2009, more than 30 police officers and indigenous protesters are thought to have died during clashes in Bagua. The protesters opposed measures proposed by Humala’s predecessor, Alan Garcia, that they argued would have further opened indigenous land to loggers and oil companies.

Survival International director Stephen Corry described the proposed road as “suspicious,” and implied it would only benefit loggers and others unsustainably ransacking the rainforest for economic gain.

“This ‘we know what’s best for you’ attitude is not only patronizing, it’s deadly, as the last 500 years of colonialism and ‘development’ of indigenous lands has shown,” he said in a statement.

The proposed road is not the first time Peruvian authorities have attempted to skirt protections for reserves and parks in the Amazon in the name of economic development.

In 2007, the Garcia government floated the idea of lopping off 516,000 acres of the massive Bahuaja Sonene National Park to allow gas drilling in the area. The government was quickly forced to back down after a major international outcry.

The fact that Peru was in the process of negotiating a trade treaty with the United States, with members of the US Congress already concerned about the country’s lack of environmental safeguards, is thought to have played a determining role.