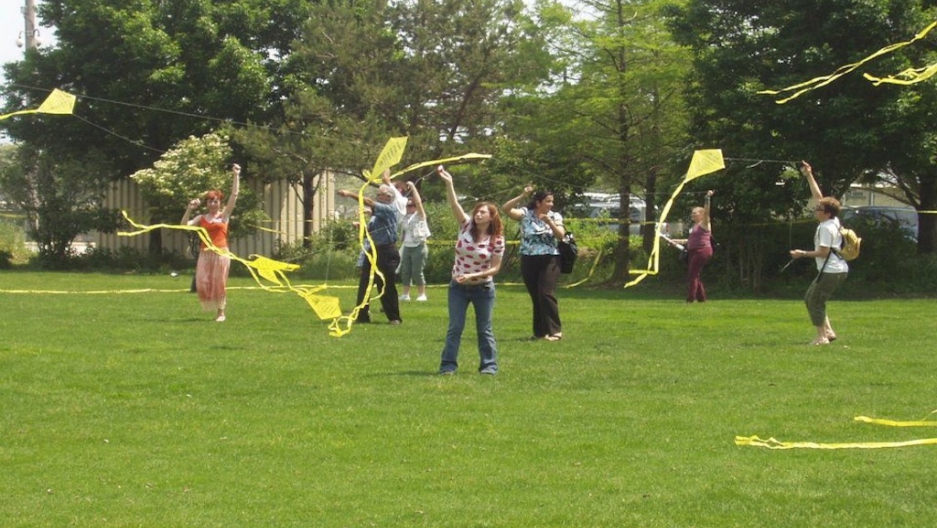 CHICAGO — The clear message of Amnesty International's Shadow Summit, held concurrently with the first day of NATO talks Sunday, was that Afghan women are not victims.

While heads of state discussed troop withdrawal, training of security forces, and European missile defense systems at McCormick Place, the country’s largest convention center, the Swissotel across town was host to an inspiring series of panels where it became clear that Afghan women refuse to be ignored and have taken the responsibility of the future of their country into their own hands.

Nearly 27 percent of Afghanistan's parliamentary seats are now held by women. They have 1500 positions in the Afghan security forces and according to Amnesty, roughly 10 percent of prosecutors and judges are female. Women also make up 20 percent of university graduates and 3 million girls attend schools across the country. There are three women on President Hamid Karzai’s cabinet and for the first time, women were allowed to accompany the Afghan delegation to a NATO summit.

Afghanistan is not the barren wasteland of used and abused women of the familiar media refrain. Instead, it's a burgeoning society where women are actively taking part in civil life, working outside the home and creating positive change in their communities.

But the job isn't done. Afghan women say they will still require the help and support of NATO and the allies, and many fear a return to Taliban-era rule of law, which is imminent if the 2014 troop withdrawal doesn't come with a plan for continued security for women and girls, and a metric for measuring progress of women's rights.

"We need to end our military commitment, but we also need to ensure that US support of Afghan women does not end when our troops leave," said Rep. Jan Schakowsky (D-IL) at an Amnesty International press conference before the event Sunday morning. "This weekend's NATO summit is an opportunity to begin discussion about a cohesive plan for protecting women and promoting their involvement in peace making."

Amnesty International released an open letter to Presidents Obama and Karzai yesterday calling for a plan of action "to guarantee that the clock is not turned back on a decade of strides in education, health, security and employment for women and girls." It adds that the signatories (which include such luminaries as Meryl Streep, William Cohen, Khaled Hosseini, Gloria Steinem and Sting) believe that "if women's progress cannot be sustained, then Afghan society will fail."

Women's rights and security are not mutually exclusive

Former Secretary of State Madeline Albright quoted former ambassador Swanee Hunt,in the first panel, saying, "Allowing men who plan wars to plan peace is a bad habit," a particularly well-received comment in light of the NATO summit happening in another part of the city. She added, "We're in Afghanistan in the first place to secure a better society for the Afghans and there can't be a better society if women aren't part of the solution. We know that when women are treated properly and politically and economically empowered, societies are more stable."

The first panel also included Rep. Schakowsky, a member of the House Intelligence Oversight Committee and a long-standing advocate of women's rights and reproductive freedom. She was boisterous and obviously excited at the prospect of having such Afghan pioneers as Mahbouba Seraj, Manizah Naderi, Hasina Safi and Affifa Azim next to her in the discussion.

She smiled as she refuted the common American opinion that securing Afghanistan and making progress on human rights are mutually exclusive. Schakowsky urged women in NATO countries to stand with the Afghans and press their governments for a monitoring plan in the future.

The Afghan women, who have survived wars, displacement and exile only to come back to Afghanistan to further the cause of women where they face death threats and abuse, were no less excited to dispense valuable advice to the NATO leadership and demand inclusion in peace negotiations.

Azim is the co-founder of the Afghan Women's Network, a coalition of 96 women-led non-profits, and lives in Afghanistan.

"It is very important to put pressure on policy makers to support women in Afghanistan," said Azim with a powerful accent. "NATO must make a strategic plan for a follow-up after 2014. Afghan women need to develop their own capacity and need financial support to play their role in society."

After all, who knows and wants peace more that the women, who have borne the brunt of the decades of war in Afghanistan? But it doesn't come easy. According to Afghan activist and radio host Mahbouba Seraj, before three women were added to the NATO delegation at the last minute, an unnamed Afghan minister said, "Don't worry dears, we'll look out for you."

The backbone of any society is a strong workforce and economic growth, and the military mission will only be successful if citizens can go to work rebuilding the country in peace. In Afghanistan, according to US Ambassador-at-Large for Global Women's Issues Melanne Verveer, there is a USAID directive that has facilitated gender integration in the workforce in nearly every industry, including healthcare, education and even mining. Through these programs the US and its allies can continue to monitor the security of women – but these programs must continue to be funded.

"We have a lens to watch if women are involved in every way, at every level and that every effort is being made in recruitment and training of women," said Verveer, but we cannot abandon this mission, or the military mission will have failed.

Previously radical ideas such as women working outside the home and getting an education are spreading the traditional way ideas are shared between women – by word of mouth. But these shifts are a slow process.

"The problem is that Afghanistan has become a culture of war and changing culture doesn't happen overnight," said Naderi, executive director of Women for Afghan Women, a non-profit that focuses mostly on counseling families through centers across the country. Naderi explained that while there's progress being made on these issues, it's slow going and takes hard, patient work.

Part of what WAW does is speak directly with heads of households, many times interfering in situations such as child marriage, abuse, and other atrocities women and girls face. Naderi works with the families to explain that what they're doing isn't actually compatible with Islam, despite what clerics might say. Many of these people are illiterate and only take the words of extremist clerics to understand their religion.

"It's like a lightbulb going on," said Naderi about reactions she's witnessed in families. "Once you make them understand [the true meanings of Islam], you can see the change. In the majority of cases, the girl goes home, or the women go home, and they're not abused anymore."

Even if the women cannot return home, WAW shelters provide housing and education for women and girls, furthering the potential of the next generation of Afghan women.

Similarly, Hasina Safi, the executive director of the Afghanistan Women's Education Center, which operates in 17 provinces promoting education for girls, said, " If you don't invest in your daughter, she will beg her husband for money. But if you educate her, she can stand on her own feet."

Education, though, will only continue to be part of the lives of Afghan women and girls if the progress achieved in the past decade continues. When it comes to peace talks, it's clear that women want and need to be at the table, but what the outcome might be is anyone's guess.

Safi and Naderi exemplified the confusing debate taking place not just at the mahogany tables of the NATO summit, but also on the ground in Afghanistan — to negotiate or not with the Taliban.

In a fascinating mini-debate the two women discussed both sides at the Shadow Summit.

Safi disagreed, opining that it's better to reason with the Taliban, teach them about true Islam, and convince them of women's badly-needed presence in civil society.

"Rather than saying we don't want to negotiate, we have to show them we're living there and we're a very important part of Afghanistan, so we [must join] the negotiations," she said. "Education is always allowed in Islam. We have to reason with them and [ask] them, 'Which Islam are you talking about?' They are misusing Islam and in that they are misusing our rights."

It's obvious that Afghan women hunger for rights and involvement in the future of their country, and NATO must take this into consideration, said Seraj, or else there will be devastating consequences.

"The world cannot afford to go back to square one. If [the NATO peace plan] is not a success, if we don't achieve what we need to achieve, this isn't going to go down well," she said. "There is no going back. We have to achieve something, make anything and everything possible. There's always possibilities if we really work at it. Because we can't go back."