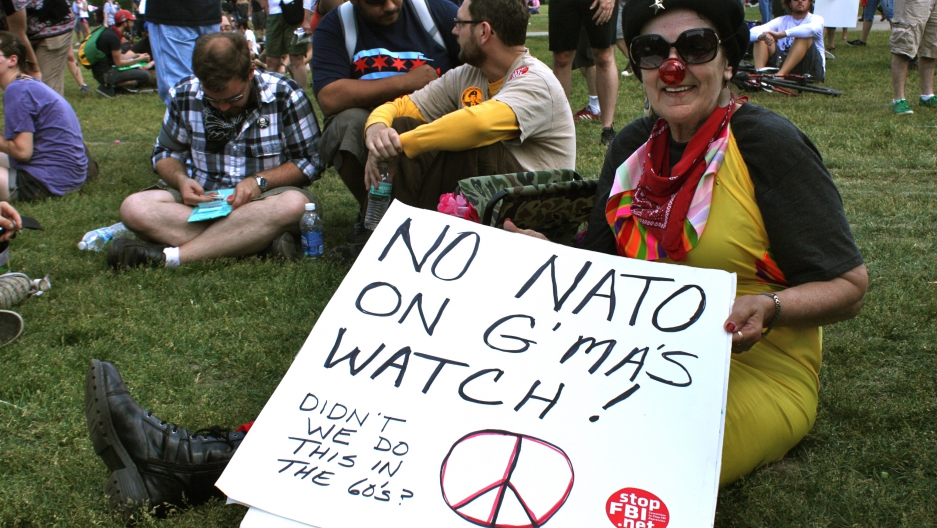 Lounging underneath the summer sun provided a decidedly different experience for Virginia Alvarez, who was arrested protesting the 1968 Democratic National Convention. This year, police monitoring NATO protests helped her find a group she had been separated from.
Credit: Meena Thiruvengadam
Share

The Democratic National Convention Virginia Alvarez protested 43 years ago became a bloody spectacle that helped the Windy City develop a reputation as a violent place where protests quickly morphed into riots.

All sides had been planning for the worst.

Both the American Civil Liberties Union and the National Legal Guild dispatched observers to monitor protests, while the police called in reinforcements from several states. Buses filled with riot police dressed in all black stood by as thousands of protesters peacefully kicked off an anti-NATO march with a rally underneath the summer sun in iconic Grant Park. Helicopters patrolled above head while the occasional bird chirp made it through the noise.

The evening ended several injuries and more than 60 arrests. But compared to the Democratic National Convention in 1968, it was progress.

“There have been isolated incidents, but in 1968 it was different. The police were aggressively running into the crowds and attacking people," Alvarez said from behind the bright red clown nose she wore in protest of this weekend’s NATO summit.

This year, “the police here have actually been pretty good,” she said, recalling how police officers actually helped her find the group of protesters she had been separated from.

But there were those incidents to which Alvarez, a grandmother from Indiana, alluded.

Chicago police have arrested more than 100 people in connection with the NATO protests in the past week. The National Legal Guild said there also have been at least 90 reports of police brutality, many of them stemming from a standoff after Saturday's anti-Nato march.

Eight police officers also have been injured this week. The most serious of those injuries was a stab wound to the leg, Chicago police spokesman John Maribelli said.

Protesters had been trying to inch closer to McCormick Place where 60 heads of state had convened for their first NATO summit outside of Washington, D.C. But riot police who outnumbered demonstrators created an impenetrable wall of black bulletproof vests, shin guards and batons.

At times, those batons were turned on protestors.

After fighting city government, anti-NATO protest organizers were able to find an acceptable route for a march through the heart of Chicago. The city also budged on a frequently criticized law that prohibits the taping of Chicago police officers without their consent.

"Demonstrators have been peaceful and the police have been calm and measured in their reaction," said Steve Mandell, an attorney working with the Reporters' Committee for Freedom of the Press.

One journalist was hit in the head with a baton while another was arrested, stats that aren't bad overall, he said.

Though thousands of police officers were deployed along the march route, they didn't resort to using tear gas or sound canons against demonstrators.

“We’re not allowed to march wherever we want, but with some constraints, I am still able to get my voice heard,” Jeff Tischauser, a suburban Chicago area college instructor.

Tischauser said he felt police officers, for the most part, were able to obtain a “nice medium between allowing people to march against NATO while doing their jobs in protecting the community."