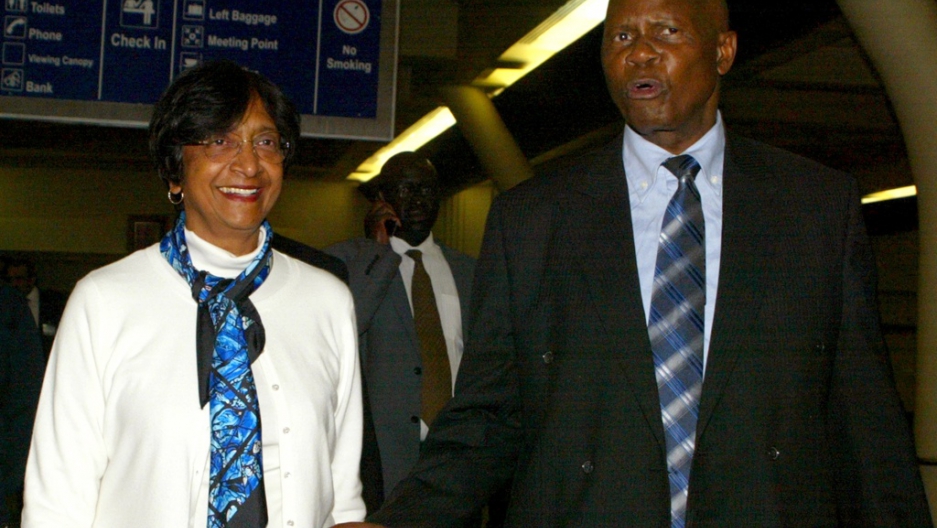 The UN High Commissioner for Human Rights Navi Pillay, left, is welcomed by Zimbabwe Justice Minister Patrick Chinamasa upon arrival in Harare on May 20, 2012 for a five day visit to asses the human rights situation in Zimbabwe.
Credit: Jekesai Njikizana
Share

Zimbabwean President Robert Mugabe reportedly said that he "is tired and wants to retire" but he is staying in power to prevent his ruling party, Zanu-PF, from falling apart.

That's according to former Finance Minister Enos Nkala who spoke to The Standard after meeting with the 88-year-old Mugabe in Bulawayo for an hour-long talk on Friday.

"Mugabe said he is tired and wants to retire but he cannot do so now because ZANU-PF would die," said Nkala, who also served as Mugabe's defence minister in the mid-1980s. "He cannot leave when the party is in such a state. What is holding him now is managing and containing ZANU-PF to prevent it from disintegrating."

Nkala has been a vocal critic of Mugabe in recent years but he was more supportive of the leader when he spoke to The Standard.

"It's easy for people to say 'Mugabe must go, Mugabe must go,' but most don't know that he is the glue that has been holding this country together," Nkala said. Nkala warned that Mugabe's succession remains a delicate issue that if not handled carefully might result in "chaos or civil war."

Mugabe has ruled Zimbabwe since independence in 1980 and has already been endorsed by Zanu-PF to stand as a candidate in elections expected later this year.

Mugabe and his rival, Prime Minister Morgan Tsvangirai, disagree over when new elections can be held. Mugabe wants to take the country to elections as soon as possible, to end the unwieldy coaltion with Tsvangrai's Movement for Democratic Change (MDC). But Tsvangirai and many others insist that Zimbabwe must have a new constitution and fundamental reforms are needed before free and fair elections could be held.

Whether or not Mugabe is tired, he must try to convince the United Nations High Commissioner for Human Rights, Navi Pillay, that all is well in Zimbabwe.

Mugabe will meet with Pillay, who began a five-day tour of Zimbabwe Sunday in which she will assess the situation for human rights by meeting with top government officials, other political parties and civic organizations, reported Reuters. Many organizations warn of an increase in political violence and repression, including Human Rights Watch.

Pillay was welcomed at Harare airport by Justice Minister Patrick Chinamasa, who said "Zimbabwe has nothing to hide in terms of human rights issues," according to AP. Pillay knows quite a bit about Zimbabwe as she is from South Africa where she was a High Court judge.

Pillay's visit is a major step for Zimbabwe. It is the first visit of a UN human rights official to the country. In 2009 UN human rights investigator Manfred Nowak flew to Zimbabwe but he was detained overnight and deported the following day. At the time Nowak condemned the incident as "totally unheard of," reported Voice of America.

Pillay is not expected to go soft on Mugabe and his record of human rights abuses, as many South African officials have done. She has led the documentation of reported killings in Syria during uprisings against the Assad government. She was also a former judge at the International Criminal Court and head of the International Criminal Tribunal on Rwanda’s 1994 genocide. Her visit to Zimbabwe is scheduled to end on Friday.