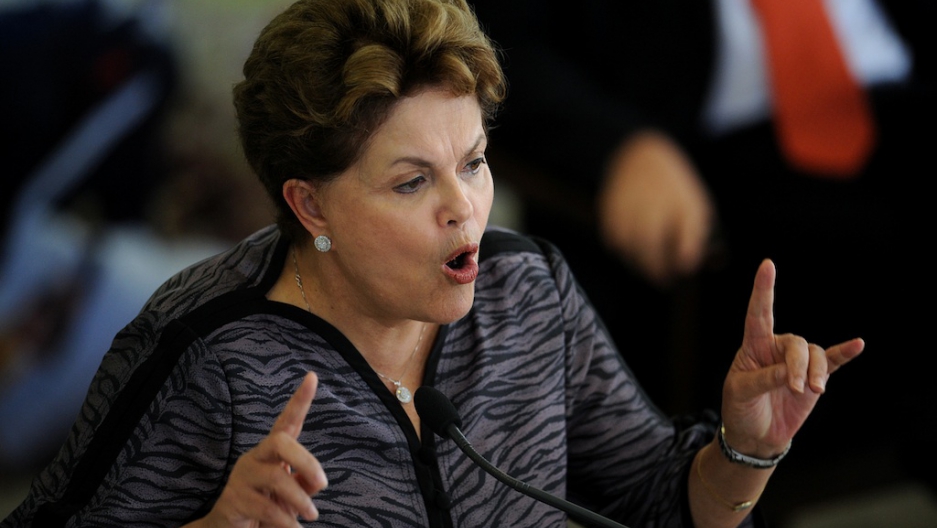 Brazilian President Dilma Rousseff delivers a speech during the launching of PRONACAMPO -- a Federal Government program to improve education policies in rural areas where the illiteracy rate is high, at Planalto Palace in Brasilia, on March 20, 2012.
Credit: PEDRO LADEIRA
Share

SÃO PAULO, Brazil — The Rio de Janeiro state government said Friday it would apologize to President Dilma Rousseff and hand over $10,000 in compensation for the human rights abuses she suffered during Brazil's 1964-1985 military dictatorship.

Rousseff, 64, is a former leftist guerrilla who spent three years in prison, where she was tortured, during the dictatorship, reported the Associated Press. Paula Pinto, a spokeswoman for Rio's Social Assistance and Human Rights Department, said Rousseff is one of 120 who will receive apologies and reparations from Governor Sergio Cabral and June 4 for the human rights abuses they or their relatives suffered.

"Mrs. Rousseff will donate the $10,000 she will receive in June from the Rio government for her jailing under the military regime (1964-85) to the group 'Torture Never Again,'" said Thomas Traumann, a spokesman for the presidential office, according to Agence France-Presse.

The president said she would distribute the compensation money among 316 people from the human rights group.

Rousseff joined the fight against Brazil's military dictatorship when she was 16 and, in 1970 at age 23, she was captured and jailed, reported Press TV. She was then held for three years and frequently tortured in order for her to reveal the names of her fellow guerrillas.

Earlier this week, Rousseff swore in the seven members of a Truth Commission that will investigate the human rights violations that occurred under the dictatorship.