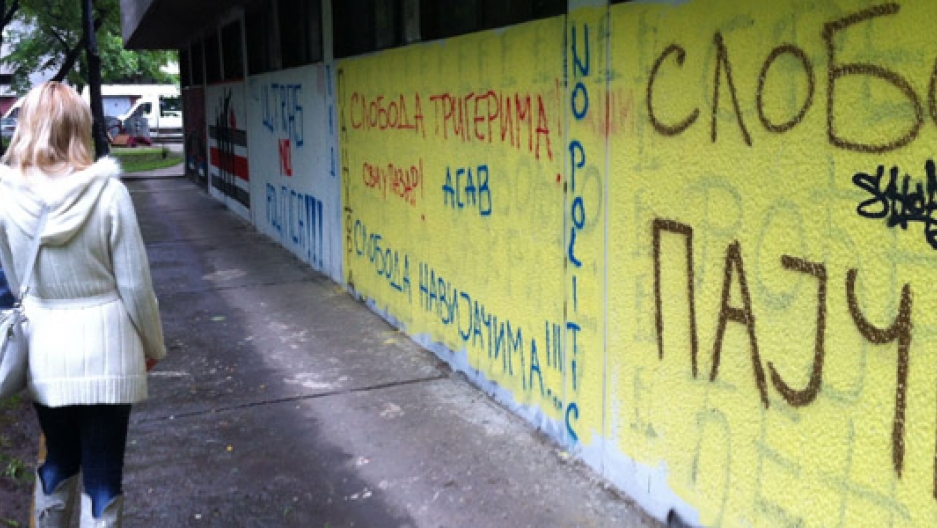 Some ultranationalist groups have put slogans on the wall in Novi Sad, Serbia. (Photo by Nate Tabak.)

Twenty years after the beginning of the Bosnian war, Ratko Mladic went on trial Wednesday at The Hague, but his trial was suspended Thursday while judges considered what they described as disclosure errors by prosecutors.

It's expected to resume, but there's no timetable for when that will happen.

Mladic, the former Bosnian Serb general, was arrested last year in Northern Serbia after years as a fugitive. He’s accused of genocide, and crimes against humanity, including the massacre of 8,000 men and boys at Srebrenica in 1995.

Yet some in Serbia’s far-right consider Mladic a hero, and they continue to pay him tribute.

When Mladic turned 70 this past March, the ultranationalist group Nasi, which means “ours” in Serbian, celebrated in Novi Sad. There was a birthday cake with candles, a toast and a new graffiti campaign called “Generalizacija.” It’s a play on the word, “Kalifornikacija,” the Serbian name for the American TV series “Californication.”

“We put up a lot of graffiti with his face and the word ‘Generalizacija’ to show that after the arresting of General Mladic, we still think he’s a Serbian hero,” said Igor Marinkovic, one of Nasi’s leaders. “When we support General Mladic, we don’t support some kind of monster man who ordered killings. We believe he’s innocent and we hope that he’s going to show in The Hague tribunal that he isn’t responsible for any crimes in Bosnia.”

But some in Novi Sad don’t agree. Novi Sad is the largest city in Vojvodina, Serbia’s most ethnically diverse province. Andrea Jerinic was troubled when Nasi created an elaborate mural devoted to Mladic on the side of an apartment building.

“That’s not graffiti art,” she said. “That’s something that calls for hatred, intolerance, and for killing people.”

Jerinic is a youth leader in the League of Social Democrats of Vojvodina, and her party decided to paint over the Nasi mural.

"We didn’t want to allow that kind of organization to spread their ideas. Actually, we believe that Ratko Mladic is a sign of something really bad and evil because of his not heroic deeds," Jerinic said.

After the last cover-up, Nasi burned a provincial flag and delivered it to the party headquarters. Jerinic was targeted personally.

Jerinic said that just made her more determined. And for the moment, the Social Democrats have prevailed. You don’t see Mladic on the wall, though there are a few nationalist slogans.

Nasi seems to be focusing on smaller Mladic tributes, though one on a nearby building was defaced. Someone added an expletive to cover part of some graffiti that read “Ratko Mladic, General.”

Still, Jerinic said she’s frustrated that many people don’t seem to care one way or the other.

Mihailo Eror, a student at the University of Novi Sad, said he doesn’t think the Nasi graffiti is a big deal.

“Those guys have a right to their own opinion, so, I don’t want to get involved," he said.

But Eror added that Mladic is a thing of the past.

“I think Ratko Mladic was arrested one year ago, and many people in Serbia forgot things about Mladic very fast," he said.

Still, some in Serbia aren’t content to leave it at that. TKV is the pseudonym of a Belgrade street artist, Serbia’s equivalent of Banksy. Her cheeky stenciled designs seem to be just about everywhere in Serbia. They often appear on the same walls adorned with ultranationalist graffiti.

“If you look at what nationalists do, it gives them the image that there are a lot of them everywhere and it’s not like that. They are not the majority,” she said.

TKV and others have fought back by appropriating right-wing graffiti. She added a bindi to the forehead of a Vladimir Putin graffiti done by a Nasi supporter. In Belgrade’s outskirts, another artist turned Mladic into a vampire.

“It’s like a rebellion,” according to TKV. “It’s like saying, you cannot force us to take this crap any more. It’s everywhere, you know.”

TKV’s frustration comes through in her latest work, a stencil of Peter Finch’s character from the 1976 film, “Network.”

The caption reads, “I want you to get mad.”