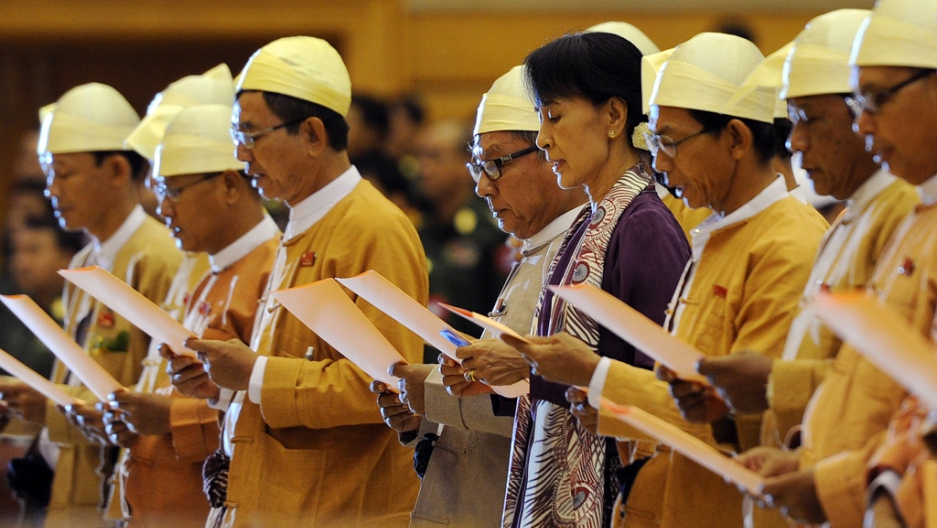 Myanmar opposition leader Aung San Suu Kyi along with other elected members of parliament reads her parliamentary oath at the lower house of parliament during a session in Naypyidaw on May 2, 2012.
Credit: SOE THAN WIN
Share

The Obama administration announced on Thursday that it would ease some restrictions on investment and trade in Myanmar in order to encourage business development, according to the Associated Press.

In recognition of the country's reforms over the past year, the Obama administration is also expected to name Washington's first ambassador to Myanmar, formerly known as Burma, in 22 years. Derek Mitchell, the current special envoy to Myanmar, is expected to fill the post, said the AP.

"We will license certain types of investment in financial services and for businesses to do business in Burma," said a US official on Thursday. He added, "We will continue to sanction individuals associated with the former regime," according to AFP.

The US will continue to maintain wider sanctions as leverage, should it detect "backsliding" by the Myanmar government and need to act quickly, reported AFP.

The White House said, "Burma has made important strides, but the political opening is nascent, and we continue to have concerns, including remaining political prisoners, ongoing conflict, and serious human rights abuses in ethnic areas," according to Reuters.

Myanmar's foreign minister, Wunna Maung Lwin, began a visit to Washington on Thursday and is scheduled to meet Secretary of State Hillary Clinton.

Sen. John McCain has suggested suspending US sanctions except for an arms embargo and provisions connected to individuals connected to the military junta in Myanmar, said Bloomberg.

The European Union suspended sanctions on Myanmar for a year, starting in April, according to The Wall Street Journal.

Opposition leader Aung San Suu Kyi said earlier this week that sanctions against the regime should not end yet, to ensure that the Myanmar government continues to democratize. Speaking via video to a conference on freedom, she said, "The democratization process is not irreversible," according to Bloomberg.