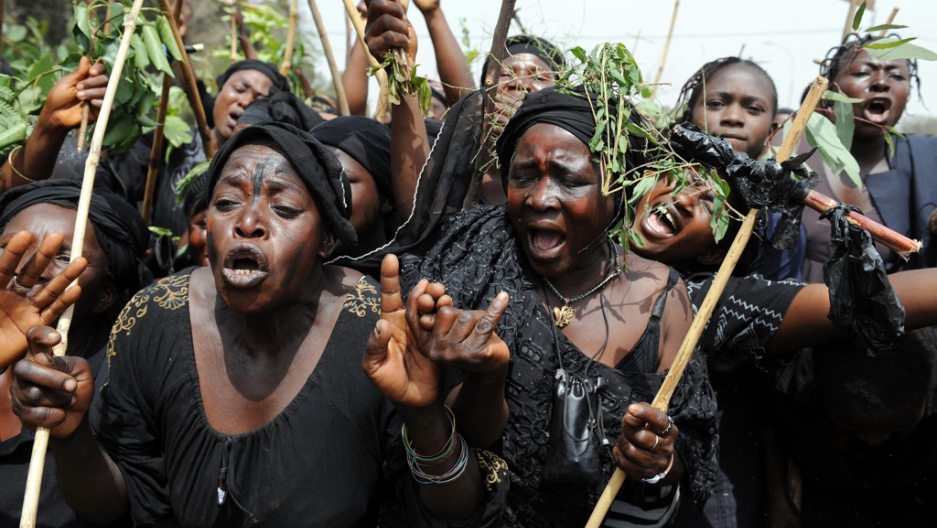 Thousands of Nigerian women march to express grief at sectarian carnage and anger at the failure to stop it in Jos, Plateau State, on March 11, 2010.
Credit: Pius Utomi Ekpei
Share

JOS, Nigeria — More than 1,000 people have been killed in ethnic clashes in this city and the surrounding Plateau State since the beginning of 2010.

The bombings, pitched battles and mass slaughters are separate from the Islamic extremists attacks of Boko Haram and are, instead, a result of conflicts over land and other disputes between different ethnic and religious groups, according to Human Rights Watch.

Jos and the surrounding Plateau State are at the center of Nigeria's "Middle Belt," the area between the country's predominantly Christian south and the Muslim north where the two religious groups live side by side.

Except when they fight.

Jos has been relatively quiet in recent months, partially due to the heavy presence of security forces in the city, said Eric Guttschuss, Human Rights Watch's Nigeria researcher. But he said clashes are continuing in the surrounding countryside, and could escalate in reaction to the increasing attacks blamed on the Islamist militant group Boko Haram.

“The risk is that if those [Boko Haram] attacks continue, that they will spark or set off a further round of communal clashes or communal violence in Plateau State,” Guttschuss told GlobalPost.

Boko Haram is blamed for 450 deaths so far this year, having claimed responsibility for attacks on churches, schools, newspapers and government and security offices.

Both Muslims and Christians in Jos are quick to point out that when they clash, it's not usually about religion or ethnicity. Some locals say the fight began over land and political rights. Others say poverty is at the heart of the conflict. Politicians are blamed for exacerbating the situation by playing people against each other. After years of escalation and retaliation the two communities are now terrified of one another.

It all started over disputes between farmers and nomadic cattle herders who need fields to graze their animals, according to humanitarian worker Aliyu Dawobe Ladduga. The farmers involved in the conflict are generally Christians who are from the Berom, Anaguta and Afizere ethnic groups. The herdsmen are Muslim Fulanis, said Ladduga, who himself comes from a family of Fulani cattle herders.

Ladduga says regular violence emerged in the past decade because the population is growing rapidly and both groups are running out of land.

“Twenty years ago there was absolute peace,” he told GlobalPost. “There were cordial relationships between the cattle herders and the farmers.”

He calls for the establishment of protected cattle grazing lands and the modernization of cattle raising techniques, saying the Fulani people need to abandon their nomadic lifestyle.

Ladduga says the Nigerian government has exacerbated the sectarian conflict by not holding perpetrators accountable, which prompts groups to seek revenge instead of justice. Only a small minority of attackers have been prosecuted, according to Human Rights Watch. Members of Nigeria's security forces have participated in the killings, but have not been prosecuted, alleges the rights group.

In addition to ethnicity, religion, politics and resources, another issue at play in this conflict is civil rights.

Across Nigeria, people are classified as “indigenous” or “settlers,” regardless of how long their families have lived in that particular part of the country. “Settlers” are people who have moved away from the traditional home of their ethnic group. They often don’t enjoy privileges like scholarships, government jobs or full representation in local governments.

In Plateau State, Muslims are generally regarded as “settlers,” and many claim they are being denied their rights as indigenous people. Some Christians claim that the Muslim agenda is to take control of the state.

The conflict is coupled with a rise in fundamentalism across the country, deepening the separation between the two sides, said Nigerian political scientist Hussaini Abdu. “This is not just about Islam,” he told GlobalPost. “Even among Christians there is this increasing surge of back-to-source fundamentalism.”

The news media is also blamed for inflaming the rivalries by describing the conflict as a result of the Christian/Muslim divide and by publishing stories that convince local people they are incompatible because they are from different religions.

At a clinic in Jos, near a checkpoint erected between a Christian and Muslim neighborhood, Salma Musa, a mother of three, says ideological differences are not behind the conflict. In many parts of Nigeria, and in the past in Jos, Christians and Muslims lived peacefully together, intermarrying and sharing customs.

All that has changed in Jos, says Musa, who is learning first aid to prepare for the next attack, which she fears is inevitable.

“We may be in a situation where maybe we have a wedding ceremony,” she told GlobalPost. “And we are afraid there will be a bomb blast.”