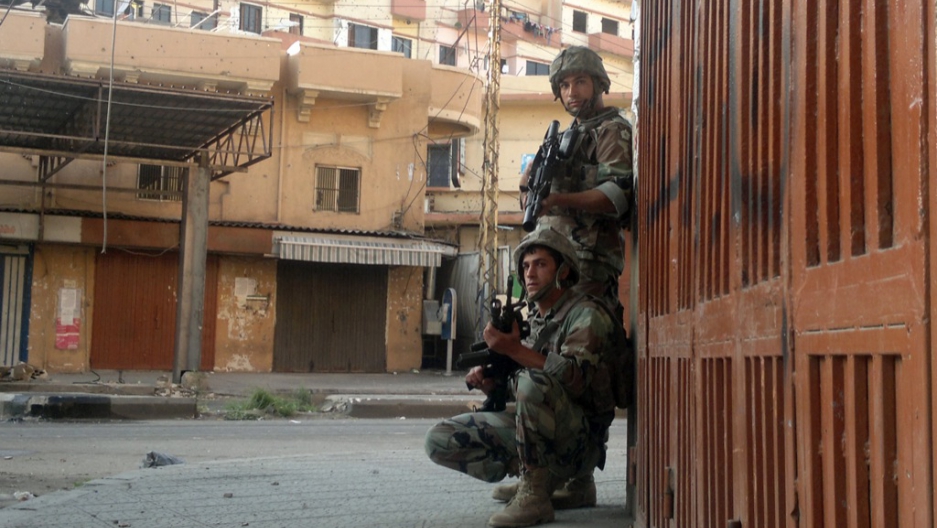 Lebanese army troops enter Bab al-Tebbaneh, one of two rival neighbourhoods in the northern Lebanese port city of Tripoli, on May 15, 2012 to order battling gunmen off the streets. Five people were killed and nearly 20 wounded in sectarian clashes linked to unrest in neighbouring Syria the previous day, according to a security official.
Credit: -
Share

A senior Lebanese security official said at least 150 foreign militants have gained a foothold inside the country. At the same time, he said, Syrian Islamic fundamentalists, supported by patrons in the Gulf, are growing in prominence.

It’s a volatile mix similar to the one that violently upended Iraq during the US-led occupation. But in Syria’s case, it is not entirely clear whether the foreign militants are fighting for the regime or against it.

The government of President Bashar al-Assad has leaped on the increase in militants to bolster its long-held claim that foreign terrorists are at the heart of the popular uprising. The regime has appealed to the UN Security Council for help battling terrorist groups, which Syria says is responsible for two massive truck bombs in Damascus on May 10 that killed 55 people and injured more than 370.

But as last week’s attacks in Damascus grabbed global headlines, experts on Syria warned that Assad’s regime has a history of manipulating jihadi groups to serve its own political interests, and that it remained unclear who ultimately orchestrated a string of Al Qaeda-style attacks that began in January.

On a video posted to YouTube on Feb. 26, a little-known group called the Al Nusra Front took responsibility for some of the bombings. Media reports quoted western officials saying the group, which also claimed last week’s attacks in Damascus, was affiliated with Al Qaeda, without offering further evidence.

Experts, however, have raised doubts about the veracity of the video, indicating it could have been fabricated to support the idea that the government is under attack by foreign terrorists. It features an apparent suicide bomber, his face blurred and his voice distorted, which is unusual for such martyrdom videos. Later a woman, who says she is from Homs, describes how men broke into her house while she was reading the Quran and raped her. But a Syrian linguist said the woman’s accent was identifiably Damascene, not from Homs.

Mathieu Guidere, a France-based author of several books on Al Qaeda, told AFP that the “most credible hypothesis is that these groups carry out — or are made to carry out the attacks — so that the general public confuses them with Al Qaeda,” thereby driving a wedge between citizens and the rebels.

The native rebels of the Free Syrian Army denied any role in the explosions, saying they have neither the capability nor motivation to carry them out. An Al Qaeda-linked jihadi leader with fighters in Syria also denied any responsibility.

“Looked at historically, the Assad regime may be secular, but it has extensive relations with jihadi groups, whether allowing them to transit Syria to fight the US in Iraq or in Lebanon to carry out its foreign policy objectives,” said Andrew Tabler, a Syria expert at the Washington Institute for Near East Policy who spent seven years working in Damascus.

More from GlobalPost inside Syria: Who bombed Damascus?

Some of the foreign fighters in Syria are career jihadis who are suspected of having links to, or of being manipulated by, the Syrian regime.

On April 20, for example, Abdel Ghani Jawhar, one of Lebanon’s most wanted terrorists, was killed by a bomb he was making in Qseir, a stronghold of armed rebels, south of Homs.

Experts said it was as likely Jawhar was fighting in Syria for the regime as against it, given his history of violence in Lebanon, which served Syria’s interests.

Jawhar had been accused of attacks on the Lebanese army, and of playing a role in several political killings, including the 2008 murder of Wissam Eid, a key Lebanese military investigator looking into the assassination of five-time Lebanese Prime Minister Rafik Hariri in 2005, which was initially blamed on Syria. Jawhar was also accused of the 2007 assassination of Waleed Eido, a member of the anti-Syrian March 14 coalition formed after Hariri’s murder.

Fatah Islam, the group that Jawhar went on to join, was founded by Shaker al-Abssi, a former member of Fatah Intifada, a Palestinian militant group known for its connections to Syrian intelligence.

Convicted on terrorism charges and jailed in Syria, where membership in even the more moderate Muslim Brotherhood carries a life sentence, Abssi was mysteriously released early from a Damascus prison and traveled to Lebanon. Shortly after Fatah Islam attacked the Lebanese army, triggering the worst internal fighting in Lebanon since the country’s ruinous 15-year civil war.

“Attacks like the recent bombs in Damascus are not the work of the opposition but rather third parties that can be manipulated. We’ll never get to the bottom of it, but in the end, attacks like this function politically,” Tabler said.

Tabler added that the attacks have only served to help the Syrian government. “The regime benefits very much by stoking fears in the community, and minorities in particular, and making the international community think twice before getting involved in Syria.”

That said, at least some of the foreign militant jihadist groups trickling into Syria do appear to be fighting the regime.

In February, Al Qaeda leader Ayman Zawahiri called on militants in countries bordering Syria to join their “brothers” in fighting the “cancerous regime.”

And last week US Defense Secretary Leon Panetta told reporters that US intelligence indicated “an Al Qaeda presence in Syria." But he said the extent of its activity was unclear.

A member of the Abdullah Azzam Brigades in Lebanon, a militant group named after the founding member of Al Qaeda, told GlobalPost that although his organization played no role in the recent bombings, it had sent fighters into Syria to fight what he called Assad’s “infidel regime.”

“What is happening in Syria today is a jihad,” said the man, known as Abu Hamza, who is wanted in Lebanon for sending foreign militants to fight alongside Al Qaeda in Iraq during the US-led war.

“After seeing all the killing of women and children and the targeting of Sunnis, our Islamic laws tell us this is now a jihad.”

The Azzam Brigade describes itself as takfiri, an extremist belief that brands moderate Muslims or non-Muslims as infidels. It is the same ideology followed by Abu Musab al-Zarqawi, the famous leader of Al Qaeda in Iraq whose extreme violence, including beheadings, eventually appalled his host community.

Syria’s own fundamentalist religious leaders are also joining the fight, using financing from donors living outside the country, confusing the conflict even further and raising the specter of ever more widespread violence.

“Prophet Mohammed said that Syria is the land of jihad and we believe in everything the Prophet said,” Ahmad Abu Berri, a prominent Syrian salafi, told GlobalPost. Salafis are Sunni Muslims who seek to follow the ways of the Prophet and the first generation of Muslims from early 7th century Arabia.

Interviewed in north Lebanon, where he said he was seeking to buy weapons, including rockets and mortars, Abu Berri said his finances came from Syrian expatriates and sympathizers, mainly in Gulf countries.

“The Lebanese government makes it very hard for us. But when you have the source of life,” he said, referring to money, “you can buy anything, even a tank.”

The Lebanese security source said he had seen evidence that Gulf countries like Qatar, Kuwait and Saudi Arabia were funneling millions of dollars to Syrians in Lebanon.

“It comes as aid to refugees but we know they are buying weapons with it,” he said.

Assad warned Arab Gulf countries on Wednesday to stay out of the Syrian conflict, threatening retaliation in a statement made on a Russian television station.

"For the leaders of these countries, it's becoming clear that this is not 'Spring' but chaos, and as I have said, if you sow chaos in Syria you may be infected by it yourself, he told Russia's Rossiya-24 TV channel, according to Reuters.

As the conflict in Syria grows ever more violent and ever more clouded, the Lebanese security source warned of a descent into full-blown civil war.

“Syria is now like the early days of Iraq,” he said. “If the situation continues it will attract more fighters from the region. The Syrian rebels will accept them under the slogan of defending Muslims, but sooner or later they will discover that they have their own agenda. Then they will start killing each other.”

Rami Aysha contributed reporting for this story from Beirut.