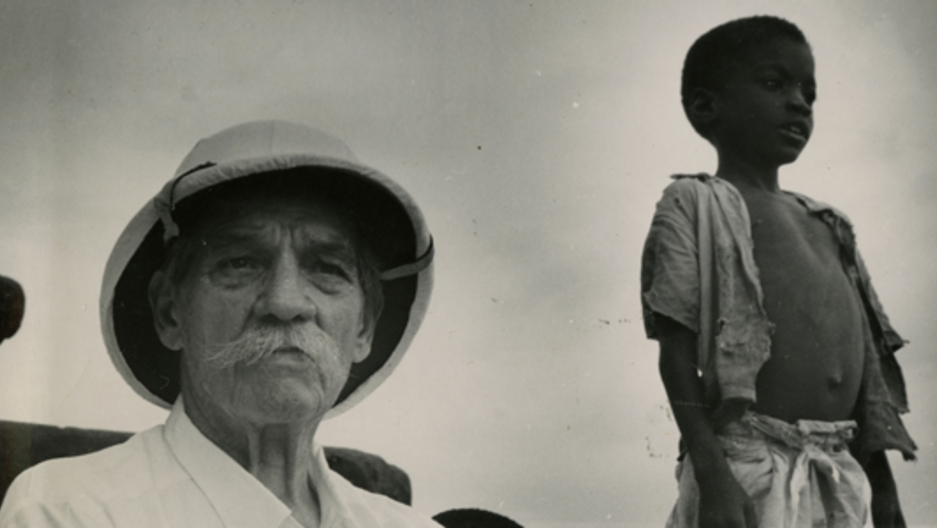 Schweitzer became a doctor and moved to Gabon to atone for the evils white men had committed in Africa. He hoped his life would set an example for others. (Photo: Courtesy of the Special Collections Research Center, Syracuse University Library)

Albert Schweitzer was, in his day, one of the most admired men on Earth.

A German-born philosopher and theologian, Schweitzer decided in 1904, at age 29, to study medicine and move to Africa as a doctor.

His goal was to alleviate suffering. He wanted to atone for the sins white Europeans had committed against black Africans.

From 1913 until his death in 1965, Schweitzer ran a hospital in what was French Equatorial Africa and is now the nation of Gabon.

Schweitzer's life inspired a generation of humanitarians, and his work earned him the 1952 Nobel Peace Prize. But today, the Albert Schweitzer Hospital is struggling to achieve the goals of its founder while adapting to a new century and a different Africa.

The downside of charity

The Albert Schweitzer Hospital sits on a sprawling campus above the Ogooué River, in the town of Lambaréné. The grounds are lush, filled with mango and breadfruit trees. Dogs and chickens and children wander among the buildings.

The hospital treats almost 30,000 patients each year. Although it is not Gabon's most modern or well-equipped hospital, some say it provides the best care in the country. Patients often travel for hours to be treated here.

"Back there you have maternity, you have pediatrics," said Dr. Hans-Peter Müller, pointing to low-slung buildings connected by covered walkways. "Far back it's the internal medicine."

Müller is a Swiss surgeon who first volunteered here in 1996. He now serves on the hospital's governing board.

Müller has helped raise millions of dollars for the hospital back home in Switzerland, and he comes to Lambaréné several times a year. Yet when I met up with him last fall, he was questioning what all of this effort had accomplished.

"You see, those people, they are very warm," he said while greeting local children and young mothers outside the hospital. "But behind, of course, they always wait for something. 'A white man is coming, let's ask him to do something for me.'"

He shook his head. "It's this dependency. And whose fault is this? Of course, it's ours. We have come in and made them a bit like this."

It's a dilemma many charities face. How do you ensure that good deeds don't breed dependency? How do you help people to help themselves? How and when do you hand control to locals?

History in black and white

"The doctors we had were European," she said. So were the nurses and the office staff. But in recent years, that's been changing.

Today, almost all of the nurses and doctors and office workers are black African. Much of the hospital's funding comes from the Gabonese government. The board is majority Gabonese.

And yet, whites have generally remained in charge.

Taking that last step — sharing control of the hospital — requires trust on both sides of the color divide. And, recently, that's been in short supply.

A year of turmoil

For some time, black staff had complained about the most recent white director of the hospital, a retired French military officer. They said he was arrogant, abusive, and racist.

"He hired a technical director whom he asked to oppress the workers, the Gabonese workers — the black workers — saying that the Negroes don't work properly if they don't oppress them," said the hospital's chief accountant, Pierre Claver Bouka.

The white hospital director, Marc Libessart, adamantly denies having said that. He contends that the staff was embezzling — stealing funds, paying unearned overtime. Libessart says he tried to clamp down, and that caused the workers to rise up against him.

Indeed, last May, the staff staged an illegal strike. They blockaded the hospital, chanted, and carried a coffin with Marc Libessart's name on it.

Libessart and two other white, French managers departed the hospital — and the country.

The events left the hospital without a permanent director and left everyone scarred. Some European board members even contemplated closing the hospital for a time.

"We only heard through e-mails what the hell was going on, and we said, we can't go on like this," said Hans-Peter Müller. "People carrying around coffins? You can't accept such [behavior]."

Many Gabonese workers were also stunned by the turn of events.

"Someone had a vision — the great doctor, Albert Schweitzer, was looking across the river and had turned his back on the hospital," said nurse Mama Sophie. "In our world view, it means he was very angry about how things were going here. Because the dead aren't dead. Everything that happens, the dead see."

The board tries a new direction

Meanwhile, there was tension on the hospital board — a "deep ravine," as one member called it, between the Gabonese and the Europeans.

The one American on the board — Lachlan Forrow, a doctor at Harvard Medical School and Boston's Beth Israel Deaconess Medical Center — was troubled by the antagonism.

"The European board members were frustrated over years that the Gabonese board members were not effectively enough engaged in the hospital. And then they say, 'Nothing's going to happen unless we do it ourselves,'" said Forrow. "The attitude that's experienced by the Gabonese is these white people from outside don't respect our efforts, so why try? And then you've got this vicious circle."

Forrow saw an opportunity to change that pattern of behavior.

Gabon had elected a new president who vowed to tackle the corruption and inefficiency that has long plagued this country.

Meanwhile, Lachlan Forrow became president of the Schweitzer Hospital's board, and he vowed to reach out to the new government and to the Gabonese members of the board. He wanted them to help chart the hospital's future course.

"We're going to show how you do it in a spirit of solidarity rather than charity," he said last October.

Since then, he has found that putting the philosophy into practice isn't easy.

Gabon's president had promised new funding for the hospital, but the money took months to materialize, and Forrow had to fight to get it.

The president wants the hospital to train Gabonese medical students and work more closely with the public health system. Forrow embraces those goals, but he says now that coordinating efforts with the government has been frustrating.

"There have been a number of times when it really has seemed like this is hopeless," he says. He has asked himself, "Am I crazy? Can this possibly work? Is the country ready?" He acknowledges facing "times of deep despair."

But he believes the hard work is starting to pay off in a new relationship between locals and outsiders — blacks and whites. And he can point to a major recent development.

Several months ago, I asked hospital workers whom they would like to see as a replacement for the French hospital director who had been driven out by the staff. Would they like a Gabonese director?

"No," said Mama Sophie. "A white man should be the director. Three quarters of the staff want the hospital director to be white."

Gabonese members of the hospital board agreed. "We want to maintain the multicultural character of the hospital," said board member René Hilaire Adiaheno.

But Hans-Peter Müller, the Swiss surgeon, said Gabonese members of the board shared with him a different reason why they wanted a white director; they didn't think anyone from their country would have the right skills. "We are not ripe yet," Müller recalls them saying.

Board president Lachlan Forrow wanted to challenge that thinking.

He found an experienced Gabonese hospital administrator — Antoine Nziengui — and hired him to be deputy director and to serve as interim director. After several months, Nziengui won over the staff and board, which voted unanimously last month to make him the permanent director.

"The Gabonese staff, when I was at the hospital this past time, told me how wonderful Antoine was," Lachlan Forrow said after returning to the United States from the most recent board meeting. "One of them — it may even have been Mama Sophie — said, 'He has saved the hospital.'"

That may be an overstatement.

But for the first time since the hospital was founded 99 years ago, an African is in charge of finding the solutions.