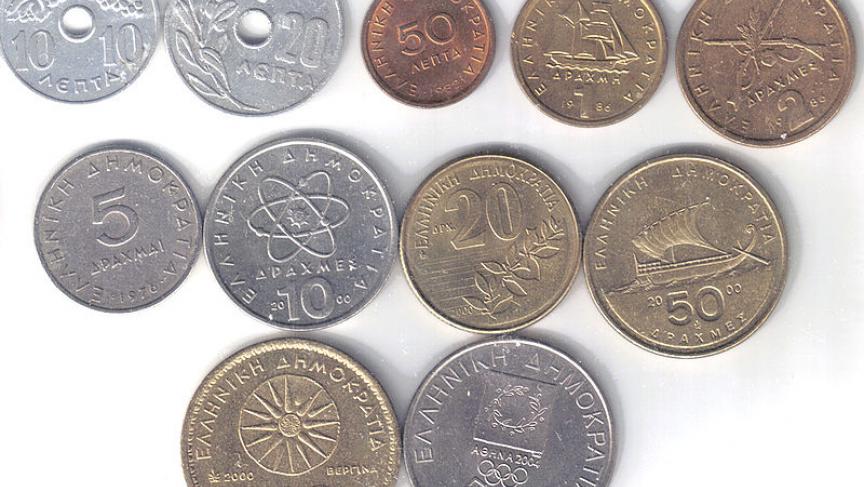 Greece may be in for a return to its own currency, the Drachma, if the country's government and economic situation can't be stabilized.

If you like neat, tidy stories with predictable endings, the ongoing drama of Greece and the euro probably isn’t for you.

It wasn’t supposed to be this way.

The euro coins and bank notes officially launched on January 1, 2002. No one ever made provisions for any country to leave the euro.

“This was seen as being the pinnacle of Europe’s integration efforts, and was going to be a huge success. So why should you even think of failure? Why think about divorce when you were just getting into a glittering marriage?” said David Marsh, an author of a history of the euro.

The financial stresses of the past two years have left that marriage on the rocks.

European officials continue to say that a Greek exit is not under discussion. Too much political capital had gone into creating the euro, they argue, and no one wants to see it fall apart.

But now, with Greece imploding politically amid increasingly vocal protests against European-imposed austerity, some are thinking the unthinkable.

“Previously, the euro had an almost religious aura about it. You were not allowed to question it. It was like questioning the existence of God,” said David Lascelles of the London-based Center for the Study of Financial Innovation. “That is gone now and people are prepared to address the realities, and even the possibility of break-up, without throwing up their hands in horror.”

Well, that last bit might not be quite true. Some analysts predict “sheer chaos” and “Europe’s worst nightmare” should Greece exit the single currency.

One thing’s for sure — such a break-up would put Greece and the eurozone in uncharted territory.

There are huge legal questions — would Greece also have to leave the European Union? Would treaties have to be renegotiated? And what about the practicalities? How would Greece return to the drachma?

“It would have to happen quickly,” said Dawn Holland, co-author of a report on the euro debt crisis, “because if it were announced that it was going to happen next week, everyone would pull their money out of Greece and put it somewhere else.

Holland said bank accounts would probably have to be frozen for a time.

"There would be massive disruption to the banking system. Probably whatever cash was in the machines would be immediately withdrawn and put under the mattress. But anything that’s held in the banks would be re-denominated into the new currency immediately," she said.

That new currency, according to experts, would almost immediately be devalued by as much as 70 percent. That means a Greek with 1,000 euros in the bank would have about 300 euros worth of drachma after the conversion.

Short-term pain, for sure, according to Phillip Ammerman, a Greek-American businessman based in Athens.

“I would predict that if Greece does leave the euro, the next two years will be extremely difficult, but the rebound would be faster," he added.

Ammerman means the devaluation of the currency would make Greek exports cheaper and, eventually, more competitive. The Greek economy could get back on its feet, and maybe even thrive.

“The likely impact of an exit and a devaluation that would accompany it would be a surge in inflation that not only itself has pernicious effects, but also undoes most of the benefits of the devaluation itself, leaving the country with high inflation, and not much to show for it in terms of improved competitiveness,” said Larry Hathaway with UBS in London.

So the Greeks seem trapped. Do they keep the euro and accept continued austerity with no end in sight? Or do they go back to the drachma, take a big hit, and then – maybe — recover?

But this isn’t just about Greece, because if Greece leaves the eurozone, other financially troubled nations — Portugal, Spain, and even Italy — might follow.

“The reason this contagion is possible, if there’s an exit of Greece, is because there is no real firewall around the big economies of Europe,” Verhofstadt said. “We have some fire extinguishers, rescue funds, but a real firewall, like the Americans have with their dollar, we don’t have it.”

Of course, all of this talk may be premature. Opinion polls show more than 70 percent of Greeks want to stay in the euro.

Some suggest Greek politicians know that the rest of the eurozone is not prepared for a Greek exit, and they are using that as leverage to try to get the European leaders to ease up on austerity measures.

European leaders, for their part, keep insisting that they want Greece to remain in the eurozone, but they are also adamant that Greece must stick to the austerity measures it agreed to in order to continue to receive bailout money.

Both sides are playing a dangerous game, said Andrew Balls, of PIMCO investments in London.

“It has been a game of chicken over one or two years, and the danger is that policy makers lose control. I don’t think they have a plan B,” Ball said. “It’s not obvious they have the political ability to hold it together. On the Greek side, the political system seems to be imploding. Why would anyone think this will lead to a clearer outcome?”

For its part, the IMF said it has to be “technically prepared for anything” when it comes to a potential Greek exit. American officials, worried about what a Greek exit might do to the European economy, are sure to be looking on anxiously as well.