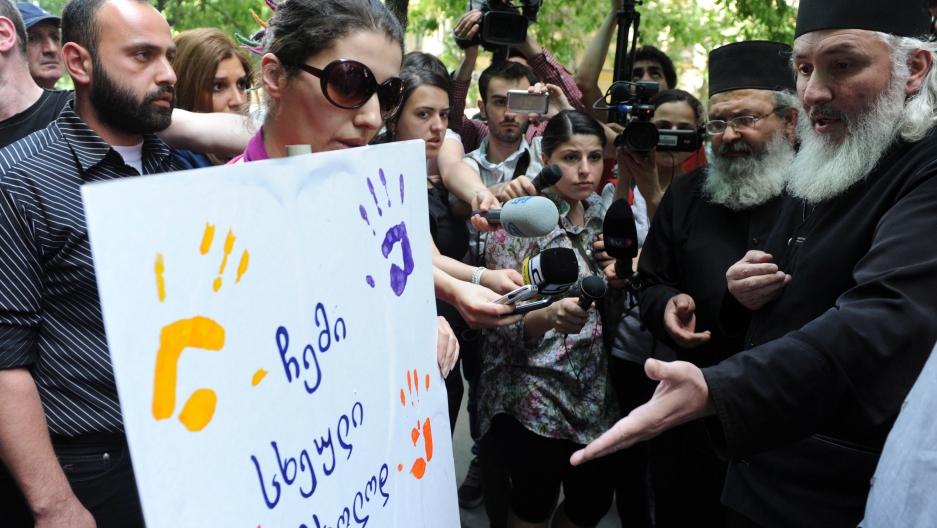 Orthodox priests (R) argue with gay rights activists (L) as they rally in the Georgian capital Tbilisi on May 17, 2012.
Credit: VANO SHLAMOV
Share

LONDON, UK – Religious protesters have halted a small gay rights march in the Georgian capital of Tbilisi, leading to a fistfight and participants’ placards being smashed.

They had gathered outside the Tbilisi state concert hall and were preparing to march towards parliament when activists led by Orthodox Christian priests confronted them and a scuffle broke out, according to the Associated Press.

The religious protesters shouted abuse and threw punches at some of the participants. One of the priests told the Agence France Presse: “How can you promote such a thing in the streets where there are children? It shouldn’t be allowed.”

One of the march’s organizers, Natia Gvianishvili of the rights group Identoba, told the news agency: “This shows that Tbilisi has a long way to go to become a modern European city. We expected a negative reaction but did not expect to be attacked.”

When fighting began, police broke it up, and arrested demonstrators from both sides, according to euronews.

The Orthodox Church is the main religious body in Georgia, a country of about 4.3 million people. Homosexual sex was decriminalized in 2000, and rights groups are currently seeking to have discrimination on the grounds of sexual orientation outlawed, the BBC reports.