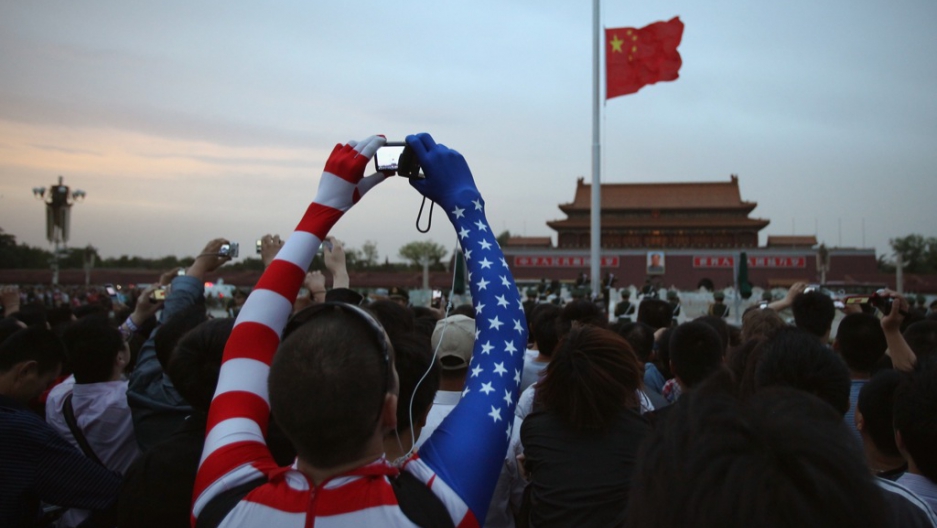 An American man watches the customary ceremony of lowering flag at Tiananmen Square on May 11, 2011 in Beijing, China.
Credit: Feng Li
Share

HONG KONG, China — Foreigners living in Beijing are steeling themselves for three months of being stopped on the streets and asked, “Where are your papers?”

The official announcement posted on Weibo, China’s equivalent of Twitter, showed a giant fist smashing the air, accompanied by instructions to call a hotline to report suspicious foreigners to the Public Security Bureau.

Police have said that they will carry out random checks of non-Chinese at bars, nightclubs, and universities — warning that all foreigners should have their passports and documents on them at all times, a regulation technically required by law but rarely enforced.

“We will enforce the rule and make sure that every foreigner knows that,” Lin Song, the official in charge of the crackdown, told China Daily.

The announcement was greeted with enthusiasm on Weibo, with one user declaring his “hope that these illegal immigrants will be thoroughly investigated across the country, otherwise if this group of foreign trash escapes overseas it won't be easy!” On Tuesday, the phrase “illegal foreigners” surged into the top 10 search terms on Baidu.

Beijing is expected to be just the first city in China carrying out the policy. Chengdu, the largest city in Sichuan province, has already announced it will introduce a similar campaign.

While residents have come to expect that big events, such as the upcoming power transition at the end of the year, will be preceded by a crackdown — as happened before the Olympics in 2008 — some foreigners are concerned that this time could be different.

“In the time I’ve been here, it’s the first time they’ve ever explicitly said, 'we’ll crack down on those who don’t carry their passport and registration at all times,’” says Charlie Custer, editor of China Geeks and a resident of Beijing. “Even for China, that’s a bit dystopian.”

Some suspect that the policy is intended to whip up xenophobia to cement the Party’s control after an unprecedented series of snafus embarrassed China on the international stage. Years of carefully sculpting Beijing’s image flew out the window when Chen Guangcheng, the blind legal-rights activist, and Wang Lijun, an iron-fisted police chief, each fled to the US embassy for protection from their own government.

And with the Party preparing for its transfer of power this autumn, the crackdown may be intended to serve as a way to unite popular support.

“By deputizing the populists against the foreigners, it’s a way for the authorities to say we’re all in this together — the government and the people — against the illegal aliens,” says Jeremiah Jenne, a PhD candidate at the University of California-Davis, who has lived in Beijing since 2002.

In previous weeks, nationalist fervor has been stoked by the country’s continuing standoff with the Philippines over Scarborough Shoal, a disputed island in the South China Sea. The Global Times, a pro-government tabloid, wrote that “peace would be a miracle” if the Philippines did not relent.

More from GlobalPost: Will the US get involved in the China-Philippines standoff?

It is against this tense backdrop that even legal non-Chinese residents are made nervous by the crackdown. While acknowledging that the government is right to uphold the law, Jenne said "there is definitely something happening in attitudes to foreigners" in China. “As someone who’s been living here a long time, I definitely can feel a sea change going on.”

An estimated 120,000 foreigners now live in Beijing. Since 2008, city officials have processed 13,000 cases of illegal entry or improper employment, according to state-run Xinhua news agency.

“If a state-owned company isn’t giving work visas for workers there,” he said, “what are the chances an average regular company is going to be able to get that?”

Indeed, while the overall number of outsiders visiting China has exploded, from 740,000 in 1980, to 27 million in 2011, according to Xinhua, residents say it remains difficult to find official sponsorship to work.

“I've been told by several sources that it becomes more and more difficult for foreign people to obtain a work permit in China, year after year,” says Tom Van de Weghe, a Belgian journalist who has lived in Beijing for five years.

“Some people could make the conclusion that China is becoming less and less welcoming to foreigners. But I truly hope this is not the case.”

Still, some non-Chinese residents endorse the 100-day “clean up” campaign, seeing it as a justifiable response to Beijing’s emergence as an alluring global destination.

“I don’t think it has anything to do with fomenting jingoism,” said Bill Bishop, an investor and consultant who has lived in Beijing for more than eight years. Calling the measure “long overdue,” he asks: “Why should illegal foreigners in a first-world city like Beijing expect to be treated any differently than illegal foreigners in the US or Europe?”