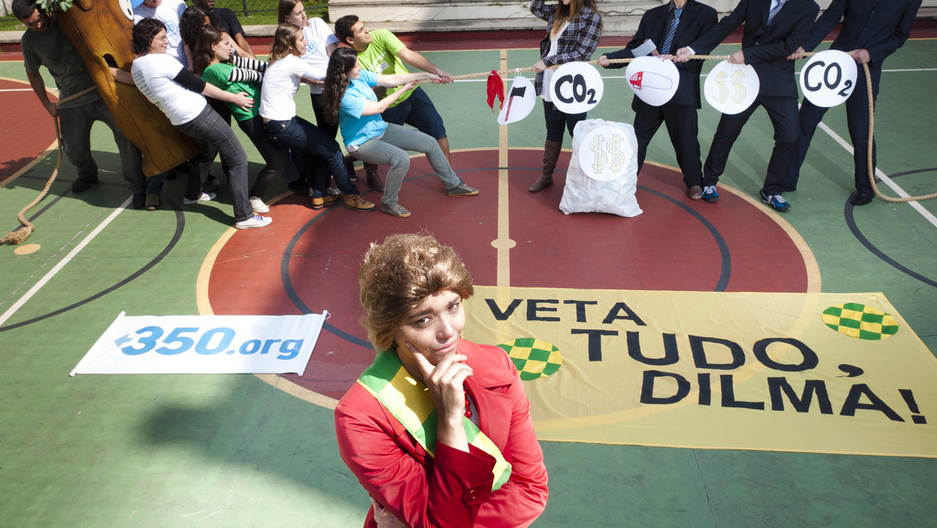 The Forest Code is the set of laws designed to protect the country's forests. Brazil is home to 40 percent of the world's rain forests.

The new Forest Code would unravel many of the detailed environmental rules designed to protect these forests. Under the current code, landowners are required to conserve forests on their land, and are restricted from logging in certain vital areas, such as along riverbanks.

Since the government started collecting data on deforestation in the 1970s, an area of rainforest nearly the size of France has been deforested to make way for agricultural production. According to the government’s Institute for Applied Economic Research, rules in the new Forest Code could lead to the loss of as much as 190 million acres of forests.

A piece of land cleared to grow soybeans or graze cows is far more valuable than the same piece of land with trees on it, so farmers regularly violate the Forest Code. People that cut down their reserve of trees must reforest it and pay fines. Yet 4.6 million agricultural producers are in violation of the law.

Eduardo Riedel represents those producers as vice president of the National Federation of Agriculture and Livestock. He says Brazil needs the new Forest Code Congress passed because the current law is out of step with reality. The new code would grant amnesty to people who illegally deforested their land before 2008. People won't have to pay the fines as long as they agree to reforest their land.

But environmentalists and scientists see two problems with that rationale. First is the problem of enforcement. The Brazilian Amazon is roughly half the size of the continental United States, yet has just 400 environmental police to patrol the region and enforce laws. A second concern is that the amnesty clause could actually spur more deforestation.

Daniel Brindis, a forests campaigner for Greenpeace in Brazil, said the new Forest Code would degrade respect for conservation laws.

"The message is that you can violate the law with impunity," Brindis said. "It’s actually sending the message that there might be another round of amnesty on the way, or you just don’t need to take the code seriously."

Another change in the law directly encourages deforestation by allowing landowners to cut down trees closer to riverbanks. That troubles Philip Fearnside, a research professor at the National Institute for Research in the Amazon.

"Those riverside forests are very important in terms of avoiding flooding, and there also very important for biodiversity because those are the corridors that allow animals and plants to move between the different patches that are left after deforestation has advanced," Fearnside said.

Supporters and detractors of the changes to the law are both confident President Rousseff will side in their favor.

"Brazil is now over 80 percent urban, so most of the population has no direct economic stake in being allowed to deforest more," Fearnside said. "Opinion polls also show that most of the population was against this, but still the original proposal in the lower House passed by a margin of seven to one for something that’s basically against the interest of the majority of the Brazilian population."

"President Dilma Rousseff stands at a defining moment for her presidency," Naidoo said."The choice is clear. She can ignore the Brazilian people and side with 'destruction as usual' as enshrined in the new forest code, or exercise her veto and support the call for a new zero deforestation law."

Greenpeace and other environmental groups hope the timing of the United Nations Rio Earth Summit, scheduled to take place in June, will affect Rousseff's decision. Over 125 heads of state and 45,000 delegates are expected to attend the largest environmental conference in a generation, held in Rio de Janeiro.

In a statement, Naidoo wrote the Rio Earth Summit will lose credibility if Rousseff sides with agricultural interests.

Sen. Katia Abreu, president of the Confederation of Agriculture and Livestock of Brazil, said she does not think international pressure from groups like Greenpeace will succeed.

"Brazil is the only country that has the moral authority to discuss (Brazilian) environmental issues," Abreu said. "I don't understand why the NGOs oppose the changes. The main NGOs are European but I do not see them asking Europe to revive its forests. Why only in Brazil?"

The president's decison has filtered into popular culture and sparked a widespread campaign called "Veta Dilma!" or "Veto Dilma!"

The slogan even made its way to an awards ceremony for former President Luiz Inacio Lula da Silva, hosted by Brazilian actress Camila Pitanga. Pitanga broke protocol to call out "Veta Dilma!" to loud applause.

President Rousseff has until May 25 to make her decision.