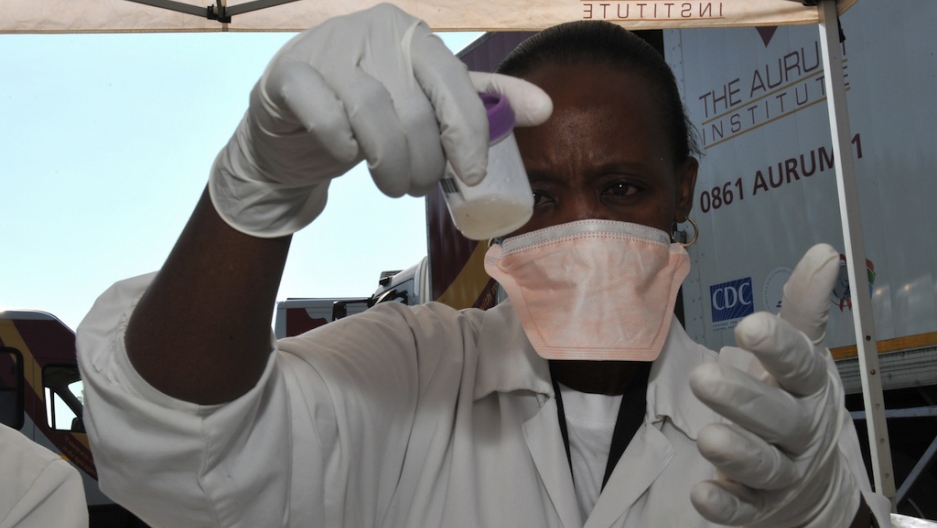 A medical worker is pictured at a mobile testing facility for tuberculosis (TB) at Driefontein Gold Mine in Carletonville, South Africa on March 24, 2012.
Credit: ALEXANDER JOE
Share

NEW YORK – In the gold mines of Southern Africa, the TB rates are among the highest in the world. Miners pass it with a simple cough. Or they harbor the TB bacterium and it becomes unleashed if they are infected with HIV; suddenly TB starts to destroy their lungs.

For every 100,000 workers in these mines, 3,000 have tuberculosis, and many have often-fatal, drug-resistant strains of TB.

The mines are breeding grounds for TB. But they also may become the ground on which to fight back.

Anglo American announced Tuesday at the GBCHealth Conference here that it has agreed in principle to make its mines available for TB vaccine trials organized by Aeras, a non-profit that has 12 TB vaccine candidates now in various stage of research. No formal agreement has been reached, but Anglo American’s spokesman vowed to make it happen.

“The current vaccine we have for TB is useless. It’s the biggest waste of money – it just doesn’t work,” Brian A. Brink, Anglo American’s chief medical officer told the conference. “Up to now there has been no investment in TB vaccines, but Aeras has done it.”

He turned to Kari L. Stoever, vice president of external affairs for Aeras, sitting next to him on the stage. “You have got vaccine candidates,” he said. “We have to go to the next leg now, the big Phase III clinical trials, where you need big populations (of people infected with TB).

“We are in the mining industry, and we have big populations,” Brink said. “We have very high incidence of TB, and using some of our health systems, we could [be home] for a new clinical trial site for new vaccines. A TB vaccine for the world will make a profound difference. We’ve got a long way to go to build a vaccine site, it requires a lot of consultation, and it still will take a number of years. But we’ve got to start somewhere and we are starting now.”

Stoever said later the proposed arrangement has come together quickly. She said much more needs to be done to find new TB vaccines, drugs, and diagnostics. The push for new tools has taken on new urgency in the past few years. For instance, for the first time, drug candidates are being tested together in arrangements put together by the TB Alliance, another non-profit, in hopes of finding combinations of drugs that are effective against drug-resistant TB. No new TB drugs have been developed for more than 40 years.

“We need more of an investment on the future in TB control and to develop these tools as quickly as possible,” Stoever said.

Brink said Anglo American, one of the world’s largest mining companies, believes it needs to do much more.

“We are all worried about HIV/AIDS, but TB, which just goes alongside AIDS, that is really frightening,” he said. “If we can’t manage the AIDS and TB epidemic, we are going to have a catastrophe.”