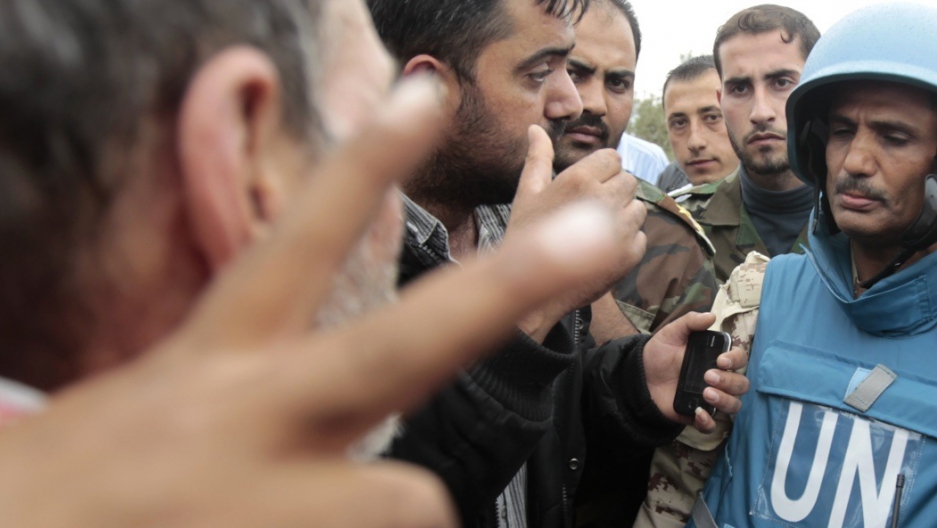 Syrian anti-regime protestors gather around UN observers in the village of Azzara in Homs province on May 4, 2012.
Credit: Joseph Eid
Share

IDLIB PROVINCE, Syria — Here in northern Syria, residents say they have little faith in the joint UN-Arab League plan that aims to broker a political solution to the conflict that has been raging for 14 months.

Their pessimism seemed to be confirmed Tuesday when alleged government forces attacked a group of demonstrators that had surrounded the vehicles of UN peacekeepers visiting the town of Khan Sheikhoun, here in Idlib province.

The unidentified Syrian forces opened fire on the convoy as it arrived to witness a funeral procession, killing 25 people and injuring at least 100 others.

At this stage it is unclear whether the target was the UN representatives or the dozens of Syrians gathered around the UN vehicles, many of whom were attempting to report abuses by the government.

“All of us thought from the beginning of the UN mission, from the first day, that it would fail,” said Mustafa Al Haja, a university student living in Idlib. “Now this is the end. It is enough. The main aim of the UN plan is to stop the killing. But the killing is continuous. The Free Syrian Army is our last hope. The change can only come from our hands.”

More from GlobalPost inside Syria: Who bombed Damascus?

Even prior to the attack, many voiced serious doubt about the plan, which was championed by Arab League envoy and former UN Secretary General Kofi Annan.

A local Free Syrian Army leader, Abu Ardil, speaking from the group’s base in the city of Idlib on Tuesday, said the UN plan had so far little positive effect. He said the killings and bombings continued unabated. But now, he said, it also occurs after dark, when the UN curfew is supposed to begin.

The day before the attack, around 3,000 locals in the village of Kureen, also in Idlib, formed a mass demonstration around a UN convoy as the observers attempted to meet with leaders in the town.

Children waved shrapnel, fighting their way through the crowds toward the UN representatives in their cars. Many of the protesters held up footage of clashes and killings they had recorded on their mobile phones as they shouted complaints toward the team of six UN offcials.

“Almighty God, save the Free Syrian Army, our protector against the regime forces! The people want the execution of Bashar!” the crowd chanted, referring to Syrian President Bashar al-Assad.

“We don’t have media. We don’t have journalists. We are isolated. The people want to voice their stories,” said Syrian activist and university professor, Abdul Aziz Agimi, as he too fought his way through the crowd holding documents that listed names of villagers killed or injured.

Residents across Idlib said the attack on the UN convoy in Khan Sheikhoun further dimmed any hope for a peaceful resolution.

More from GlobalPost in Syria: Cease-fire? What cease-fire?

“Everyday the Assad regime kills us. Even they kill in front of the eyes of the observers. Still no one helps us from the outside,” said Ahmed, a truck driver from a village on the outskirts of Idlib city, the provincial capital, who asked that his last name not be used. “Kofi Annan is a liar. Every day there is more shootings.

"There are deaths, injuries, tanks in the cities. He didn’t send a clear message to Assad and so nothing has changed. The Annan plan does not apply on the ground, only on paper.”

A renowned activist from the city of Ariha, who asked only to be called Mohammed because he is wanted by Syrian authorities, spoke to GlobalPost the morning before the attack on the UN convoy.

“We believe this plan will not succeed because none of the six points have been implemented. No prisoners have been released. Attacks have not stopped. And we are still not allowed to demonstrate,” he said from a secret rebel base in Ariha as two UN officials met with members of the Free Syrian Army in an adjacent room.

“In an effort to appear to be compliant with the plan, the Assad government has altered its tactics,” he said, adding that the end result was still the same.

“They have withdrawn the heavy weapons from the inner cities, but increased the number of armed soldiers. They have reduced the killing but increased the risk. It’s the same equation. They are still taking activists off the streets. They are making fun of us in front of the world. They think we are fools.”

In the areas surrounding Idlib city, gunfire can still be heard every night. Local activists said an average of 20 to 30 people are being killed daily.

More from GlobalPost: Syria: How it all began with a can of spray paint

Abdul said his rebel unit has shifted from offense to defense in accordance with the UN plan. But defense, he said, is an endless effort.

As he spoke to GlobalPost, his team was called out into the streets amid the sound of gunfire.

“There is no progress. The UN vehicles have left the city now. It is a green light for the army to kill more and more,” he said.