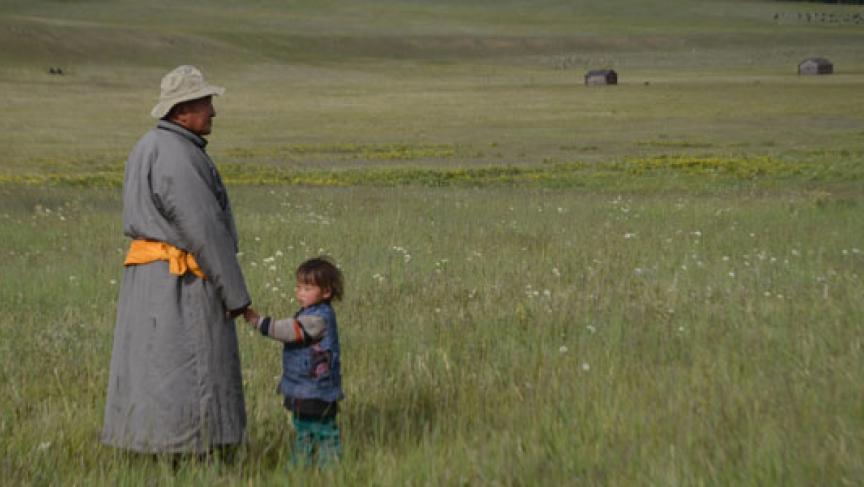 Mongolia’s nomadic herders make up roughly half the country’s population, but their traditional lifestyle is seriously threatened by climate change.

In a broad green valley near Mongolia’s border with Siberia, two Mongolian girls tend shaggy yaks while their parents invite guests into their nearby ger—a traditional round felt tent.

Inside, the hosts offer tea in tiny cups, heavily salted and made with yak milk, boiled over a crackling fire. Next come chips of dried yak cheese.

Watch a video of the Festival of Games in Mongolia at TheWorld.org.

The couple, Hurelchuluun and Bayambaa, are nomadic herders. As is common here, they rarely use a last name. They’ve tended livestock in this part of Mongolia for about 20 years. Their guests are Clyde Goulden, a scientist from Drexel University in Philadelphia, and his Mongolian wife, Tuya.

Goulden has worked in Mongolia for about two decades, and for the last few years he’s been interviewing local herders. The meetings always follow the same basic pattern — first comes the tea, then the cheese, then pleasantries, then the questions. From his methods, you might think he’s an anthropologist. But he’s actually an ecologist.

He’d been studying Mongolian forests and grasslands when he noticed that his research site had warmed up dramatically. He soon learned that since the 1940s, Mongolia as a whole has warmed more than almost anywhere else on Earth—about 4 degrees Fahrenheit. Goulden wanted to know what this meant for the region’s nomads. So he began interviewing them.

As always, today’s visit continues with standardized questions, like “have the seasons changed?

Hurelchuluun and Bayambaa tell him that the weather has gotten much worse in recent years, especially with unusual sudden cold and hot spells.

The couple also complains of changing rainfall patterns. Goulden says he hears this often — that instead of gentle, light rains that might last for two or three days, the region these days mostly gets short downpours. He says locals call these “rains that don’t wet.” Instead, the water runs off into creeks, leaving behind dry soil and poor grass.

The herders say this is a huge problem.

“If the grass is not growing well,” Hurelchuluun said, “then what the animals will eat? If the animals die, what’s the future for us?”

It’s a common lament, Goulden said. He says herders also complain it’s gotten harder to predict the weather. They used to be able to forecast and prepare for conditions by watching things like how smoke moved away from stoves pipes, what field mice stored away in autumn, or whether ibex moved to summits or valleys in winter.

“The weather has become much more unpredictable, so it’s much more difficult for them to anticipate what the next winter might be,” he said.

Despite the dismal news, today’s interview, as usual, ends on a festive note. The family invites the Americans to dinner, and offers them a local delicacy: stuffed yak intestine. Hurelchuluun breaks out his accordion, and his best vodka. They toast to friendship and long life, and sing into the night.

Goulden has had scores of such encounters. In a country with inadequate weather records and poor official information on the health of its crucial grasslands, herders have turned out to be a remarkable repository of information, about both regional climate change and how ecosystems are responding. He said they’ve noticed problems scientists had not predicted.

The interviews also illuminate the human side of the dramatic changes global warming is bringing to Mongolia.

“Almost every Mongolian can feel the impact of climate change in their daily lives,” said Erdenechuluun Zorigt, the environment adviser to Mongolia’s president.

Zorigt goes so far as to say that climate change threatens Mongolia’s future. Its potential impact on the ecology, economy and culture is that worrisome.

Such fears are shared by many Mongolian leaders. Nyamaa Enkhbold, vice chairman of the country’s Parliament, says that’s because climate-related changes are happening in Mongolia “perhaps more rapidly than any other place in the world.”

Among other things, Enkhbold says that 60 to 70 percent of Mongolian territory is already under threat of desertification. That’s bad news for the roughly half of the country’s people who still need healthy pastures to raise livestock. Enkbold says desertification could eventually wipe out Mongolia’s ancient nomadic lifestyle. Herders would have to flee the countryside, leaving behind their traditions and livelihood.

It’s already happening in Ulaanbaator, Mongolia’s only large city. The population is swelling with former nomads, whose white tents carpet hillsides around the capital. They leave herding for many reasons in this rapidly changing country, but changing weather patterns is a common theme.

It’s unlikely that this human flood will end. But ecologist Clyde Goulden hopes his research might help at least some herders find ways to adapt to their new conditions, and preserve their ancient nomadic traditions.