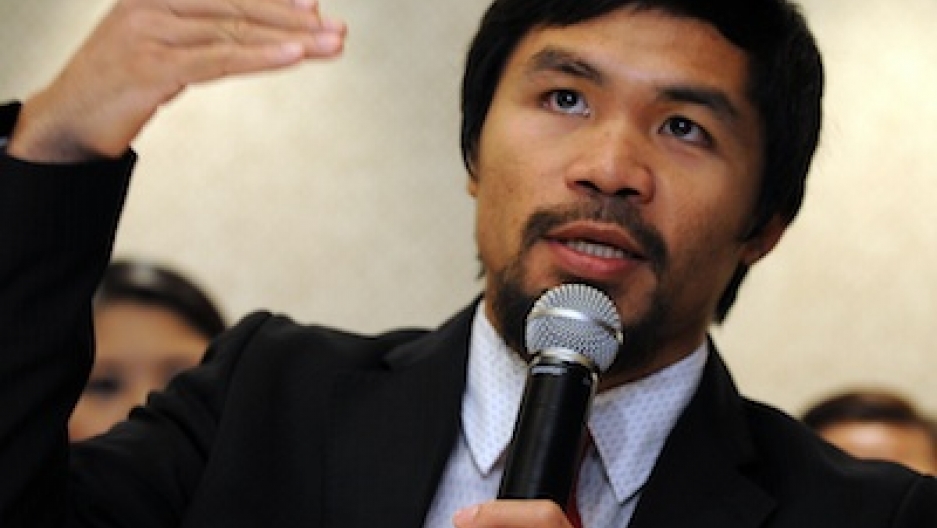 According to a slew of established American media outlets -- including USA Today, L.A. Weekly and Daily Kos-- boxing megastar and Philippine congressman Manny Pacquiao believes gay people should be executed.

How do they know?

Because that's what Pacquiao said in this interview, titled "Pacquiao Rejects Obama's New Twist on the Scriptures", which is cited as appearing in the National Conservative Examiner. The L.A. Weekly has squeezed the most from this interview with giddy reports on Pacquiao's subsequent ban from an L.A. mall and a post titled "Ten Gays Who Could Beat The Crap Out Of Manny Pacquiao."

But there are several reasons why journalists should reconsider echoing that this Nike-endorsed athlete wants all gays dead.

Here's the best one: the "National Conservative Examiner" doesn't exist.

The interview was posted to Examiner.com, a repository for "self-motivated, independent contributors" to post musings on cat care, cookie recipes, politics and other fare.

The "freelance writer" who scored the interview with Pacquiao, among the world's top celebrities, is listed as Granville Ambong, an "accredited deadline/lead writer for Maharlikan Times and the famous Philboxing.com." The latter is up and running. The former, like the "National Conservative Examiner," does not appear to exist.

According to USA Today, Pacquiao recites a Leviticus passage declaring that gays "must be put to death." But even the post's author claims Pacquiao never personally recited this quote in a follow-up column. Yes, it's quoted in the article. But Ambong was quoting the Bible, not Pacquiao.

Pacquiao, like many Filipinos, claims devoutly Catholic beliefs. His conservative politics appear to fall somewhere to the right of Rick Santorum's; he proclaimed last year that condoms are sinful.

Given that Pacquiao is an elected Philippine official, as well as a lieutenant colonel in the US-allied Philippine Army, his convictions merit more scrutiny than most wayward statements spilling out of athletes' mouths.

The first campaign to strip Pacquiao of his sponsorships is already up and running.

Only a handful of media outlets have come to his defense, including Salon, which noted the mob-like mentality about what Pacquiao didn't say has reached epic proportions. The site said, "Before you could say gross perversion of the facts, Change.org was running a petition asking Nike to drop 'homophobic boxer Manny Pacquiao,' declaring, 'In an interview published Tuesday, March 15th with the conservative Examiner newspaper, the world-famous boxer and Los Angeles resident quoted Leviticus…' And except for the fact that Pacquiao didn’t quote Leviticus, Examiner.com is not a conservative newspaper, and the interview didn’t run on Tuesday, sure."

In a statement Pacquiao attempted to defend his reputation. He said, “I didn’t say that, that’s a lie… I didn’t know that quote from Leviticus because I haven’t read the Book of Leviticus yet. I’m not against gay people… I have a relative who is also gay. We can’t help it if they were born that way. What I’m critical off are actions that violate the word of God. I only gave out my opinion that same sex marriage is against the law of God.”

Following the incorrect news of Pacquiao's views, Twitter lit up with responses, even calling for Nike to pull their endorsement of Pacquiao.