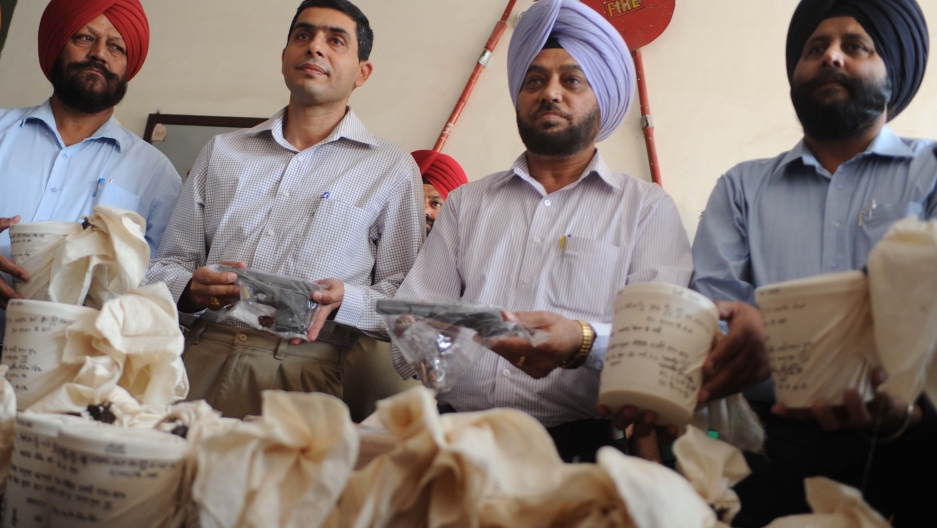 NEW DELHI, India — India's elections are notorious for bribery. But this year's state elections in Punjab drew attention to what locals say is an even more insidious problem. Instead of the usual “booze and blankets,” footsoldiers for various political parties bought votes from the state's poor by offering free opium, heroin, hashish and pills.

“There was a crackdown and huge qualities of heroin, opium, smack and poppy husk were seized,” chief election commissioner S.Y. Quraishi told the Hindustan Times. “It is an extremely serious matter.”

Few locals were surprised. Punjab's border with Pakistan has long made it the primary trafficking route for opium and heroin from Afghanistan. The crushing of the Khalistan separatist movement — here called simply “the Punjab problem” — in the 1990s left behind an alienated and disillusioned generation. And in recent years, the social fabric of this wealthy, breadbasket state has been further stretched by diminishing agricultural returns, as well as rapid urbanization that has sent land prices skyrocketing.

Since the green revolution of the late 1960s sparked its tremendous agricultural boom, Punjab has been one of India's wealthiest states. But the state was also plagued by terrorism and brutal police actions in the 1980s and 90s. Seeking to create a “land of the pure” for their people, militant Sikh separatists led by Jarnail Singh Bhindranwale derailed trains and exploded bombs in crowded markets. Eventually, Prime Minister Indira Gandhi was assassinated by her Sikh bodyguards in retaliation for her decision to send troops into the Golden Temple — Sikhism's most-revered religious site — to root out armed militants who had taken refuge there.

The reaction was swift, beginning with a massive and indiscriminate pogrom against Sikhs after Gandhi's assassination in 1984. And it continued with a ruthless and sustained government campaign against the militants. Human rights organizations say that the crackdown included rape, torture and extrajudicial executions that many believe — while it put an end to the terrorist attacks — caused other social problems that linger today.

“We are very close to Afghanistan and Pakistan, so being a transit area, the transit point has always been Punjab. But now the major part of it is being consumed in Punjab itself,” said Dr. JPS Bhatia, who has run a drug rehabilitation center in Amritsar for the past 20 years.

“All this started after the terrorism problems were over, and there was a lack of rehabilitation for the youth in Punjab. They had nothing else to do and the economy was not doing well at that time. All those youths who were unoccupied, who were not into jobs, and their education was not good, that was the time the addiction problem started in Punjab.”

Now, nobody knows how many of the state's young people are addicts. But the problem is bad enough that when a series of newspaper articles misquoted a study conducted by Guru Nanak Dev University sociologist Ranvinder Sandhu that claimed nearly three-quarters of Punjab's 16- to 35-year olds were addicted to drugs, hardly anybody batted an eye.

“As far as the extent of the problem is concerned, no study has been done,” Sandhu said in a telephone interview with GlobalPost. “There are many articles which are misquoting my study, saying that 73.5 percent of youth is hooked to drugs in Punjab. That is wrong. I studied a sample of 600 addicts, and among them I found that the majority were from 16-35 years of age. That is the 73.5 percent.”

The statistics that do exist are not encouraging. According to India's National Crime Records Bureau, the drug-related crime rate in Punjab is nearly 10 times the nationwide average. The state's deputy chief minister revealed earlier this year that Punjab accounted for roughly 60 percent of all the drugs seized in India in 2010-11. During the January state assembly elections alone the Narcotics Control Bureau and Border Security Force seized nearly 120 pounds of heroin intended for smack-addled voters.

Outreach workers also say that health problems associated with drug addiction are growing increasingly common, and the social impact of the drug trade is becoming more severe as the problem spreads.

“The HIV rate is very high. Hepatisis C is very common. We have a lot of cyrrhotic liver diseases. And because of the spread of infectious diseases tuberculosis is getting very common. Apart from that, there is crime and lots of psychological problems like depression, suspiciousness and psychotic behavior,” said Dr. Bhatia.

“What I have seen recently is that as the tenure of the addiction period in Punjab is increasing we have worse and worse cases coming up these days. Worse in the sense that the IV drug users now have infectious diseases like HIV/AIDS and tuberculosis, and they have long crime records. Most of the people who were users in the first stage have become peddlers, and they have taken up a life of crime. There is a lot of thefts and robberies, so they have a lot of complicated cases against them.”

Health workers, academics and activists said that part of the reason Punjab has failed so miserably to make a dent in the problem is because — s the use of free drugs to buy votes in the recent elections suggests — politicians, bureaucrats, police and even Narcotics Control Bureau officials from out of state are allegedly on the take, if not directly involved in the business.

More from GlobalPost: Can Ford and GM catch up in India?

“Everybody knows where drugs are being sold,” said Hemant Goswami, a social activist based in Chandigarh. “Even I have a list of at least 50 places where you can go and buy your dose. I don't think if you had an honest team and political commitment at the top level it would be difficult to control it. But then it is giving money to everyone. It's such a big trade. So nobody's interested in taking any action.”

Punjab may indeed have accounted for 60 percent of the drugs confiscated in India last year. But Goswami and other activists said that haul reflects the huge size of the local drug trade, rather than a sincere attempt at interdiction. Moreover, Goswami said that despite a spate of high-profile suspensions, drug seizures and arrests, there has been no serious or sustained government crackdown.

In 2008, Goswami petitioned the Punjab and Haryana High Court to take action against corruption in the Punjab police, arguing that top officials knew of and ignored the involvement of a number of officers in the drug trade. “There was an official admission by the state of Chandigarh that yes, our police officials are involved in the drug mafia,” Goswami said. “Everybody is scratching everybody's back. That's how this drug network is running.”

Though the case has still not been resolved, a number of police officers were suspended based on an investigation by the federal Narcotics Control Board. But not long after that supposed cleanup, the head of the NCB branch in Chandigarh, Saji Mohan, was himself busted in Mumbai with some 25 pounds of heroin and later charged with stealing confiscated narcotics from NCB headquarters, according to the Indian Express. Just a few months after Mohan's arrest, his replacement, SK Sekhri, was also arrested — charged with taking a bribe to quash a narcotics case against a local pharmaceutical company.

“It's a well known fact that there's a nexus between the police, the politicians and others who are benificiaries of this trade,” said Guru Nanak Dev University's Sandhu.

And that means it will take a near-revolution to curb the menace.