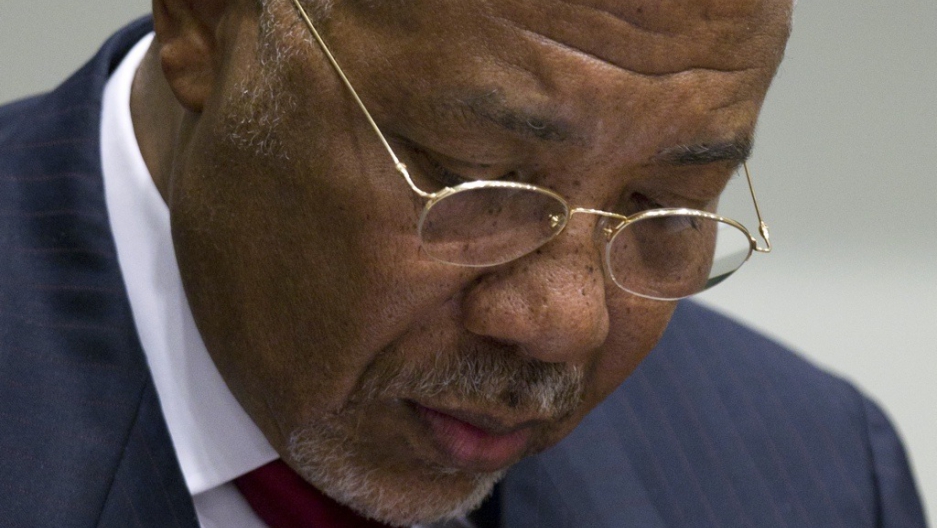 Former Liberian president and ex-warlord Charles Taylor at the International Criminal Court in The Hague, were he was found guilty of 11 counts of aiding and abetting war crimes.
Credit: Peter DeJong
Share

The former Liberian president and ex-warlord was calm and composed, and sedately dressed in a grey suit, but the charges he made were explosive.

Taylor, who has been convicted of 11 counts of war crimes, protested his innocence and charged that International Criminal Court prosecutors paid witnesses to testify against him. He was speaking at his sentencing hearing at the ICC in The Hague.

"Witnesses were paid, coerced and in many cases threatened with prosecution if they did not give statements," charged Taylor, reported the BBC.

Taylor charged that the case against him was a conspiracy by the United States and other Western powers, according to Voice of America. Taylor also questioned why former US President George W Bush, who he alleged had admitted to ordering torture, was not being brought to face a court, asking: "Is he above the law?"

In a less combative moment,Taylor said he had the "deepest sympathy" for victims in Sierra Leone, but stopped short of expressing remorse or apologizing for his part in the conflict, reported CNN.

The former Liberian leader urged the ICC judges to be motivated by "reconciliation and healing, not retribution," in deciding his jail sentence, reported The Guardian.

His lawyers are calling for a much lighter jail term than the 80 years that prosecutors have urged.

The prosecutors charge that Taylor sent arms to Sierra Leone's Revolutionary United Front rebels who carried out numerous atrocities during the civil war between 1992 and 2002 in which an estimated 50,000 people died. Taylor was accused of providing the RUF rebels with weapons in exchange for diamonds from Sierra Leone. It is the most high profile "blood diamonds" case to reach the international courts.

"The purposely cruel and savage crimes committed included public executions and amputations of civilians, the display of decapitated heads at checkpoints ... public rapes of women and girls, and people burned alive in their homes," wrote ICC prosecutor Brenda Hollis of the violence in Sierra Leone, according to the BBC.

Taylor's defence argued that he did not direct the violence by the Sierra Leonean rebels, but merely gave them support.

The sentence is scheduled to be delivered on May 30. He will serve his jail term in Britain, because of the risk of destabilization that be caused by his presence in Sierra Leone. Taylor is the first former head of state to be found guilty of war crimes since World War II.