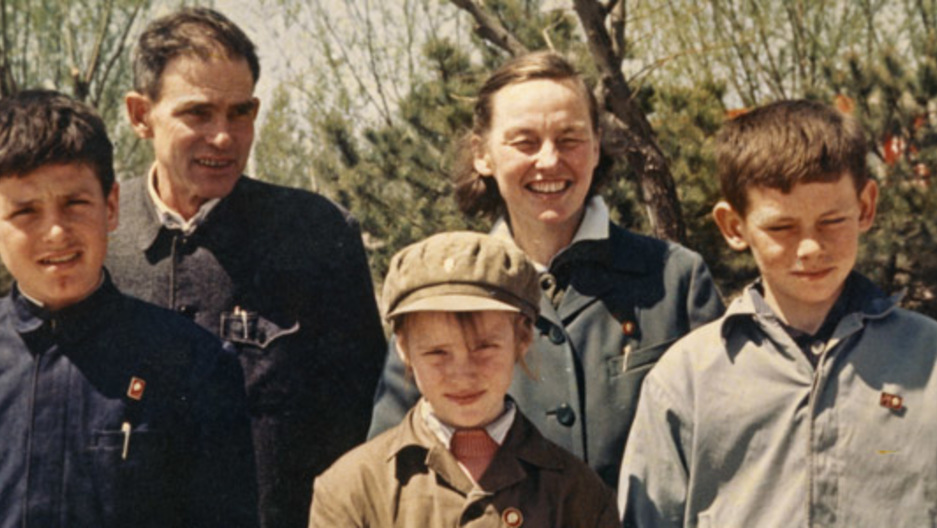 Share
When you meet Bill and Fred Engst, it's hard not to ask questions, especially when you hear them talk. They speak English with a Chinese accent. Fred and Bill were born in China, the sons of two Americans who moved there in the 1940s to be part of the Communist Revolution. They grew up on a dairy farm in Xi'an, where they were the only Americans and the only Caucasians. Bill Engst said they got used to curious looks – sometimes they'd even stop traffic. "People from the bus station have to come get us into their office to hide us so people can move away and get traffic going," Bill said, laughing. Now 57, Bill lives in New Jersey and works as an engineer. He's the younger brother, and at 6'3"³, the taller one. Like Fred, he's got grey, thinning hair, but he used to be a redhead. "You know, standard American look – red hair, tall and a big-nose. So I feel depressed at the way I looked." Bill showed me some old photos from the 1970s, when he and Fred were kids, and they looked like completely normal, even cute, white guys. But in China, Fred said, they struggled to fit in. "My parents trying to teach us English, but I see no point whatsoever to learn English." Fred teaches economics at a university in Beijing — so one brother lives in China and the other in the U.S. That's no coincidence. The brothers disagree about a lot of things and they fight, often, about world politics. Bill's wife, Jian Kao, can attest to this fact. "Sometimes when it's carried too far and they talk too long," she said, "and then we want to say stop." But at least they're talking. For many years, the brothers weren't close. Bill said it's partly because his big brother Fred was always telling him what to do, like during the Cultural Revolution, when the government sent Bill to work on a tea farm in southern China. "I didn't want to go. I was so mad. My brother criticized me for not accepting the offer. He said if government sends you to a place, you have to go. You should not ask questions, should not get to pick where you go. So I accepted," Bill said. At the time, Bill added, if you didn't agree with the Communist party line, you were just wrong. "Quite often, I'd think to myself, I know I'm wrong, but I don't know why and I don't dare to raise it up, because if I did, I'd be criticized by my brother. So I don't really open up to him." Bill said he learned to keep his doubts and opinions to himself, even after the brothers moved to the U.S. as adults. Then in 1989, Bill said, he went through a personal crisis, watching the Tiananmen Square protests on television. He said he was scared, worrying that people would run and get trampled. "At the time, I could not imagine that the Chinese government could send troops to start killing people," Bill said. "That was biggest shock I have against Chinese government and whole belief system." Since then, Bill said that he's had to rethink everything he was taught over the years. Fred also went through a period of questioning, but his happened when his marriage broke up and he reached out to his younger brother. Fred said it was a turning point in their relationship. "To be close to anybody, you need to open up yourself," Fred said. "You don't open up yourself, you can't expect other people to open up to you." Fred moved back to China in 2007, but the two brothers check in regularly on Skype, and they argue about the U.S. and China. Fred remains skeptical of the American system of democracy. "So what if you can speak up in the U.S.? If they speak up and being imperialist power, then still imperialism," Fred said. "My brother probably doesn't see that. I don't know. That's why we need to talk more." Bill also wants to chat more. "The more I talk, the more I think, the more I believe in myself, and the more I dare to challenge the past and challenge him," Bill said. He adds that all of their conversations are friendly. "We don't have any negative feeling towards each other." But these debates do sometimes dredge up painful memories. In the interviews, each brother broke down at one point talking about the past. For Bill, the trigger was being sent down to the tea farm during the Cultural Revolution. "I was very emotional," Bill said, "when I start thinking back of all the youth that got sent down in China." For Fred, it was missing the egalitarian environment of the Chinese wood factory where he was sent to work around the same time. "I would dream about the people I worked with, and I was missing so much that environment," Fred said, choking up. Each brother is trying to understand where the other is coming from, and they both say the fighting has brought them closer together, even though they're geographically so far apart.