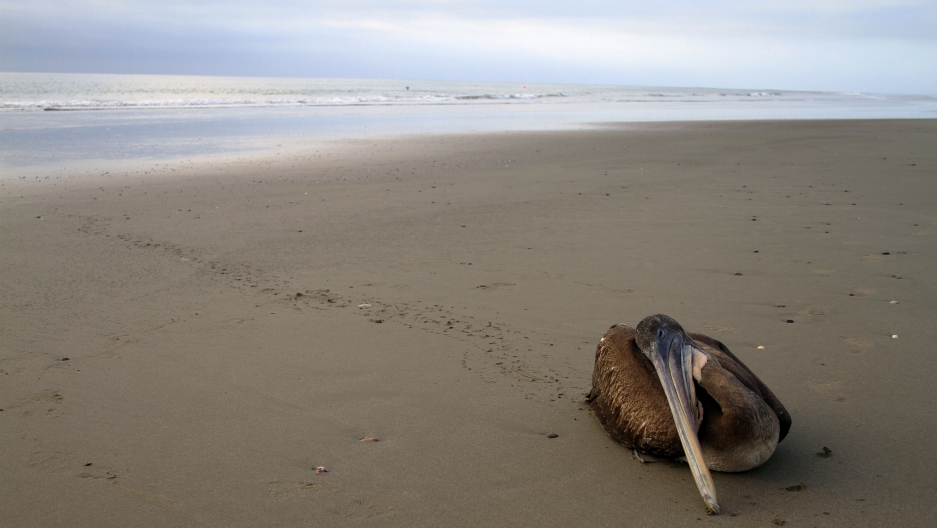 A dying pelican crawls away from the surf to die on the beach of Paita, in Tumbes, near Peru's border with Ecuador, on May 2. At first, Peruvian authorities said a virus was wiping out seabirds, but now experts say they are starving to death. A wave of warmer waters could be steering Peruvian anchovetas, which seabirds feed off, to cooler climates.
Credit: SILVIA OSHIRO
Share

LIMA, Peru — A lack of anchovies and other small fish triggered by unseasonably warm waters has left thousands of seabirds starving to death along Peru’s Pacific coast, experts say.

This month, the corpses of 5,000 birds, principally pelicans and boobies, have been discovered on beaches up and down the country, according to official government reports.

It is the second mass die-off this year in Peruvian waters, after hundreds of dolphin carcasses also mysteriously washed up on beaches in the northern regions of Piura, Lambayeque and Tumbes.

Initially, it was thought the bird and dolphin deaths might be related, and caused by a common virus, sparking mild panic and prompting many to avoid the beach during the last days of Peru’s coastal summer.

That was ruled out after government scientists confirmed the appearance of a Kelvin wave, carrying warm water from Australia to surface in the western Pacific.

The wave has forced many fish species — including the Peruvian anchoveta, a type of anchovy — to migrate to colder seas further south, leaving Peru’s seabirds with little food.

Ironically, it may have triggered a second mass die-off in Chile. More than 2,000 seabirds have died between Chile’s Cartagena and Santo Domingo beaches after becoming caught in fishing nets as they gorged on the unexpected windfall.

The Kelvin wave may be a precursor of the periodic El Niño effect, bringing unusually damp, warm weather, including flooding, to Chile, Peru and Ecuador.

Nevertheless, the seabird deaths have heightened a growing sense here of the government’s inability to manage Peru’s spectacular marine resources, including abundant fisheries.

The Health Ministry issued an alert before a virus had been ruled out advising people to avoid beaches where the lifeless seabirds had washed up. That triggered a sudden 30 percent drop in the fish sales, a staple in Peru, particularly among the poor.

“The message is clear; there is no risk from eating fish or visiting the beach,” Deputy Environment Minister Gabriel Quijandria told GlobalPost, when asked about the alert.

Yet the government’s handling of the dolphin die-off, as well as the angry resignation this month of respected marine biologist Patricia Majluf from her job as fisheries deputy minister at the Production Ministry, has left many Peruvians skeptical.

In her resignation letter, Majluf voiced frustration over the failure of President Ollanta Humala’s administration to empower her to tackle over-fishing in a sector that “for years has been characterized by disorder, corruption and the heavy influence of special interests.”

By special interests, Majluf is understood to have meant Peru’s huge fishing fleet, which has blocked her attempts to reduce fisheries quotas to what she regarded as a sustainable level.

Meanwhile, experts agree that Peru’s dolphin deaths were unrelated to the seabird die-off. But the government’s insistence that the dolphins likely died from a virus, rather than oil prospecting, has also come in for criticism.

Vet Carlos Yaipen-Llanos, of Peruvian marine conservation group Orca, has carried out autopsies on 30 dolphins and found “categorical” evidence of the animals dying from the bends — the popular term for the decompression sickness suffered by scuba divers if they race up to the surface too fast.

The dolphin autopsies revealed fractured bones in the dolphins’ ears, and blood and bubbles in their sinuses. That indicates, Yaipen-Llanos believes, that oil companies’ seismic testing — involving underwater explosions — has caused the animals to panic, surfacing too rapidly.

“We have received no pressure to rule out seismic testing,” Quijandria said, adding that Yaipen-Llanos and other environmentalists should hand over any evidence they have to the authorities.

The official toll is 877 confirmed dolphin deaths, but Yaipen-Llanos has counted 1,500 and believes that the real figure is likely much larger. “What you see on the beaches is just a small sample of what is going on out at sea,” he told GlobalPost.

Rafael Otero, a big-wave surfer, is organizing a protest march outside the Production Ministry in Lima. “The least that should have happened is that the seismic testing was suspended temporarily, until it could be ruled out as a cause of death, but no one is even talking about that,” Otero said.

Meanwhile, other citizen activists have also been doing their bit to help the seabirds. On several beaches up and down the coast, local people were handing out buckets of fish to the ravenous pelicans and boobies.

Yet, if the Kelvin wave continues, and is followed by a full El Niño effect this southern winter, that may do little to prevent a wildlife disaster on South America’s Pacific coast.

A previous El Niño, in 1972-73, along with over-fishing is thought to have seen the Peruvian anchoveta population plummet from 20 million to 2 million, triggering a mass die-off of seabirds that dwarfs the 5,000 death toll in Peru so far this year.