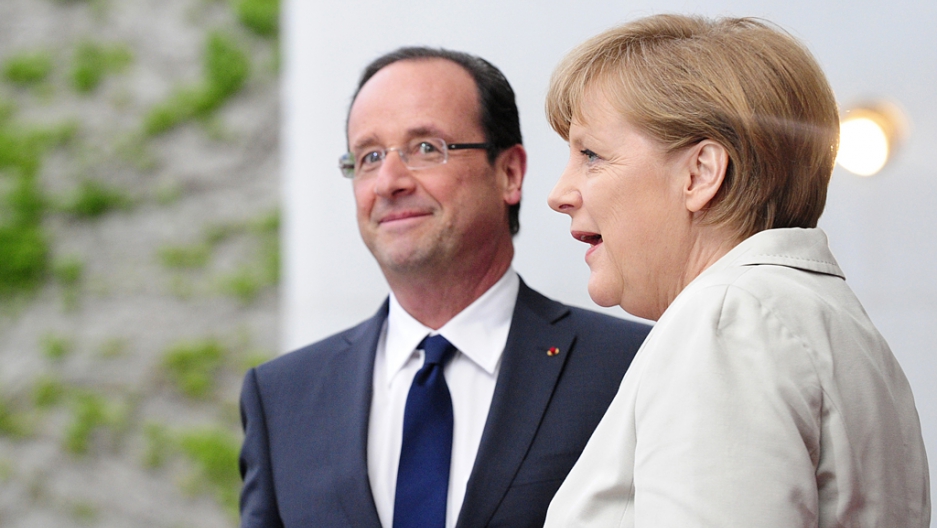 German chancellor Angela Merkel speaks with the new French president Francois Hollande as she greets him at the German Chancellery on May 15, 2012 in Berlin. Lightning hit Hollande's plane as he flew for Berlin, forcing him to turn back, and delaying his arrival.
Credit: JOHN MACDOUGALL
Share

Newly sworn-in French President Francois Hollande's plane was struck by lightning en route to Berlin where he was scheduled to meet with German Chancellor Angela Merkel to discuss Europe's debt crisis, according to the Associated Press.

No one was hurt by the incident and the plane, a Falcon 7X, returned to the Villacoublay air base near Paris for inspection, according to Defense Ministry spokesman Gerard Gachet, said the AP.

Hollande's spokesman told AFP the aircraft "could have been hit by lightning." He added that "For security reasons, it turned back." Hollande switched to another plane as a precaution, said the BBC.

More on GlobalPost: François Hollande sworn in as French president

According to the BBC, it is common for planes to get hit by lightning, and they are designed to dispel the electricity through their wingtips.

The lightning strike may seem to some like a bad omen, as Hollande and Merkel meet to discuss the Eurozone debt crisis. Hollande, 57, was sworn in earlier in the day as France's 24th president, and said he hoped that he and Merkel could "find solutions together so that austerity is not a fatality," according to The Los Angeles Times.

According to the AP, Hollande said after his swearing in, "To overcome the crisis that is hitting it, Europe needs plans. It needs solidarity. It needs growth. To our partners, I will propose a new pact that will tie the necessary reduction of public debt with the indispensable stimulus of the economy."