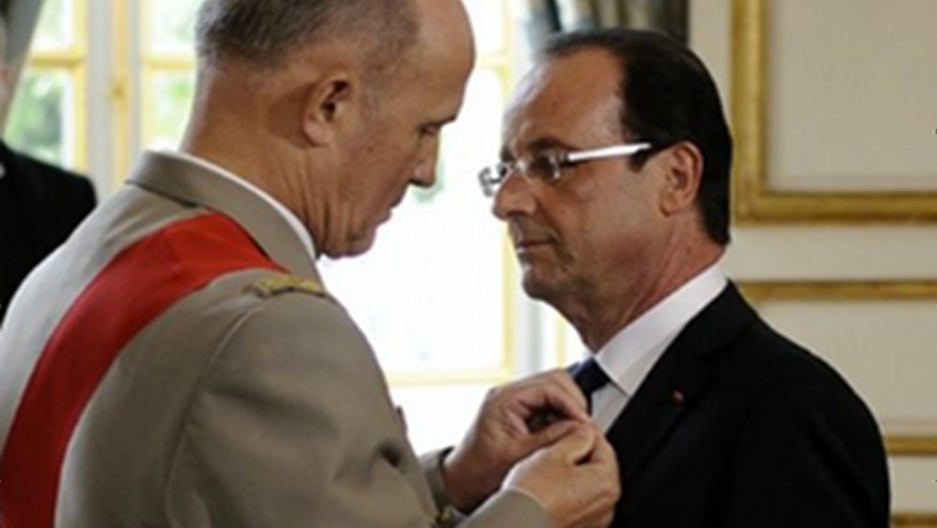 Socialist candidate Francois Hollande is sworn in as the seventh president of the fifth French republic.
Share

PARIS, France – Socialist Party candidate François Hollande was today sworn in as France's first left-wing president in 17 years, after beating Nicolas Sarkozy in a run off vote on May 6.

Following a closed-door meeting in which Sarkozy handed over the codes to France's nuclear arsenal, along with other sensitive files, Hollande took the oath of office at the Élysée Palace, France Info reported.

More on GlobalPost: How scary is Hollande, the new French president?

Holding hands and smiling, Sarkozy and former first lady Carla Bruni waved goodbye in front of the palace before getting into a car and being quietly driven away.

Hollande then gave a short speech in front of about 400 guests, in which he said he wished to deliver a clear "message of confidence".

In keeping with tradition, the 57-year-old marked the first hour of his presidency by traveling in an open-topped car along the Champs-Élysées boulevard to the Arc de Triomphe, where he laid a wreath at the Tomb of the Unknown Soldier.

Also on the agenda was lunch with former Socialist prime ministers, followed by a visit the Paris city hall to greet mayor and personal friend Bertrand Delanoe.

La Parisien reported that supporters were planning a party on the steps of the city hall to celebrate Hollande's swearing in as the seventh president of the fifth French republic.

However Hollande himself took deliberate measures to keep today's ceremony low key – in contrast with the flamboyance of the Sarkozy era. No heads of state were invited to his inauguration, and not even his children were present.

Unusually, France Info reported, the presidential motorcade that drove Hollande from his apartment in Paris's 15th district to his new home at the Élysée Palace, even stopped at red lights.

Hollande's first job as president will be to name a new prime minister – with Jean-Marc Ayrault, head of the Socialists' parliamentary bloc, the firm favorite France 24 reported.

Hours after being inaugurated, Hollande was to travel to Berlin for his first meeting with the German chancellor Angela Merkel.